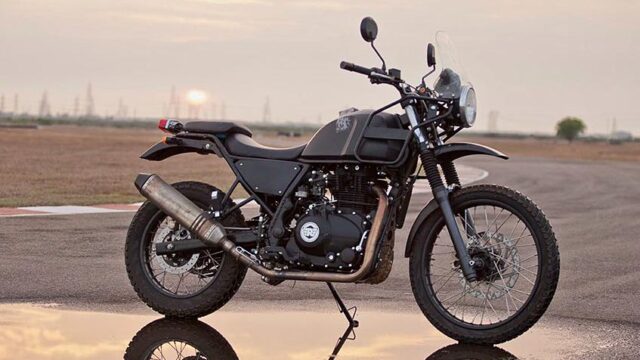 Royal Enfield announced its newest bike yesterday: called the ‘Himalayan’. Built for adventure tours and long rides, the ‘Himalayan’ brings more power at better efficiency and boasts of easy riding across a variety of rocky terrains.

The bike redesigned differently from all old models, uses a new long-stroke LS 410 engine. It is said to give you more power at lower rounds-per-minute on the wheel, hence lending stability and better balance on unpaved paths and roads.

The frame of the ‘Himalayan’ has been fashioned by renowned UK-based automotive designers, ‘Harris Performance’. The new body imbibes a mono shock suspension at the rear for smooth long rides, and is backed by an engine that can go a whole 10,000 kms without an oil change.

The ‘Himalayan’ features a 15 litre fuel tank so you can tread off-roads knowing you’d get a mileage range of around 450kms before you need more fuel. True to its promise, the bikes 220 mm ground clearance allows the rider brave through streams and riverbeds unconcerned about the undulation of his path.  To ensure you have the best control, the wheels on the ‘Himalayan’ are custom-sized for optimum-control, the seat is at a height of 800 mm doubling balance with your feet firmly on the ground. Additionally, a 300 mm disc brake at the front and a 240mm disc brake at the rear add to your control.

The ‘Himalayan’ will be available for purchase in the following cities at the mentioned prices. The prices stated are ‘on-road’ prices inclusive of taxes.

Royal Enfield’s ‘Himalayan’ has been announced in two colours ‘Granite’ and ‘Snow’: commonly also known as ‘Black’ and ‘White’.