MTV is association with Soundlogic introduced Soundbox and Twister portable Bluetooth speakers, and Boom headphones under the brand name Fashiontronix, in November last year. This month, we got a chance to review all three music accessories from MTV on our website.

Both the speakers Soundbox and Twister wirelessly connects via Bluetooth to iPad, Android, Windows Phone, Blackberry, other tables and computing devices with Bluetooth connectivity.

MTV Fashiontronix TWISTER Bluetooth Speaker, which is available in blue and black color variants (as seen on the box), Twister is one of the cool products we have ever reviewed on PC-Tablet. We reviewed the blue one, as I personally don’t think black seems that cool as blue does.

Twister is a compact and very portable speaker with rugged silicone body. Small in size and lightweight speakers, Twister’s silicon body makes it really cool and stylish that one can hold. It gives Twister a classic finish and reduces the risk of damage. As it’s very small in size, there’s always a risk of damage to the speakers. I performed a small drop test on Twister. I dropped the speakers twice on the table itself from the height of two feet, but there was no damage to the body, as it’s not plastic.

At the back, it has a MTV logo at the top and one DC 5V port to recharge the speakers via USB cable, and a built-in Auxiliary jack along with the Auxiliary cable. It has a rechargeable battery. There’s a power switch at the back, which is barely visible. In addition, we faced issues switching it on / off, as we were not sure at what level the button should be pressed.

We performed a sound test on Twister and we had no issues connecting to Bluetooth, playing songs on the same. Due to its cone like design, we get to hear the surrounding and clear sound out of the speakers. It has a wireless range of up to 30 feet and music playtime of up to 3 hours.

MTV Fashiontronix SOUNDBOX Bluetooth Speaker is also available in blue and black color variants (as seen on the box), and we reviewed the blue one. Soundbox is a portable and high performance Bluetooth speaker that provides incredible stereo sound out of the box.

One can easily enjoy their favorite music and movies on iPhone, iPod and other Bluetooth-equipped devices. The awesomeness of this speaker is on the peak, as it also offers a built-in microphone to make wireless telephone calls from your phone. It also has a built-in internal rechargeable battery packed inside. 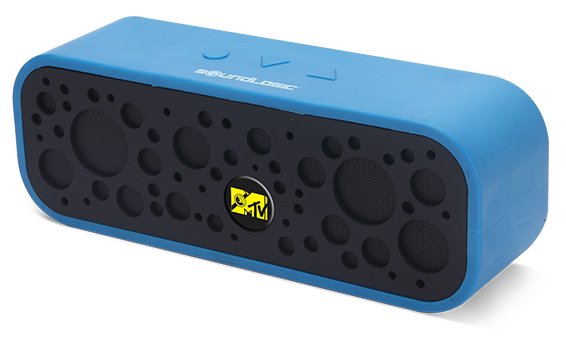 Soundbox gives sound output from both the sides. At the front of the Soundbox, it has an attractive MTV logo. At the other side, it has a power slider switch and one DC 5V port to recharge the speakers via USB cable, and a built-in Auxiliary jack along with the Auxiliary cable. At the top, it has few buttons to play and pause the songs.

We performed a sound test on Soundbox and we had no issues connecting to bluetooth, playing songs on the same. It gives a loud output unlike Twister, due to the open and dual-sided output design it has. Soundbox is priced at Rs. 3.999 on the box and the product is labeled as discontinued on Flipkart. We couldn’t even find the product available online on Croma’s website. We are awaiting the response from company on this issue and we will update our article as soon as we get to hear from MTV.

Oh wait, “simply awesome!” That’s what all I can say about this headphone. BOOM offers stereo “over the ear” straight out of the box. With adjustable headband, it offers the large cushioned earcups for comfort and isolated sound. It even offers a built-in microphone for hands-free audio calls along with 3.5mm audio jack compatibility. 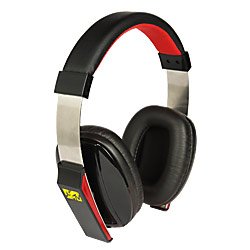 Available in blue and black color variants, Fashiontronix Boom is priced at Rs. 1,499 on the box and available to purchase online on Croma’s website.

Hands-on with Fashiontronix Twister and Soundbox