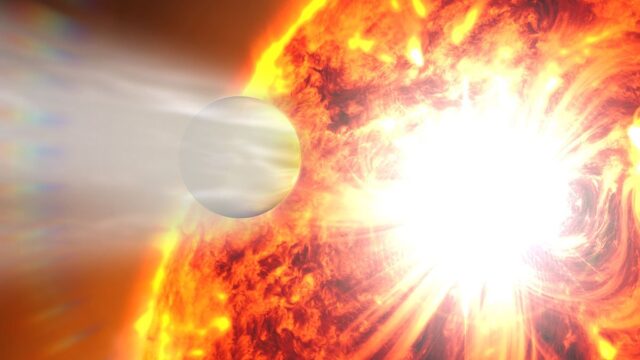 The team of astrophysicists from the universities of Geneva (UNIGE), Bern, and the Planets National Center of Competence in Research (NCCR) have discovered an Exoplanet HD189733b with internal heat of around 1650 Celsius and a wind speed of 1000 kms.

It is for the first time that an exoplanet with such a high-intensity heat and wind speed has been found. With its highly turbulent and unpredictable atmosphere, it is almost impossible to carry out a close study of this exoplanet.

According to the researchers, the discovery of this exoplanet has now opened the possibilities for studying varying atmospheres of different exoplanets.

Researchers depended upon two different approaches for studying the atmosphere of the exoplanet. This helped them verify the outcome twice establishing the veracity of the facts found. For the first approach, the astrophysicists used spectrometer-HARPS whereas for the second approach, the researchers made use of a completely new model for interpreting the sodium lines of the exoplanet.

Until now, more than 700 exoplanets have been discovered. One of the difficulties in their discovery is that you cannot observe them directly. Their existence is judged by the interference these exoplanets causes to the stars in their near orbits. Even then, over the last decade, researchers and astrophysicists have become quite adept towards discovering such exoplanets.

One of the most remarkable exoplanet to be discovered is the Epsilon Eridani. It is located ten light-years away from the earth. This planet is almost similar to the gas giant planets in our solar system like Saturn or Jupiter. However, it has not been known until now whether it also follows a regular orbit that moves it closer and far away from its star.

The presence of two asteroid belts surrounding the Epsilon Eridani has indicated that there can be earth like planet inside the belt of its solar system.