After shaking the budget segment, Realme is now eyeing the upper mid-tier segment by going after the likes of OnePlus and Xiaomi with the launch of the new RealmeX2 Pro. Following the trend set up by OnePlus, Realme X2 Pro also claims to be a flagship killer coming in at a starting price of INR 29,999.

Packed with the latest Qualcomm Snapdragon 855 Plus SoC, along with a quad-rear camera array, the Realme X2 Pro at least on the paper seems to be a compelling deal. We have been testing out the smartphone for a little over 2 weeks now and here’s our full review.

Before starting with the Realme X2 Pro review, let’s have a glance at the phone’s specifications, pricing and things we get with the device. 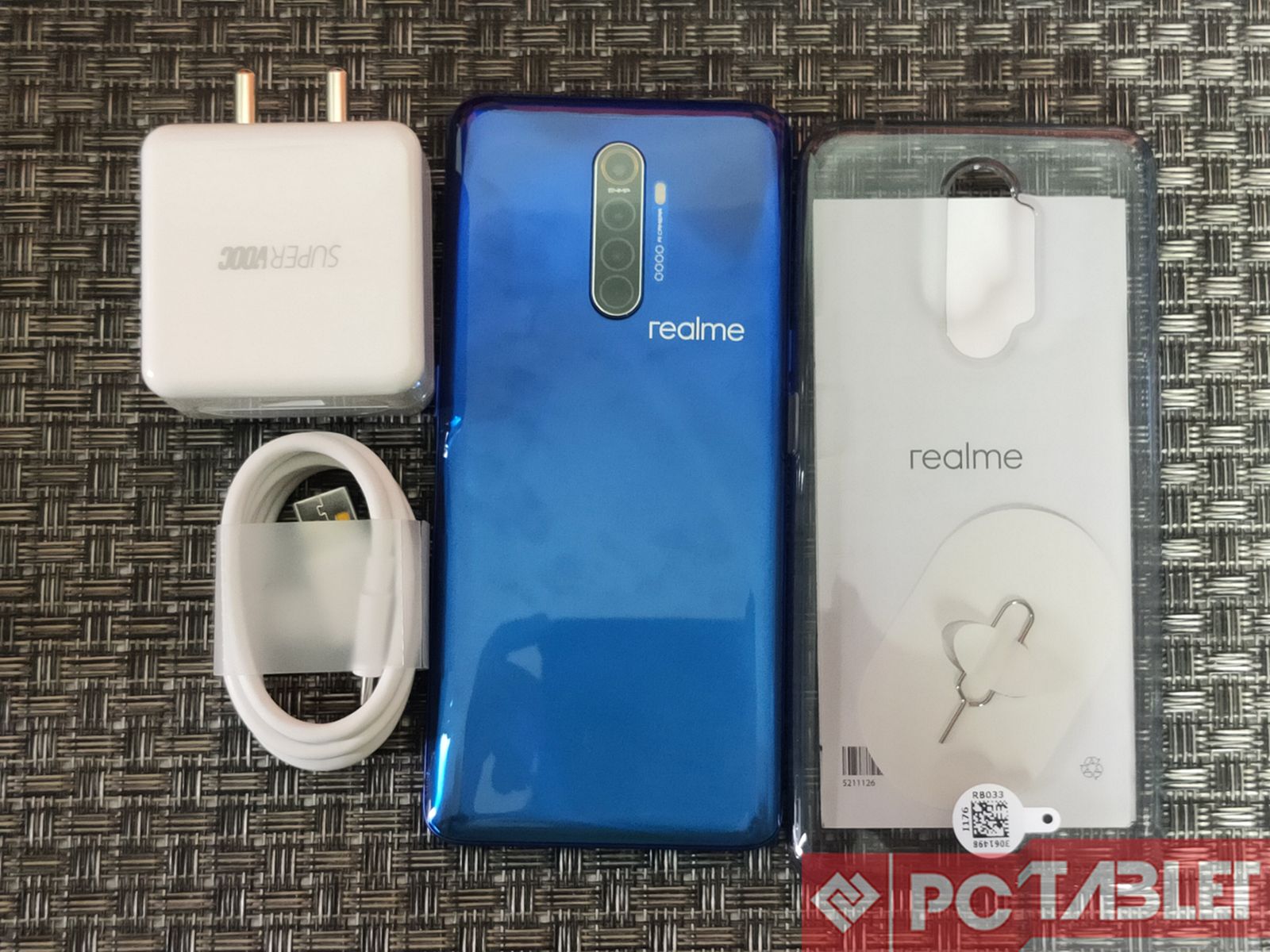 There’s a lot going on when it comes to the design and build of the Realme X2 Pro. With this new smartphone, the brand has finally moved beyond the polycarbonate and gone for a much more premium aluminum and glass build. There is gorilla glass 5 on both the front and back which makes the phone slippery and prone to smudges but adds a character to it at the same time. 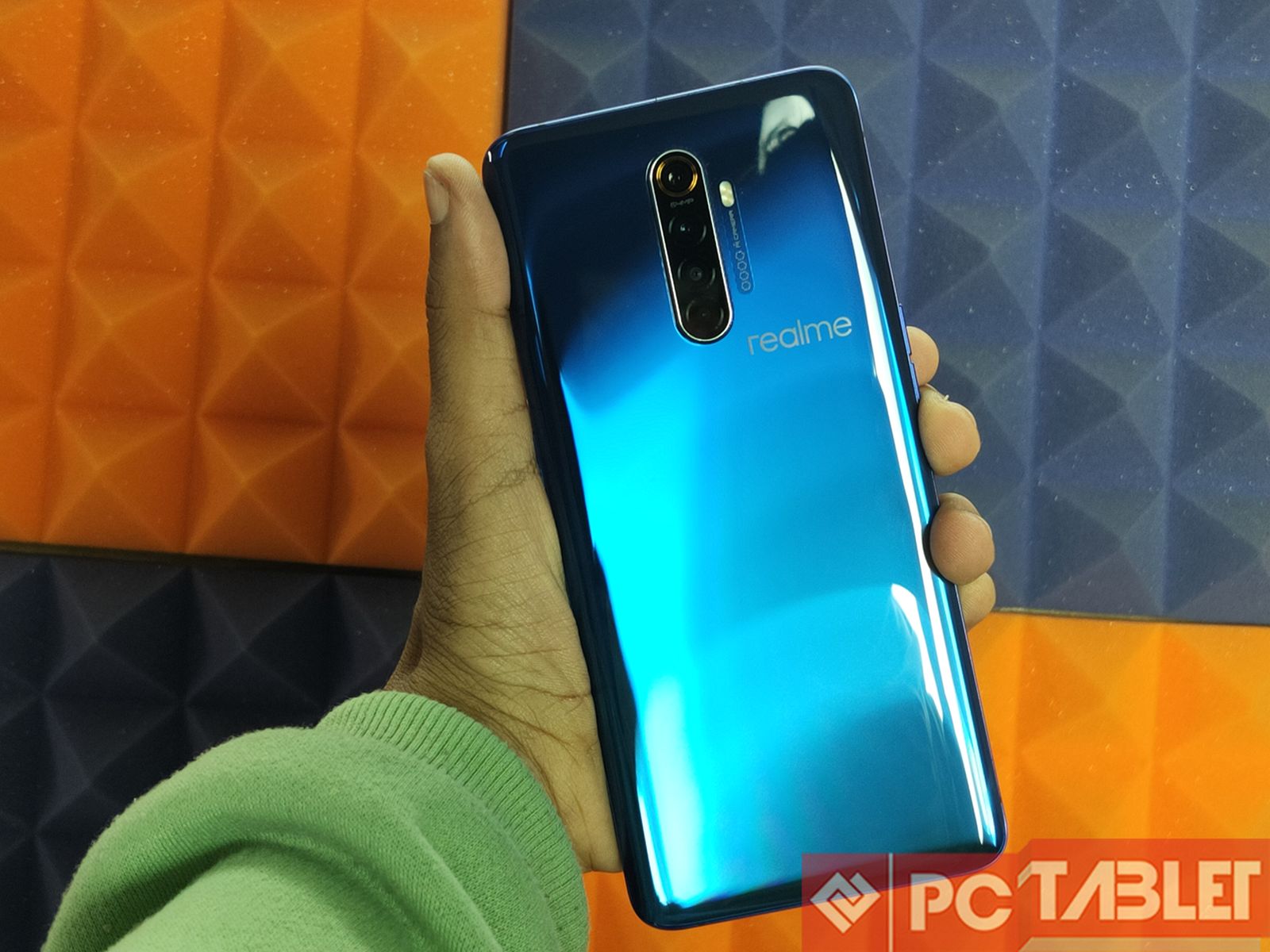 The X2 Pro comes in two color variant Neptune Blue and White, along with a Master Edition, in ‘Red Brick’ and ‘Concrete’ finishes. Starting from the back, you get a quad-camera array placed vertically in the middle with the Realme logo adjacent to it, which is a bold move. Coming to the button placement, the power button is on the right while the volume rockers are on the left side. You’ll find the headphone jack, a USB Type-C port, and a speaker on the bottom, while the earpiece on the front also acts as a secondary speaker for stereo sound.

On flipping the phone, you see the massive 6.5-inch AMOLED display on the front with a dewdrop notch and very minimal bezels all-around. Since it’s an AMOLED display, you get a standard optical in-display fingerprint sensor.

The Realme X2 Pro gets a 6.50-inch Fluid AMOLED display with an FHD+ resolution and a 20:9 aspect ratio. This is similar to what we have seen on the OnePlus 7T as well. The ‘Fluid’ nomenclature in the display tech refers to the 90Hz refresh rate panel being used here. 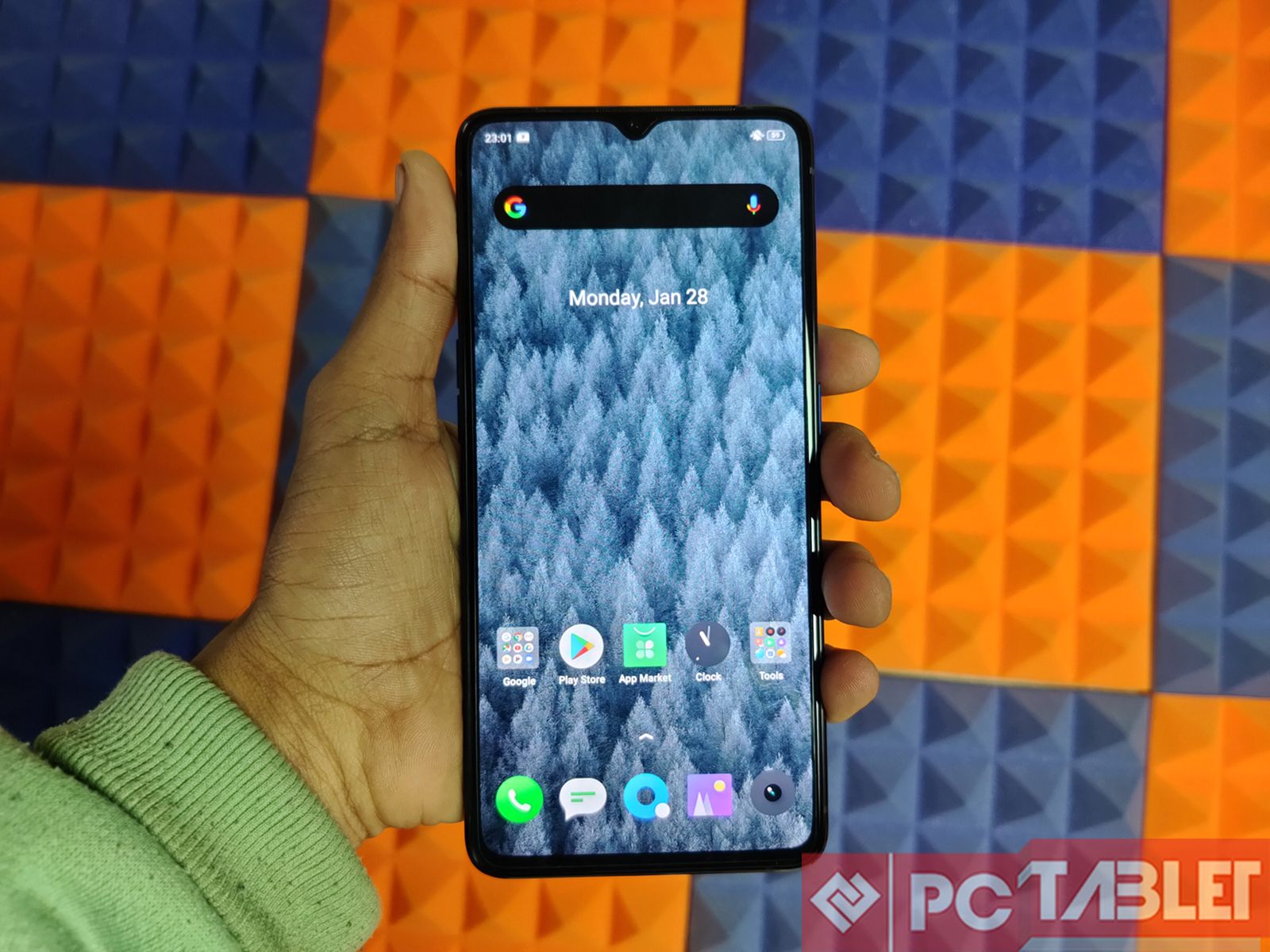 The display is sharp, viewing angles are good, and the colours have good saturation. When turned on, the 90Hz refresh rate makes the phone feel smoother and faster, especially when navigating through UI, or playing certain games.

The display on the X2 Pro is HDR10+ certified and offers a peak brightness of 1000nits making the outdoor legibility even better. Overall, the display used here is great and would satisfy your content consumption needs.

On the software front, the Realme X2 Pro runs ColorOS 6.1, based on Android 9 out of the box. While all new flagships are coming out with Android 10, this seems odd but Realme says that the phone will get the new Android update sometime in the future. Now ColorOS is a very heavily customized skin, providing gestures, and shortcuts. Like previous Realme offerings, you get the same look and feel along with a bunch of pre-installed apps. 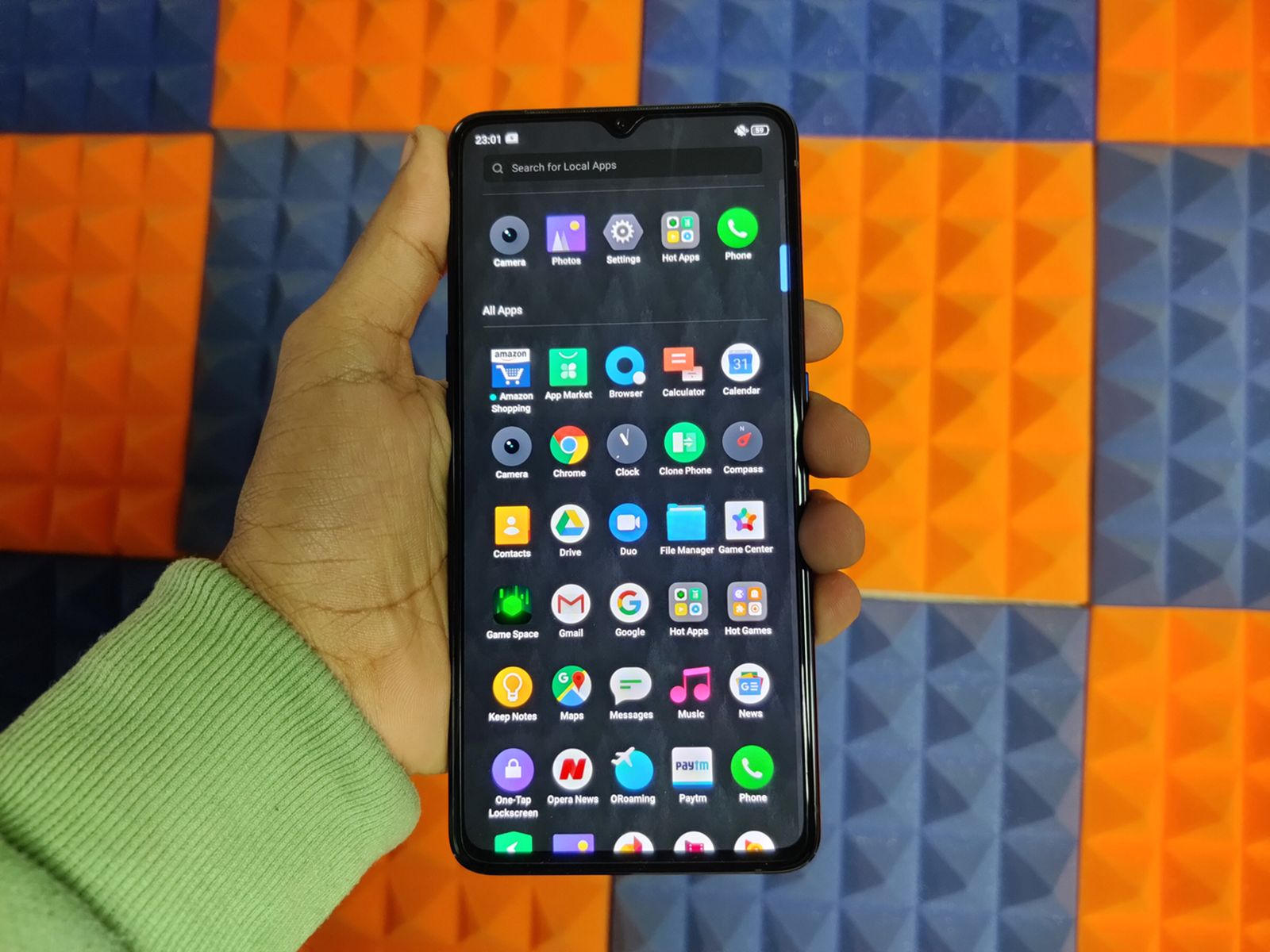 There’s a Dark mode present along with the Digital Wellbeing for all the cautious people folks out there. The X2 Pro also has Widevine L1 DRM certification which means there are no restrictions on the streaming resolution in apps such as Netflix.

The phone is a proper flagship and it reflects in the hardware choice as well. The Realme X2 Pro comes with top-of-the-line hardware, packing the latest Qualcomm Snapdragon 855+ SoC at its core. It is further coupled with 8/12GB of RAM and 128/256GB storage configurations. Our unit came in the 8+128GB configuration. You also get the faster UFS 3.0 storage on the X2 Pro which is a first from the brand. 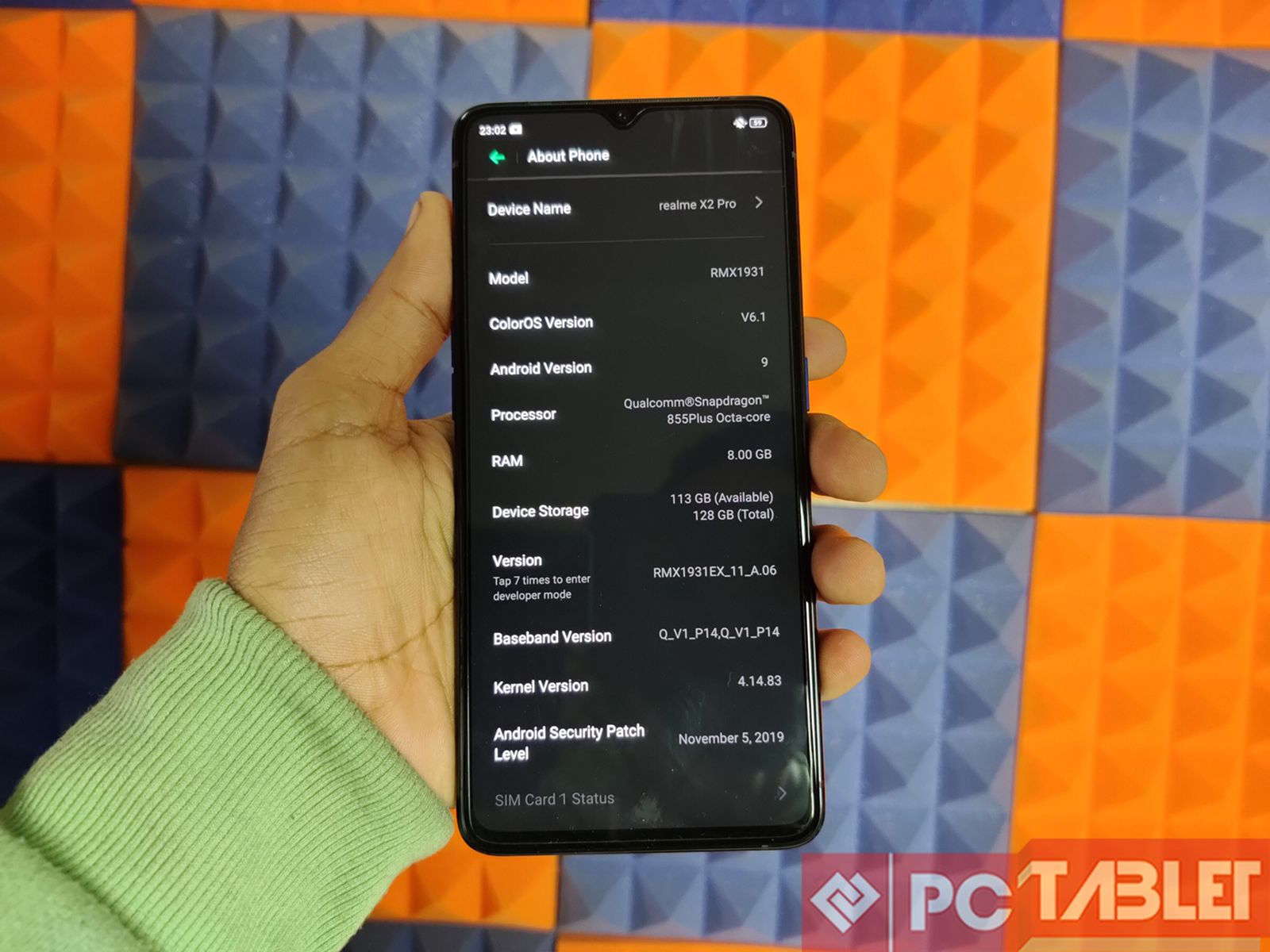 As far as the real-world performance is concerned, the phone simply flies through anything you throw at it. It feels super snappy and agile in almost all tasks, be it opening heavy apps or multitasking with a dozen of them. The speed is also evident while browsing the web, clicking pictures and flicking through apps.

The phone comes with vapor chamber cooling, which keeps the thermals under control even when stressed over long hours of gaming. We tried playing PUBG Mobile at HDR and ultra-settings for an hour, followed by a couple of matches in COD Mobile and there were no issues whatsoever.

The only gripe we have is with the sheer weight of the phone and the lack of expandable storage.

The Realme X2 Pro boasts a quad-camera setup on the back, with the same 64-megapixel f/1.8 primary camera as the Realme XT. A 13-megapixel telephoto camera is capable of 2X optical zoom and 5X hybrid zoom. There’s also an 8-megapixel wide-angle camera with an f/2.2 aperture and a 115-degree field of view, and finally a 2-megapixel depth sensor. 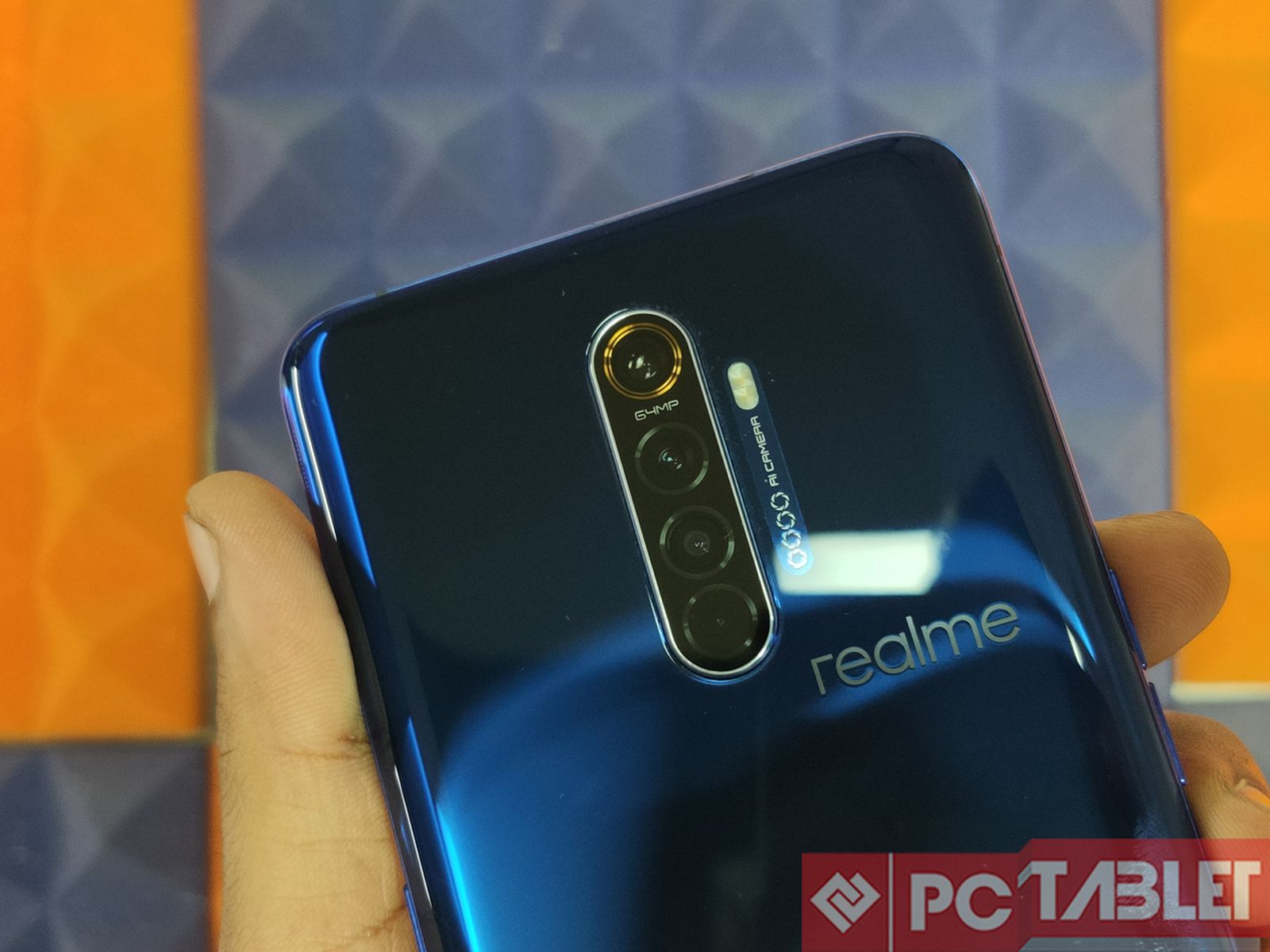 The primary camera shoots very good images in daylight with an ample amount of detail (could’ve been better), sharpness and color accuracy. The dynamic range is good as well with balanced levels of exposure. By default, you get 16-megapixel shots with the added option to take a 64-megapixel shot. Portrait mode worked well too, with good edge detection. 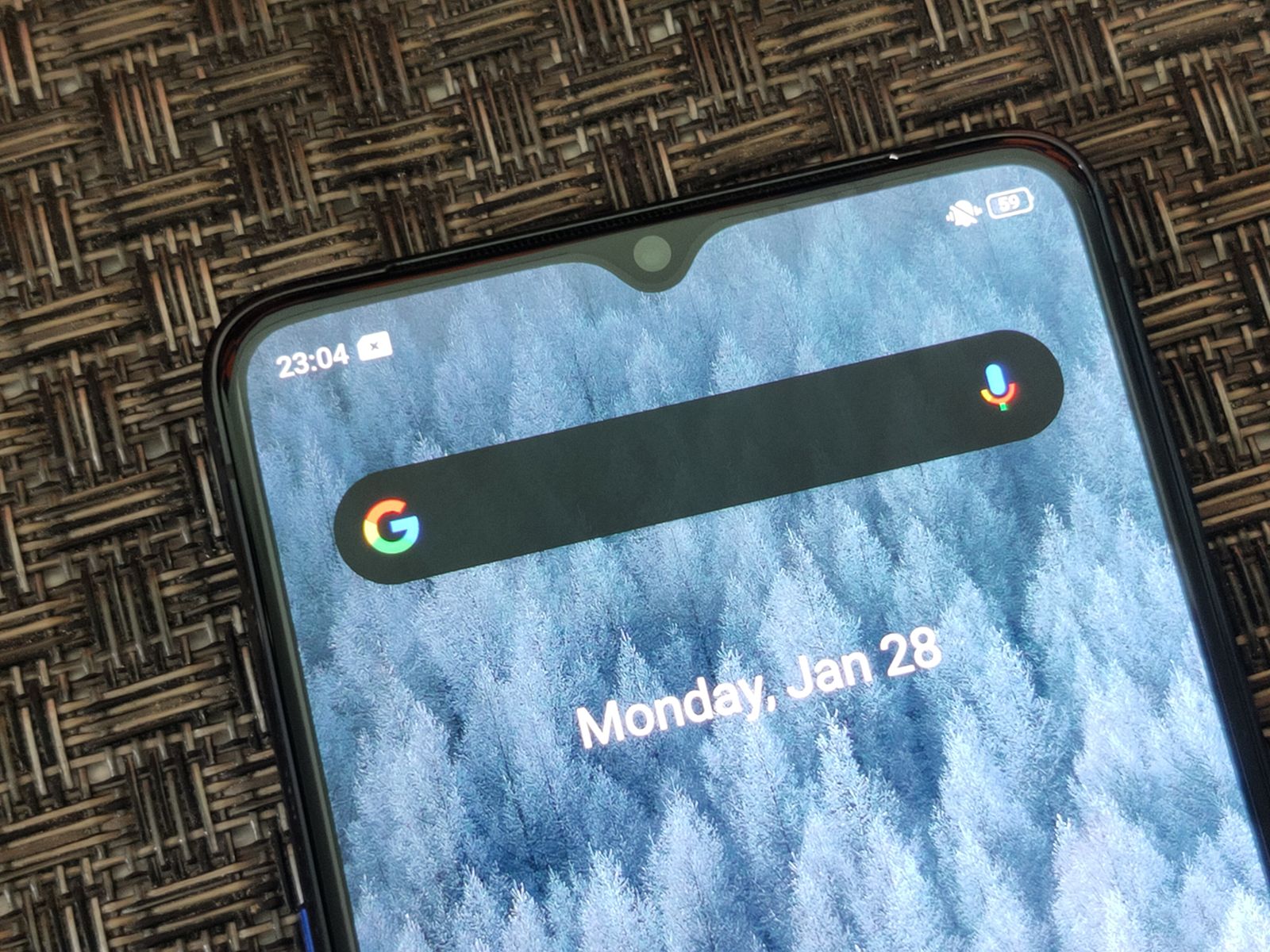 The telephoto camera captured good details and colors in daylight. The 5x hybrid zoom worked well and managed decent levels of detail under good light. The wide-angle camera too produces passable results but only in daylight with minimal distortion around the edges.

In low light, photos captured by the primary camera looked good. There was good detail, colors were punchy, and the noise was under control. Nightscape mode worked as expected and brought out a decent amount of details in low-light environments. There is no optical image stabilization (OIS) on either of the camera modules which is a led down but you do get standard Electronic image stabilization (EIS). 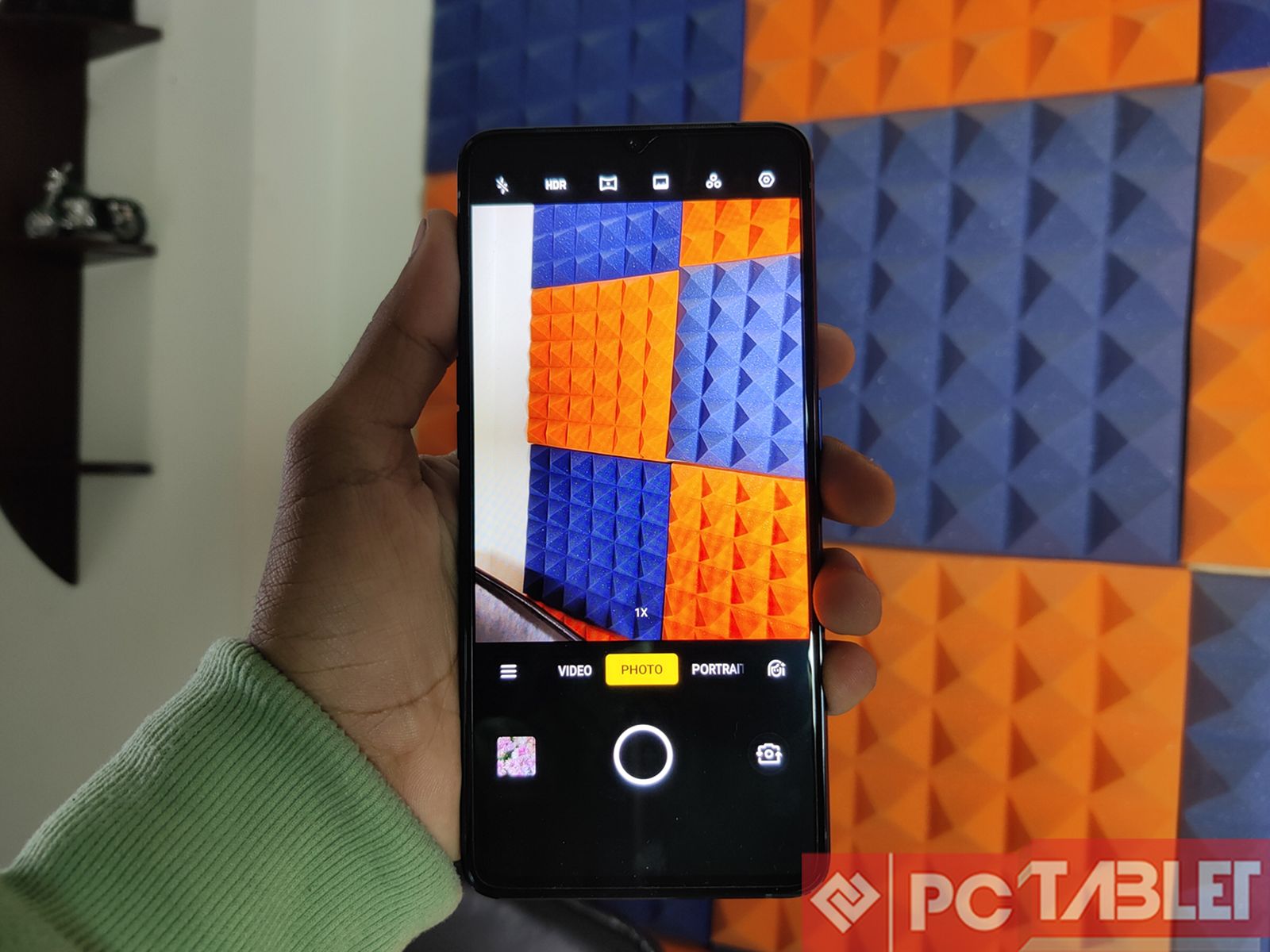 There is a 16-megapixel selfie camera tucked inside the dewdrop notch. In our tests, we found this module sub-par with even budget smartphones performing better than this. Exposures were a bit of a hit-or-miss and HDR didn’t help either. You do get a screen flash option which is nifty when getting low-light selfies.

On the video front, you get the option to shoot up to 4K 60fps videos. The lack of OIS is apparent here but the Ultra Steady did help in getting some decent 1080p videos out of this phone.

The X2 Pro packs in a 4,000mAh battery, which is decent for a smartphone of this caliber. The 90Hz refresh rate mode does take a toll on the battery but you need to sacrifice some juice to get that butter-smooth experience. On average, we easily got about a day and a half of runtime on a single charge. 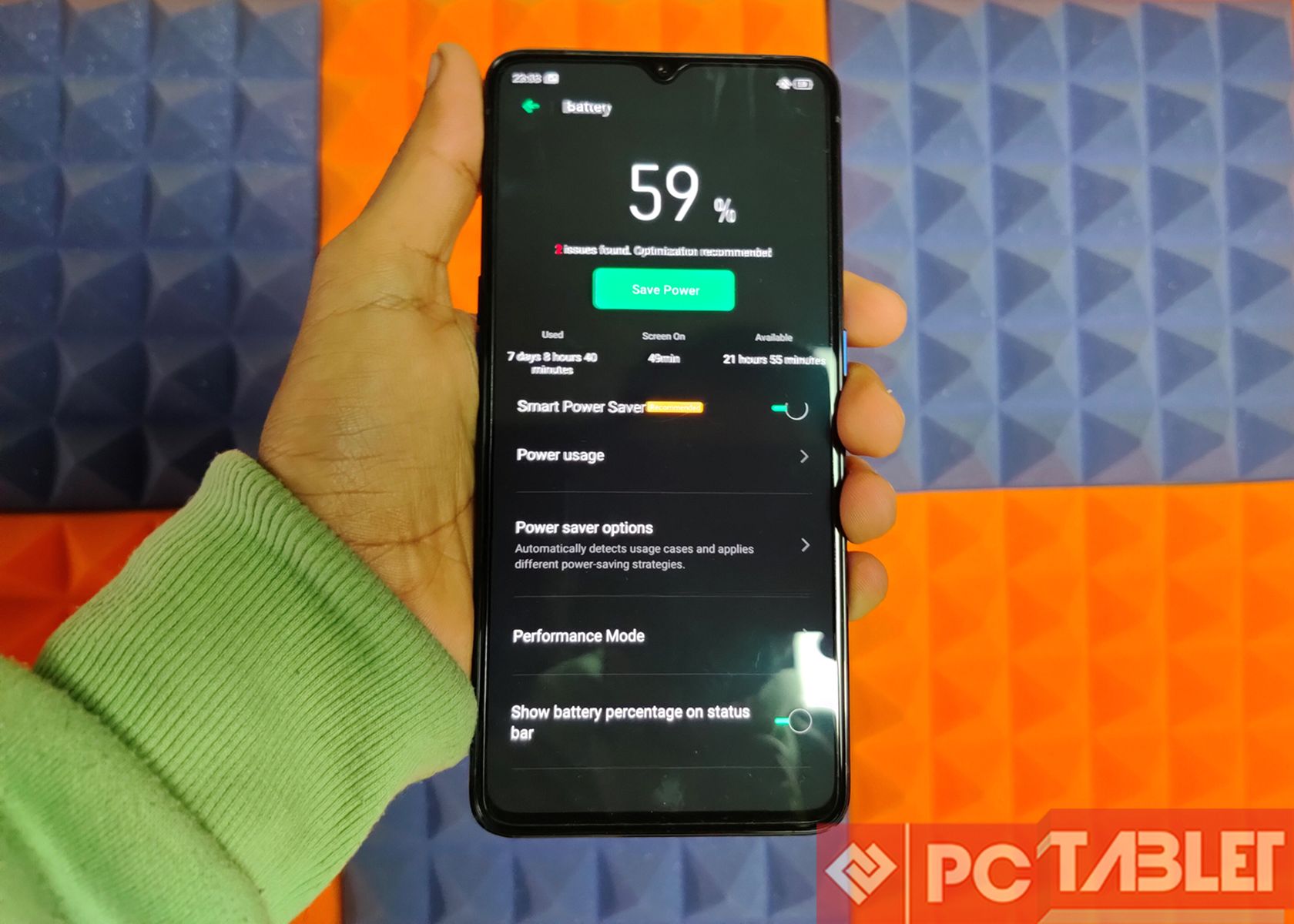 The talk of the town is that SuperVOOC 50W charging tech that the phone uses. With the bundled SuperVOOC charger, we managed to fully charge the battery from zero in only about 35 minutes which is nuts. 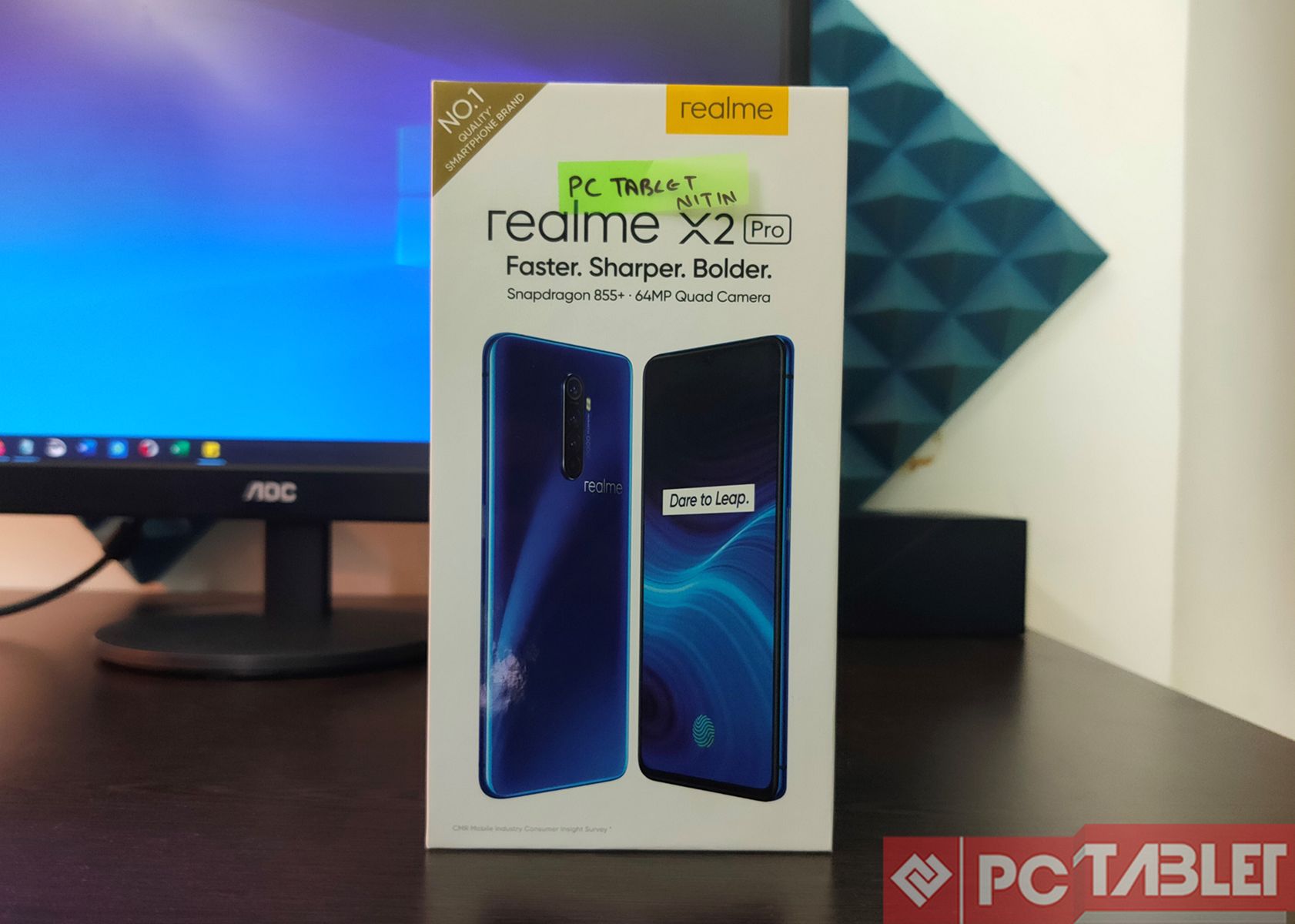 The Realme X2 Pro is a great offering at INR 29,999 undercutting the OnePlus 7T by a margin while providing the same set of features and overall experience. Being said that, the phone does have a few shortcomings, like the lack of expandable storage, sub-par selfie camera performance and lack of OIS support.

Keeping these shortcomings aside, we did enjoy the excellent build quality, a vivid 90Hz display, a versatile set of cameras, loud stereo speakers and super-fast charging.

So if you’re in the market looking for a flagship smartphone at a cut-throat price then look no further and grab the X2 Pro.