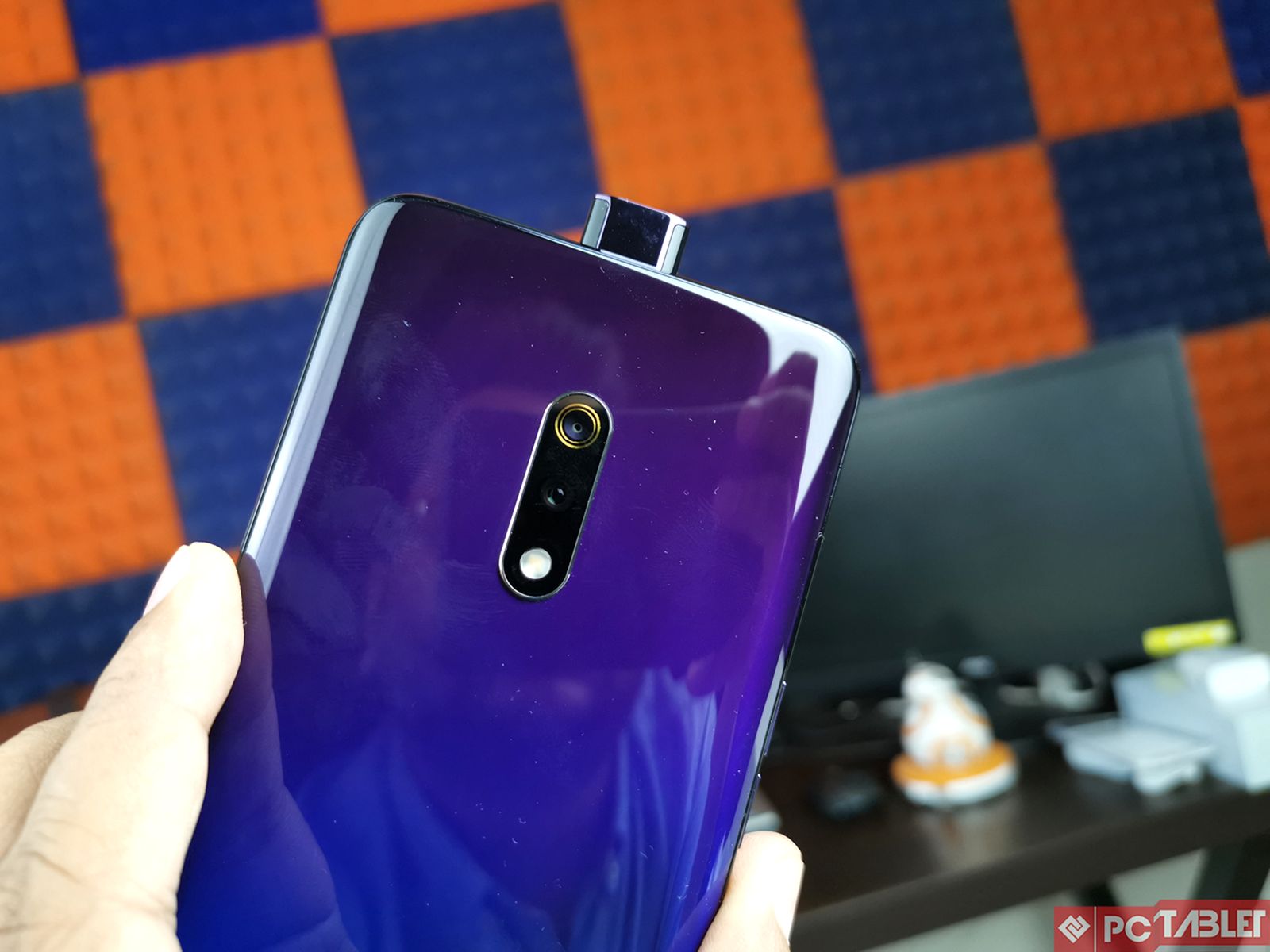 Realme lately launched its flagship smartphone dubbed as Realme X in India. Priced at INR 16,999, the device tends to grab a sweet spot between the pricing of a mid-range smartphone and a premium device. In fact, the phone offers everything one would need, right from a great design, pop-up cameras, an in-display fingerprint scanner, smooth performance and more which look quite tempting at least on paper.

So does the Realme X worth paying a fraction more over the Realme 3 Pro (Review) or the Vivo Z1 Pro? Let’s check out the same in our full Realme X review.

Before starting with the Realme X review, let’s have a glance at the phone’s specifications, pricing and things we get with the device.

As you’d acknowledge, the Realme X stands with the contemporary design language of current mid-range smartphones. It comes with a beautiful, shimmering polycarbonate back panel that houses a centred dual camera module along with an LED flash. It also gets a gold ring accent circling one of the modules, akin to the Realme 3 and 3 Pro. WAnd while there’s a significant camera bump, the phone doesn’t really wobble on flat surfaces due to its symmetrical location.

Notably, the device is available in two colour options- Steam white and Punk blue. The latter we have here shows off a gradient blue finish at the back, with a subtle purple hue emerging on the top. In fact, even the frame has the gradient applied to it to match the overall colour scheme.

While the rear looks quite good, the front is what most will demand to have at this price. Notably, the phone flaunts an all-screen notchless display without any annoying cutouts, making up for an immersive experience. However, it does have minimal bezels running all around the corner, followed by a significant chin at the bottom.

Furthermore, there’s an in-display fingerprint scanner which works quite well and is positioned at a comfortable spot. As one of the USPs, the Realme X also gets a motorised pop-up camera centred on the top frame. The module is said to be good for at least 2,00,000 operations and is also claimed to be covered by sapphire glass for added durability. Similar to the OnePlus 7 Pro and Redmi K20, Realme has implemented smart fall detection to retract the camera automatically in case of a free fall.

As for the placements, the power button is located well in reach at the right while the volume rockers are given to the left. The dual nano Sim slot is placed right above the power key while the USB Type-C charging port, 3.5mm audio jack, speaker grille and the primary mic sit at the bottom. The secondary mic, as expected, is present on the top, and the earpiece is stuffed where the glass meets the frame. Note that the phone skimps on two major things, including the SD card slot and a notification LED. Anyways, you do get plenty of storage onboard so expandability shouldn’t be an issue for the most part.

With a peak brightness of 450 nits, we had no issues while using the phone under bright sunlight. And thanks to the impressive screen-to-body ratio of around 86%, the phone offers more than enough viewing space for enjoying non-stop media content.

While our unit is only certified for Widevine L3, Realme has clarified that the final retail units will ship with Widevine L1 certification. Consequently, you will be able to stream HD content on services like Netflix and Amazon Prime Video.

Under the hood, the phone gets powered by the same octa-core Qualcomm Snapdragon 710 SoC, present on the Realme 3 Pro. We have the base model with 4GB of RAM which performs day to day tasks flawlessly, no matter what you throw at it.

Also, we didn’t face any issues while playing heavy games like PUBG Mobile and Asphalt 9 on the device. The games were playable at high settings while keeping graphics on medium aided for a more smoother experience. Over the extended hours of gaming, the phone managed to keep a consistent frame rate, without showing any heating issues. However, the ColorOS, being a non-resource-friendly UI, tends to slow down the phone at times, especially while multi-tasking. Nothing serious, though.

The company’s custom skin, i.e. ColorOS, has gone through specific changes in recent times to comply with user feedback. Yet, we found the UI, especially the specific parts including the notification panel, settings, home screen icons and more to be funky and annoying for those who love simplicity.

Fortunately, with the latest ColorOS 6 based on Android 9 Pie, you now get an App drawer which can be revealed by a simple swipe on the home screen. Furthermore, you get to choose between Pixel-styled pill gestures or the new full-screen gestures for a more immersive experience.

The UI also includes several motion and screen gestures to play around. And amongst other features, we have several modes and added tweaks including Smart Driving, Smart Assistant, Game Space, Clone Apps, Private Safe and more. However, note there’s a is a lot of bloatware to be found here with a stack of preloaded apps that you may never use. Thankfully, most of them can be uninstalled in the settings.

Evidently, the UI is a highly skinned and customizable version of Android. Hence, if you’re someone like me who loves stock Android, then you’re definitely going to have a hard time getting used to the ColorOS.

For photography, the Realme X gets a 48-megapixel Sony IMX586 with f/1.7 lens as its primary sensor paired with a 5MP depth sensor at the back. While on the front, it has a motorised 16MP pop-up camera for selfies.

As for the image quality, the Realme X takes some impressive pictures in broad daylight with a lot of detail, sharpness and high dynamic range. Images tend to pop-up with punchy colours and have a contrasty feel- the way most would want it to be. By default, the camera shoots 12MP photos. However, you do get an option to take 48MP shots which tend to have slightly better details, provided that you have enough light.

In low-light too, the camera performs satisfactorily well, and while some details were missing, the overall pictures turned out to be sharp enough. The Nightscape mode further helps in clicking a tad more sharper and brighter images.

The selfie camera is again, impressive and produces sharp images with a right amount of detail and accurate colour reproduction. The portrait shots, while not being as good as the ones from the rear, are fine for the most part with spot-on edge detection.

The Realme X can shoot 4K videos at up to 30fps. Sadly, the phone just can’t record 4K@60fps, which might be a bummer for some. Nonetheless, the overall video quality is quite good for the price with EIS doing a good job of stabilisation.

We also have a 960fps Super Slo-mo which seems to be a slowed-down version of a 240fps video. As a result, the end footage looks quite choppy and is far from what we’d call a Super Slo-mo clip.

The Realme X gets powered by a moderately large 3,765mAh battery which is capable enough to last around a day of medium to heavy use. In our usage, we were able to stretch the device over a full working day on a single charge, predominated by video streaming, listening to music, playing some casual games and GPS navigation.

Overall, the battery life isn’t as great as the Redmi K20, or even the Realme 3 Pro, but then again it’s not something we’d term as bad. For those worried about charging times, the Realme X comes with VOOC 3.0 fast-charging capability and a 20W adaptor in the box which pulls it straight from 0 to 50% well under 30 minutes. A full charge, on the other hand, takes a little over an hour.

Realme X Review Verdict: Should you buy it?

The Realme X seems to be a perfectly balanced smartphone with an adequate dose of performance, beauty and cameras that one could demand at a starting price of Rs. 16,999. So, if you already have a budget of around Rs. 15,000 and planning to settle with the Realme 3 Pro, Vivo Z1 Pro or the Redmi Note 7 Pro, spending just a little more will get you a far better Super AMOLED display, an in-display fingerprint scanner, a pop-up camera, better rear cameras, and much more- worth it right?

But then again, there are certain flaws which tend to spoil the overall grandeur of the device, including the annoying ColorOS, lack of microSD card & notification LED, followed by the not so good battery life. Also, we expected a better processor, at least Snapdragon 730, or even 712 would have done the job. Anyways, there’s very little to complain about, considering the fact that the Realme X costs almost Rs. 5,000 lesser than the Redmi K20’s base model.