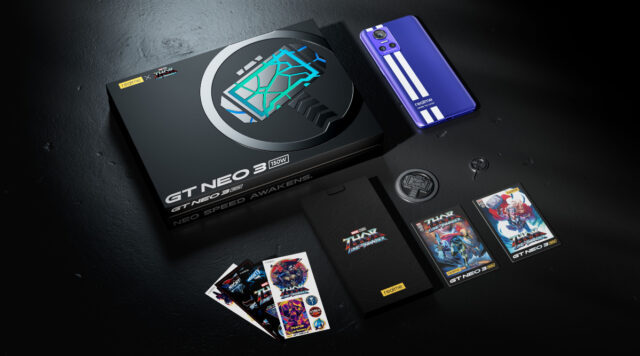 realme, the Most Trusted Technology brand, has announced the debut of its realme GT NEO 3 150W Thor: Love and Thunder Limited Edition, with the aim to provide an unrivaled experience of speed and power for realme and Marvel fans in India.

Highlighting the collaboration, Mr. Madhav Sheth, CEO –  realme India, VP – realme, and President – realme International Business Group said, “We are excited to collaborate with Marvel Studios’ Thor: Love and Thunder for realme GT NEO 3 150W, which is created keeping in mind the needs of India’s young, dynamic and vibrant consumers. realme, a consumer-centric brand, has spread a dare to leap attitude worldwide and is adored by young millennials. GT NEO 3 150W, the world’s fastest charging flagship, reflects the spirit of adventure, speed, and unlimited power. This collaboration is another step towards our commitment to offer a leap-forward experience to our users with the flagship series.”

Taking a leap forward with the collaboration, realme released realme GT NEO 3 150W Thor: Love and Thunder Limited Edition with a premium gift box, that includes realme GT NEO 3 150W smartphone, as well as customized Thor: Love and Thunder themed cards, wallpaper, stickers, medals, and sim card tray pin. This collaboration will enable realme to reach out to realme and Marvel fans who believe in a power beyond the average speed, unprecedented performance, and leap-forward technology.

Over the course of the year, realme has increased its footprint in global markets and collaborated with film production firms and artists. Collaboration with renowned Japanese designer Naoto Fukusawa for realme GT Master Edition and association with blockbuster film Spider-Man: Far from Home for realme X, Dragon Ball Z for realme GT NEO 2 and Naruto for realme GT NEO 3 empowered realme GenZ users globally and enhanced their experience. Taking the legacy ahead, this new collaboration will deliver not only a true premium smartphone experience but also strengthen our commitment towards continuously fulfilling our young users’ demand worldwide.