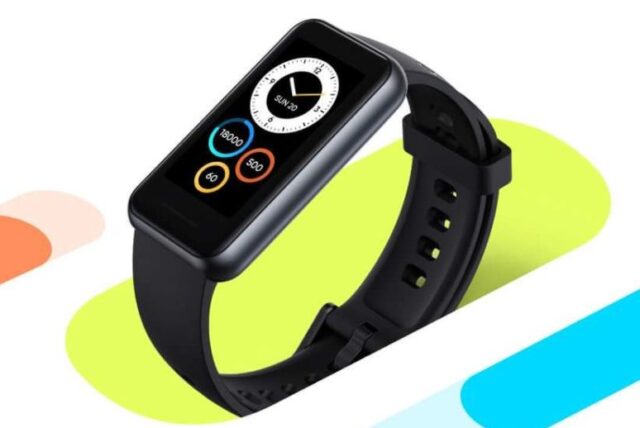 Realme introduced its new Band 2 wearable at an event conducted recently. The new Realme Band 2 comes across as the successor to the Realme Band that was first introduced in March 2020. The new Band 2 comes with a better and bigger display comprising of a 1.4-inch color touch enabled panel while the wearable also boats of enhanced feature set. That includes a blood oxygen monitor and a heart rate monitor while there also are 90 sports modes that the wearable comes integrated with.

The 1.4-inch touchscreen display of the Realme Band 2 comes with a resolution of 167 x 320 pixels and has a peak brightness of 500 nits. Other salient features of the Band 2 display include a trio of LED drivers as well as a photodiode. There is an analog front end too as well as a GH3011 sensor on board.

Sports modes that the Band 2 supports include running, cycling, strengthening training, swimming and such. The smart band will be able to keep a tab on the total exercise time done every day and week. There also is the feature to record the next calories burned as well so that users will have an idea of the progress they are making on a daily or weekly basis.

Another cool feature of the Band 2 is its ability to remain operational for up to 12 days on a single charge. For that, it comes equipped with a 204 mAh battery. Other cool features of the wearable include 5 ATM water resistance as well as the over 50 dial faces it supports. What’s more, the Band 2 can also be used to control other smart gadgets in your home via the Realme Link app

The Chinese company has priced the Band 2 extremely competitively at Rs. 2,999. It is all set to go on sale in India from September 27, 12:00 PM onwards. It can be ordered via Flipkart and Realme.com, besides other online and offline retail stores across the country.