Home News Realme announces the launch of its budget C3 phone on Feb 6... 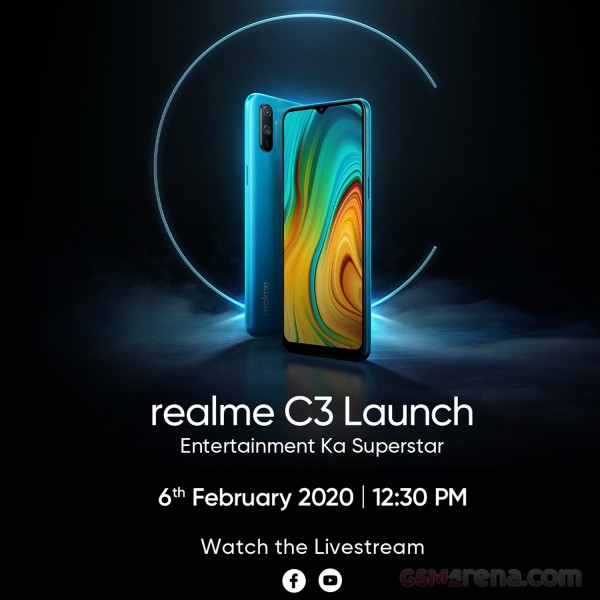 Realme has announced its C3 smartphone is set for a launch in India on February 6. The company is in fact sending out invites for the launch event which is set to begin on 12:30 pm. The event will be streamed live on Facebook as well as YouTube. The company had launched the C2 in India on May 2019.

Unfortunately, much of the new C3 has been kept under wraps, which means there is almost nothing that we know of the phone as yet. The company though is using the tagline ‘Entertainment Ka Superstar’ in its promotions, which translates to the device being just perfect for entertainment.

If that be the case, expect the C3 to come with a battery big enough to support entertainment for really long. As it is, the C2 came with a 4000 mAh battery and it is likely that could be upgraded to 5000 mAh this time.

Meanwhile, the company has also included an image of the upcoming phone in the official invitations. That reveals a nice looking phone having a tear drop notch at the top for housing the selfie camera. The display looks stunning given the manner it stretches all the way to the edges though the rather thick chin at the bottom can’t be ignored.

While still on the display, some have claimed it might be of 1080 pixels; more so given that the Chinese company is keen to position the device as one best suited for entertainment. However, that again is being doubted by many considering that the Realme C series of phone have largely been entry level devices and it’s quite unlikely they would be offering a 1080p display in such a segment. Th C2 features a 6.1-inch 720p display.

The rear end reveals a dual camera module arranged in a vertical capsule along the top left corner. The rear is also expected to come with a fingerprint sensor though the same is missing on the C2. Lastly, the phone’s availability in a shade of blue also seems confirmed given that that’s the shade the phone is seen in the invitations.

Expect all details to be revealed on Fenruary 6.