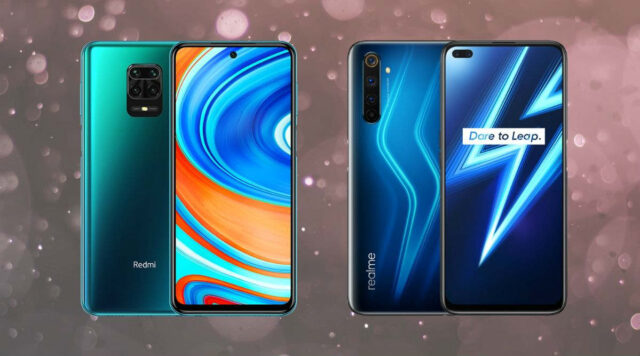 There is a battle royale being fought out in the Indian mid-range smartphone segment, with the Realme 6 Pro and the Redmi Note 9 Pro being the contenders. Both have been launched in the country at roughly the same time, March 2020, and both are vying for the same segment, which again happens to be the one that drives the maximum volumes in the country.

Needless to say, both the phone come packed with all the latest specs along with convenient features. So, if you are torn between which to opt for, here is a comparison between the two which should help you find out which can be your next buy. Read on!

Both the phones have a similar build, which includes a glass front and rear with a plastic frame holding both together. Realme 6 is again claimed to be splash resistant while the Note 9 comes across with a splash proof design. That should allow for some protection again water ingress but cannot be trusted with water proofing ability. There is no IP rating as such too.

It is again a similar scenario with both the phones. The Realme 6 Pro comes with a 6.6-inch IPS LCD 1080 x 2400p display. That makes for a pixel density of 399 ppi having 480 nits of brightness along with 90Hz refresh rate.

The Note 9 Pro is larger, albeit by a thin margin. It comes with a 6.67-inch IPS LCD display with everything else remaining the same. That includes 1080 x 2400 pixels resolution  along with 450 nits of brightness while pixel density is also almost the same at 395 ppi.

Both the phones have a layer of Gorilla Glass 5 on top for added protection.

Both the phones come powered by the 8nm octa-core Qualcomm SM7125 Snapdragon 720G processor along with Adreno 618 for graphics processing. Similarities apply to the memory and storage versions of each phones, both being available in 64 GB + 6 GB RAM, 128 GB + 6 GB RAM, 128 GB + 8 GB RAM models. And should you need more storage, there is a dedicated microSDXC slot as well for further expansion.

Both the phones run the latest Android 10.0 with the respective company’s UI running on top. That happens to be the Realme UI for the Realme 6 Pro and MIUI 11 for the Note 10 Pro.

Both the phones have elaborate camera setup at the rear comprising of four lenses. For the Realme Pro 6, that includes a 64 mp  f/1.8 primary camera, a 12 MP, f/2.5 telephoto lens having 2x optical zoom, 8 MP, f/2.3 ultra-wide lens along with a 2 MP, f/2.4 macro lens. You have the ability to shoot both 4K and HD videos while the 64 mp and 12 mp lenses benefit from PDAF as well. You also have LED flash, HDR, panorama features too.

The Realme 6 Pro has a dual camera setup for selfie shots, comprising of a 16 MP, f/2.1 and 8 MP, f/2.2 wide and ultra-wide angle sensors respectively. Then there are HDR and Panorama features too while you have the ability to shoot full HD videos.

The Note 9 Pro has a slightly different take for selfie shots and features a single 32 mp wide angle lens. Other aspects remain the same, which includes HDR and Panorama along with the ability to shoot full-HD videos.

For the Realme 6 Pro, it is a Li-Po 4300 mAh battery backed by 30W VOOC 4.0 fast charging technology. The company is claiming full charge gained in 57 mins.

On the other hand, it’s a Li-Po 5020 mAh battery that keeps the lights on, and comes with a 33W fast charging tech. This, the company claims will ensure 50 percent charge gained in just half an hour of being plugged in.

Its Lightning Blue, Lightning Orange for the Realme 6 Pro and Aurora Blue, Glacier White, Interstellar Black for the Note 10 Pro.

Both the phones come with side mounted fingerprint sensor along with the usual set of sensors. Those include accelerometer, compass, gyro and proximity. Another interesting feature with both the phones is that they come with NavIC which happens to be India’s own navigation system.

Other common feature set for both the Realme 6 Pro and the Note 9 Pro include 3.5mm slot, USB2.0 port, Bluetooth 5.1 and so on. Both the phones have FM too with Note 9 Pro allowing for recording as well. The Note 9 Pro comes with InfraRed feature too which is lacking on he Realme 6.

As you should have already got it by now, both the Realme 6 Pro and Note 9 Pro comes across as twins of sorts. They have remarkable similarities with their internal setup as and can do things fairly similarly. This boils down to what can be considered the final frontier where the phones collide – price. And it is here that things take quite a drastic change.

For the Note 9 Pro is available for a whole 3k less than the Realme 6 Pro. And in a price conscious market like ours, that can make a huge difference. In the end, what can be said is that the respective manufacturers have made it easier for the consumers to decide which one to go for.