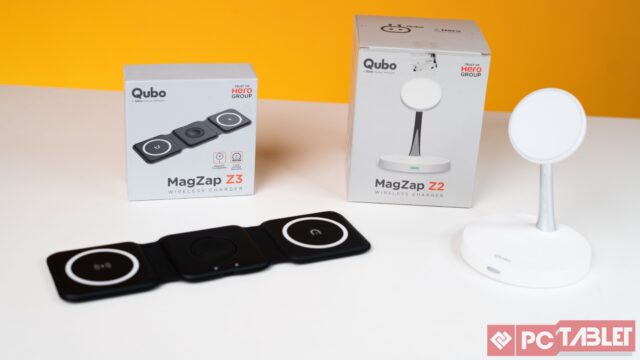 We have seen how Qubo has developed as a brand over the past years. They are a member of the well-known Hero group of businesses and are diversifying into a few intriguing product categories. We’ve already reviewed a few of their devices, which range from smart cameras to smart audio sunglasses.  The company has now brought in two new luxury products aimed at iPhone users. The Qubo MagZap Z3 wireless charger and the Qubo MagZap Z2 wireless charging dock are these. We have been using all the above-mentioned wireless charging solutions for a little over two weeks now, and should you buy one for yourself? Let’s find out in our review.

A creative interpretation of what a flexible Apple charging mat might have looked like is the Qubo MagZap Z3. Three separate charging coils, each devoted to a different Apple product, are present on the wireless charger. The mat is composed of plastic that has been reinforced with rubber, which helps the unit fold and makes it simple to carry in a backup. Regarding appearance, the charger is available in just one shade, Black, and has distinct branding for each supported device on the charging coils.

The Qubo MagZap Z2 is a standard, everyday 2-in-1 wireless charging dock that has recently gained popularity thanks to MagSafe. The charging station, which is composed of plastic, allows you to simultaneously charge two devices. The charging stand comes in a single White color option with a base that has a slot for an Apple Watch or the AirPods, while the phone is lifted on a stand.

The tilt adjustment on the stand is buttery smooth and exudes quality. The phones are magnetized to the stand because it is MagSafe compliant. This indicates that iPhones 12 and later can use the stand. The unit gets its power through a USB Type C port which is placed on the base with a neat green gasket around it, which is a nice design touch.

On the base, we get an area to charge AirPods and other Qi-compatible TWS earbuds with a max output of 5W. We tested the base using an old Fossil smartwatch, and it worked flawlessly. Therefore, in theory, if a WearOS watch supports wireless charging, you may charge it at 5W as well, although the primary coil for iPhones has a maximum output rate of 15W.