Qualcomm finally unveiled the Snapdragon 450 chipset which is the new addition to the Snapdragon 400 series. Though this is a mid-range chipset, Qualcomm claims that it comes with a significant gain in processing speed and power efficiency.

Nonetheless, the previous generation Snapdragon 435 is fastest in 400 series and a popular choice for mid-range devices these days. The new Snapdragon 450 chipset aims to replace the 435 SoC with significantly faster and power efficiency compared to its predecessor. It actually is the first chipset in the 400-series to use 14nm FinFET process and designed to deliver significant improvements in battery life, graphics and compute performance. 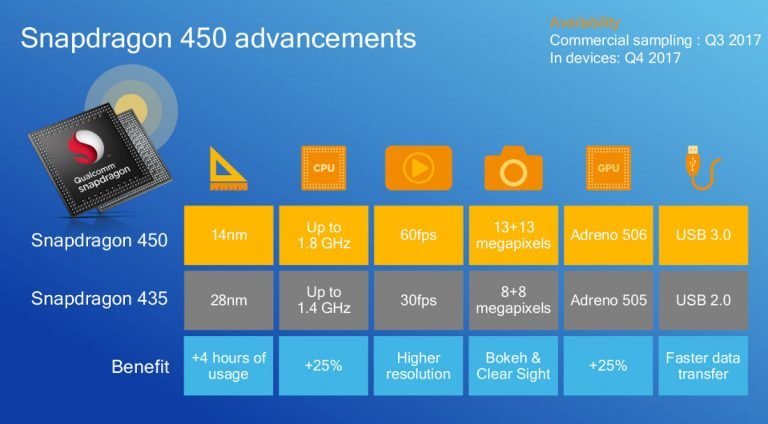 To sum up, Qualcomm seems to have come up with a perfect mid-range chipset with remarkable improvements over its predecessor. The Snapdragon 450 will be available for sampling to OEMs in Q3 2017 and is expected to arrive on consumer devices in Q4 2017.

Nitin started PC-Tablet because of his keen interest in space research, technology, and gadgets. He is an avid reader, technology enthusiast, and like to explore new places. His passion for knowledge keeps him running all the time.
Website: https://pc-tablet.com
Posts created: 3419