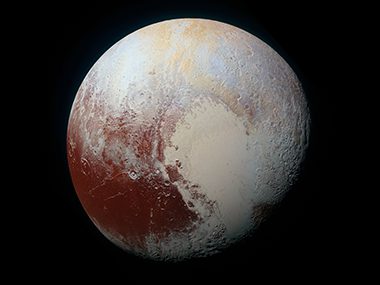 For many years, Pluto was considered as a tiny planet and was discussed only when the Solar system was studied. Many years later, Pluto got dethroned from planetary status and joined as one of the dwarf planets with many Kuiper Belt objects. Although it was officially announced as to not consider Pluto as a planet, still we depict it as the ninth planet of our solar system, and the mystery about Pluto continues. Also, its mass was once questioned in 2006.

The observations sent by Hubble were not so clear and it was in 2015 that New Horizons revealed many high-resolution images of Pluto‘s surface. And through the detailed images of New Horizons, it became clear that Pluto has much more on its surface than what it was thought previously. Pluto was no longer looking like a faceless dwarf and New Horizons also signified that it also possessed a heart.

Now after two years, The Working Group for Planetary System Nomenclature (WGSPN) has officially announced and named some of the most important surface features of Pluto.
The International Astronomical Union (IAU) revealed that some names were proposed by public members and the rest were ‘informally used’ by the science team of New Horizon.
Rita Schulz, chairman of IAU’s WGSPN said through a press release that they are completely excited about approving names of significant people who contributed immensely towards Pluto and the pursuit of exploration along with mythology of underworld.

The prominent surfaces of Pluto were named after those scientists and researchers who mattered the most when Pluto, as well as other space exploration, was taken into consideration.loombaugh Regio honors Clyde Tombaugh (1906–1997), the US astronomer who discovered Pluto in 1930 from Lowell Observatory in Arizona.

Burney crater is named after Venetia Burney (1918-2009), the person who suggested the name ‘Pluto’ for Clyde Tombaugh’s new planet, at the age of 11 years.

Sputnik Plantia, a big plain present on Pluto, is named after Sputnik 1, the first ever space satellite launched by the Soviet Union in the year 1957. Tenzing Montes and Hillary Montes are Pluto’s mountain ranges named in honor of Tenzing Norgay (1914-1986) the Indian/Nepali Sherpa and Edmund Hillary (1919-2008) the New Zealand mountaineer, who were the first persons to reach the top of Mount Everest and return safely.

Al-Idrisi Montes, Djanggawul Fossae, Sleipnir Fossae, Virgil Fossae, Adlivun Cavus, Voyager Terra, Tartarus Dorsa and Elliot Crater are some of the important and major surfaces of Pluto named after many eminent people of our planet.