These new tablets will be used for mobile computing services including taking orders, shelf stocking, keeping the logistical records, etc. Instead of general consumers, these devices are targetted at people who require the functionality of a mobile phone in a rugged form factor to do their jobs remotely.

Launched globally back in June 2018, the Panasonic Toughbook FZ-T1 is a slim and rugged phone or a Toughbook that can be used comfortably for calling, thanks to its relatively compact form factor.

The Toughbook comes with a 5.00-inch HD touchscreen display with a resolution of 720 pixels by 1280 pixels. The screen further touts 10-point multitouch support along with rain sensing, glove touch mode and can also be operated with a stylus pen.

Under the hood, it’s powered by 1.1Ghz Quad-core SoC coupled with 2GB of RAM and 16GB of internal storage that can be expanded as well.

The Panasonic Toughbook FZ-T1 also gets an 8-megapixel single camera at the back for doing essential tasks.

Furthermore, the device is capable of handling 5-feet drops due to MIL-STD810G standards while the IP68 rating protects against dust and water. Additional features include a mic with noise suppression technology and a loudspeaker for better feasibility in busy environments.

The Panasonic Toughbook FZ-T1, on the other hand, was unveiled first in July 2018. It sports a larger 7.0-inch display with HD resolution of 1280×720 pixels. Just like its sibling, it too supports 10-point capacitive multi-touch with rain sensing, glove mode apart from the optional passive stylus control.

Powering the Toughbook is a quad-core Qualcomm Snapdragon processor paired with 2GB of RAM and 16GB of onboard storage. 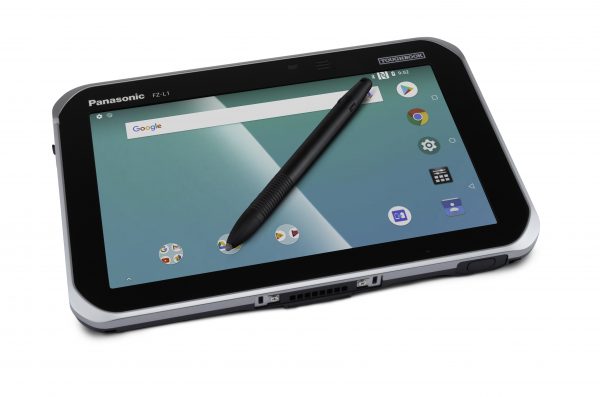 The FZ-L1 too is built on MIL-STD810G standards to withstand 5-feet drops but is rated for IP67 certification instead. The in-built 3,200mAh battery is claimed to deliver up to 9 hours of usage, compared to the 12 hours of backup on the FZ-T1.

Both the rugged phones run on Android 8.1 Oreo platform and bear an integrated barcode scanner which is capable of scanning barcodes on the go. Connectivity options include Wi-Fi, GPS, Bluetooth, and NFC, and the device weighs 421 grams.

As far as the pricing is concerned, both the devices start at Rs. 60,000 (before taxes) in India. Prices may go up accordingly for added customizations and features.