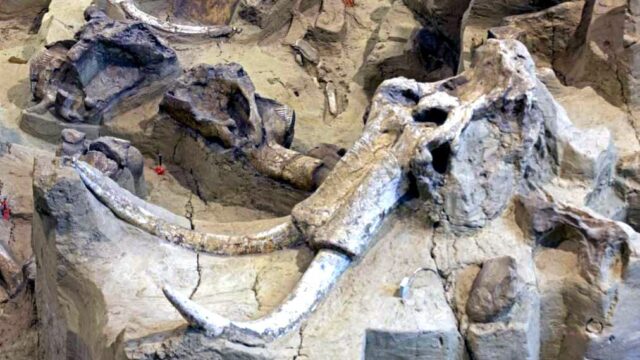 Pakistani University scholars last week found a 1.1 million-year-old skull of a stegodon female elephant at a location in Gujrat district of Punjab province. The skull from Panjan Sher Shahana, Pabbi Hill was 38 centimeters long, 28 centimeters wide, with 120 kilograms of weight.

According to Dr. Muhammad Akhtar, the Punjab University Zoology Department Head, the measurements were evidence enough that this elephant must have been twice as big as the elephants found today.

Akhtar further stated that during laboratory tests, it was established that the skull had a proper fitting of species of elephants found in Asia, Africa, and Europe. PU Zoology Department Ph.D. Scholar, Syed Ghayoor Abbas, had spent the past one and half year excavating in the area.

However, it took him two days to unearth and reserve the whole skull without damaging. The right tusk was intact, but the left tusk was partially broken.

Besides the skull, Abbas said that he located fossils of many other animals and species in the same area. Fossils of deer, pigs and rhinos were found during the excavation work and according to Akhtar, more research would be carried out to create a better understanding of elephant species of that era.

Also, with the genetic, hereditary and evolution of animals, the scientists would equally attain a better understanding of the concepts. On the other hand, Abbas said that the findings would help him complete his Ph.D. thesis.

Apparently, the discovery site of the skull was known as ‘sawalik’, which is an international title for sites and could perhaps attract so much attention from local and foreign tourists.

As such and for the interest of the local and foreign research scholars, the skull would be taken to Punjab University’s Jhelum Campus. It would probably be put at a museum in Lahore but a later stage according to university spokesman Khurram Shahzad.

More excavations within the same area are expected to take place in December.

Pride Month: 4 Tips To Avoid Becoming a Victim of a Romance Scam By Sophos

Discord TKL Mechanical Keyboard is geared up to give a marvelous...