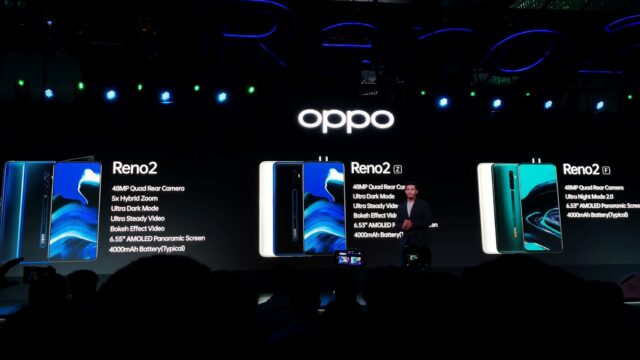 As scheduled, the Chinese smartphone maker Oppo has now finally unveiled three new smartphones under the Reno-lineup in India. This includes the all-new Oppo Reno 2, Reno 2Z and Reno 2F smartphones, all of which come with quad-rear cameras, pop-up front cameras, in-display fingerprint scanner and VOOC 3.0 fast charging. Let’s talk about their specs and features in detail.

Being the most expensive of all, the Oppo Reno 2 features a shark-fin style Pop-up camera compared to the conventional ones on the other two. Notably, the device gets a 6.55-inch full-HD+ (1,080 x 2,400 pixels) Dynamic AMOLED display with a screen-to-body ratio of 93.1 percent and 20:9 aspect ratio. The front is protected by Gorilla Glass 6 while the rear is protected by a layer of Gorilla Glass 5.

Under the hood, the device gets powered by Qualcomm Snapdragon 730G SoC, coupled with 8GB of LPDDR4X RAM and 256GB of UFS 2.1 inbuilt storage. Oppo has also provided built-in features like Hyper Boost 2.0, Frame Boost, and Touch Boost to deliver a smooth user experience by optimizing system resources.

For photography, the phone gets a total of four cameras at the rear. This includes a 48-megapixel Sony IMX586 sensor followed by a 13-megapixel telephoto lens. The same allows support for 2x optical, 5x hybrid, and 20x digital zoom.

On the software front, the phone runs ColorOS 6.1 on top of Android 9 Pie. All of this is backed by a massive 4,000mAh battery that supports VOOC Flash Charge 3.0 technology. As mentioned, the Oppo Reno 2 also gets an in-display fingerprint scanner for Unlock authentication.

The phone is powered by 12nm-based octa-core MediaTek Helio P90 SoC and gets 8GB of LPDDR4X RAM and 128GB of UFS 2.1 inbuilt storage. Akin to the elder sibling, it runs ColorOS 6.1 and bears an optical in-display fingerprint scanner.

In the camera department, the phone gets a 48MP Sony IMX586 sensor with f/1.7 aperture, an 8MP 119° Ultra-Wide sensor, a 2MP Monochrome Lens and a 2MP shooter for depth sensing. For selfies, there’s a 16MP pop-up selfie camera with f/2.0 aperture. Just like Reno 2, it packs a 4,000mAh battery with support for VOOC 3.0 Flash Charge technology.

Evidently, the Oppo Reno 2F shares same specifications as the Reno 2Z, except for a few significant differences. Talking of which, the Reno 2F packs MediaTek Helio P70 SoC, instead of P90 on the former, paired with 8GB of RAM and 128GB of inbuilt storage.

Also, Oppo is using Samsung ISOCELL GM1 sensor as the primary 48MP camera instead of Sony IMX586. Apart from that, everything else, including battery size, charging technology, and the display remains the same. Also, just like the other two phones, the device employs an in-display fingerprint scanner and touts dual Corning Gorilla Glass 5 protection.

The Oppo Reno 2 price in India has been set at Rs. 36,990 for the only model with 8/256GB RAM and storage configuration. And the smartphone will be available for pre-order from September 10th via Amazon.in, Flipkart and other online and offline retailers, with sales starting 20th September.

The Reno 2Z, on the other hand, is priced at Rs. 29,990 and will be available for pre-order starting from today on Amazon, Flipkart, and offline stores. Open sales will begin from September 6. That being said, the Reno 2F price will be announced at a later date in November.

Talking of the launch offers, customers can enjoy zero down payment for EMI options on Bajaj Finserv, and 5% cashback on EMI transactions via HDFC Bank debit or credit card. Plus, Jio customers can avail double data benefits on the Oppo Reno 2 with the Rs. 198 and Rs. 299 prepaid recharge plans. Additionally, Amazon and Flipkart will be offering no-cost EMI options, an extra discount of INR 3000 on exchange. There’ll also be a 10% instant discount for HDFC debit card or credit cardholders.