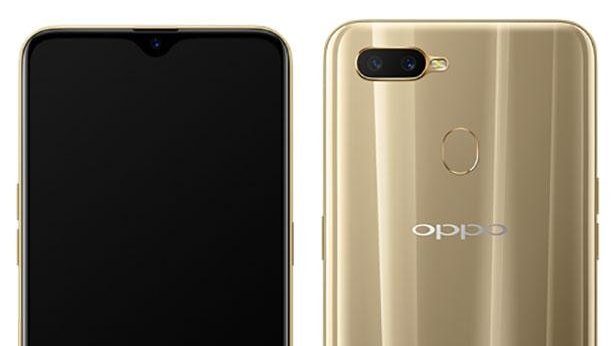 A new smartphone named as OPPO A7 has appeared online on China Telecom website along with its renders and full specifications, followed by the launch date.

The OPPO A7 has been in the stream of leaks for quite a while and the new reports coming via Slashleaks reveal almost everything about the device. To recall, the company recently launched the OPPO A7X in the Chinese market with Helio P60 SoC in early September while we had the rumors of a non-X version coming soon.

As per the China Telecom Listing, the Oppo A7 comes with a glossy glass back (gold variant here) which houses a horizontally stacked pair of dual cameras along with an LED flash, followed by an oval shaped fingerprint scanner. While at the front, we have a full screen display with a water drop notch and a small chin at the bottom.

Under the hood, it will be powered by the Qualcomm Snapdragon 450 SoC clocked at 1.8GHz, coupled with 4GB of RAM and 64GB of onboard storage.

In the optics department, the A7 will come with a dual camera setup on the back featuring a 13MP primary sensor along with a secondary 2MP sensor. At the front, we have a 16MP shooter for Selfies.

On the software front, the handset will run on Color OS 5.2 on top of Android 8.1 Oreo and will draw its juice from a massive 4,230mAh battery.

At a glance, the OPPO A7 might look as Realme 2 to you but in addition to the difference in Notch, it also has different dimensions (155.9×75.4×8.1mm). Otherwise, the specs remain almost same. Moreover, the device is expected to launch in China on November 13th with a price tag of CNY 1599 (roughly Rs. 16,800). Stay tuned.