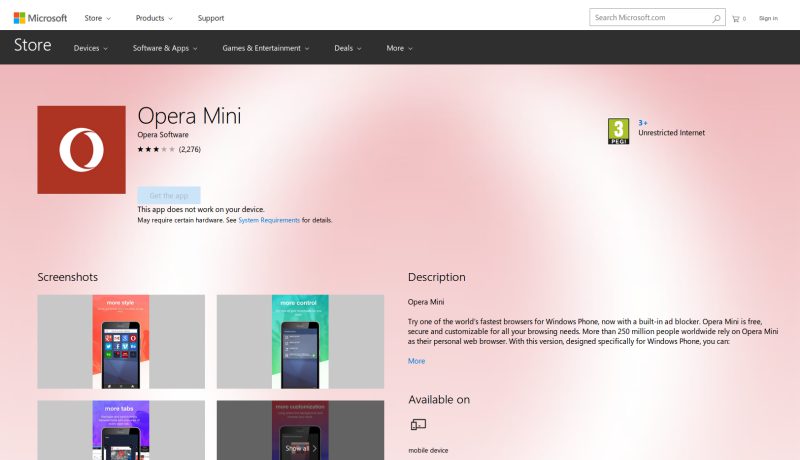 Opera Mini, the phone- and tablet-friendly version of the popular browser Opera, has only been out of beta status since 2015 and already the Windows Store has pulled it from their shelves. It is now entirely unavailable for Windows Phone, and has vanished from the Opera website altogether. This news hardly comes without its share of disappointment for the many loyal users who have enjoyed Mini’s numerous quality features: overall fast performance and Speed Dial start page, built-in ad blocker and battery saver, and Turbo Mode that helps light the fire under the tail of those frustratingly sluggish connections.

But while older versions of Mini are still beloved among millions of users, no one can deny that they are lacking in a few perks — one of the most criticized being their inability to stream videos, especially on social networking sites like Facebook. The new Mini fixes this, however, while retaining many of the features users have grown to expect over the years. The program is still exceedingly tidy and compact (136 MB compared to Chrome’s 406 MB), there are now 90 languages to choose from (whereas before there were only 50), and its page-rendering code is compatible with almost everything on the web.

Mini also lets you make web apps, which take up far less space than native apps, and allow for rapid shortcuts to your favorite websites straight from the home page. This is a feature many reviewers have praised, as it so completely streamlines the process of searching the web. You can look for news, images, videos, anything, without having to so much as open a browser, and the customization tool enables you to fine-tune your input based on your particular interests. In addition, you can sync Opera browsers across multiple devices, so you won’t have to start all over again when you make the switch from mobile to desktop.

When connections start to run on the slower side, the browser’s Turbo Mode compresses data to a staggering degree (sometimes over 80%, depending on the website). This mode does not work with encrypted sites, however, such as those used by financial institutions. But this is probably a good thing, for obvious reasons: You don’t want to cut corners when it comes to protecting your personal bank account. In addition, though the Turbo feature might make the Internet look like it’s being filtered through two cups with a string between them, the data you will save after activating it is enormous.

All of that being said, Opera Mini’s most beloved feature is its built-in VPN tunneling. Every kilobyte of traffic runs through the Opera servers, which ensure the enhanced protection and privacy of an end-user. And this is one of the sad realities of the current situation: Now that Windows has pulled Opera from their store, Windows Phone users will no longer be able to take advantage of having these features naively embedded in their browser, to say nothing of the loss of fast speeds and traffic compression Mini offers. But for those of you for whom privacy is priority one, downloading one of the top VPNs can compensate for some (though not all) of this loss in anonymity.

It is our hope, however, that Opera will one day return as one of the best mobile browsers available. But as for when that might be, only time will tell.