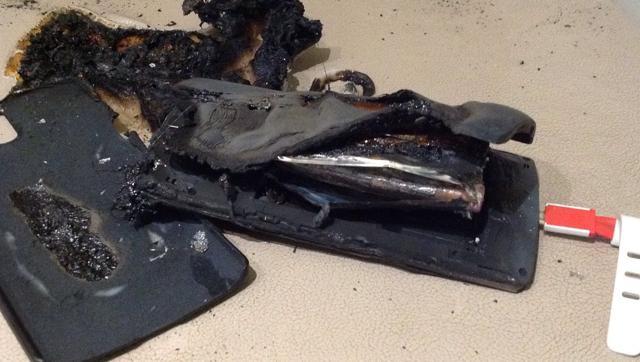 OnePlus One has burst into flames while charging the device. Owned by Chandigarh-based Deepak Gosain, the device has severely damaged and is in such a condition that it cannot be used anymore. The whole unit of OnePlus One has been charred beyond repair. Gosain informed us that he was charging the device for about two hours. Interestingly, he escaped unhurt even though he was sleeping next to it. He told that the phone burst into flames all of a sudden and the battery exploded with loud sound. After the incident, Gosain took to Twitter and shared the real pictures of the charred OnePlus One on Twitter. He also tagged the official Twitter handles of OnePlus, Amazon and the founder Carl Pie along with the pictures.

Gosain also posted a video which he captured after the incident.

Meanwhile, OnePlus has agreed to provide a OnePlus 3 as a free replacement. However, Gosain placed a counter demand which includes a monetary compensation (amount not disclosed) and an iPhone.

The possibility of OnePlus providing him with a free iPhone is very bleak since Apple is touted as an arch rival to Carl Pie-owned OnePlus. Moreover, OnePlus will not like their customers making use of Apple iPhone.

Commenting on the incident, Goasain told reporters that he could have lost his life. However, he still can’t believe as to how he escaped unhurt. He took the charred device to the OnePlus Service center. The officials promised him that the device will be replaced.

Legal route to be adopted if no reply from OnePlus

Gosain told us that he felt let down by the attitude of the company. This is because the officials at the customer care center informed him that the issue will be resolved within a day. However, he is yet to get any concrete response from the company even after four days.

OnePlus will be given one more day. If there is no resolution, he will be compelled to file a petition before the court, said Gosain. However, he feels that taking a legal recourse will take years to resolve the matter.

Even though Gosain got several phone calls from the company, he is disappointed because none of the senior officials contacted him. He told us that OnePlus India seems to be managed by people who can’t take decisions on their own. He confirmed to us that he had asked for monetary compensation in addition to a smartphone from a different brand.

However, sources disclosed to us that the burnt phone had been picked up by the company team. It will be sent to the company’s manufacturing facility for deeper inspection by its engineers.

“Our top priority is the health and safety of our customers. We are confident in the quality of our products, which all undergo industry-leading safety tests. We are already in touch with this customer, but since this is an open case, we cannot disclose any further information,” the company said in response to a query posted by us over the telephone.

This is not the first time OnePlus phones are getting burnt. If you hit Google with the keyword “OnePlus phone burnt”, you will be able to view several similar cases.

Recently, Mi phone exploded into flames when a user attempted to charge the device in his office. The entire episode was caught on camera. In Gosain’s case, there is no live evidence since the incident happened in his own house.