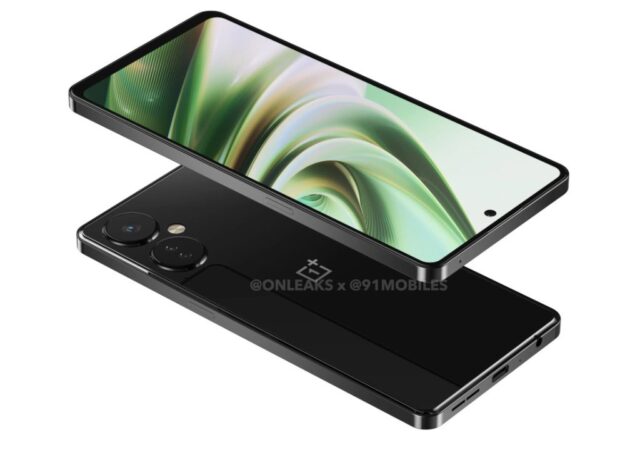 In addition to their flagship models, OnePlus is already designing their budget Nord smartphone series for 2023. The OnePlus Nord CE 3 could be the first smartphone in the line. The phone has been the topic of numerous leaks in the past, and now there is a supposed render of the device out in the wild.

The renders, which are provided courtesy of 91Mobiles, reveal a familiar design. The phone’s rear camera setup resembles that of the upcoming realme 10 Pro series quite a bit. This may be the case, as OnePlus and realme share a parent company. The rear cameras on the phone are now concealed inside two rings rather than a camera bump, as can be seen from the renders. The phone also has flat edges, which is a common characteristic of modern smartphones. The alert slider, which will probably return with the OnePlus 11, is also absent here.

The OnePlus Nord CE 3 is expected to have a 6.7-inch FHD+ LCD panel with a refresh rate of 120Hz. The handset is said to be powered by the Qualcomm Snapdragon 695 SoC, along with up to 12GB RAM and 256GB internal storage. We will see a triple camera setup on the rear that includes a 108MP main sensor, two 2MP depth, and macro sensors, while a 16MP camera will be present on the front for selfies.

Since the Nord 3 CE is said to carry an LCD panel, it will have a side-mounted fingerprint sensor which will be coupled with the power button. The handset will be juiced by a large 5,000mAh battery with support for 67W fast charging. Oddly enough, these specifications mirror the yet-to-be-announced realme 10 Pro series.

The OnePlus Nord CE 3 is expected to be released in the first quarter of 2023. More information about this device should become available in the coming weeks.