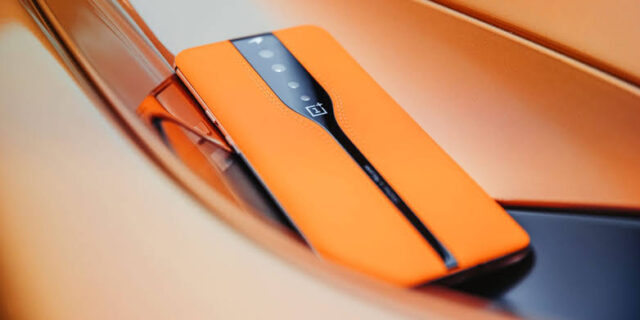 After teasing the device for a while, OnePlus finally unveiled its first concept phone on Tuesday, at CES 2020. Dubbed as OnePlus Concept One, the device has been developed in partnership with the popular car maker McLaren. One of the main highlights of the phone is its disappearing rear cameras that use colour-shifting electrochromic glass technology. This allows the glass to change transparency and thereby to hide the cameras underneath.

For starters, this feature was inspired by McLaren’s 720S Spider sports car that uses similar electrochromic material for its roof, allowing it to switch between tinted and transparent states. And as per the company’s claims, it takes just about 0.7 seconds to shift from solid black to entirely clear, revealing the triple camera module.

As for the design, the OnePlus Concept One gets a leather finish back, coloured in McLaren’s signature Papaya Orange shade. It bears vertically aligned triple camera module in the median, followed by aluminium alloy frame treated with gold finish.

As of now, OnePlus hasn’t revealed much regarding the specifications of the device. And since its a concept phone, there’s no confirmation regarding the company’s plans to bring the device in the market in the coming time.

“This concept phone is a significant experiment in the future form of smartphones. OnePlus started this initiative with the goal of bringing the “burdenless” user experience to the next level. The invisible camera stands as a new form of camera design, one that spares the user from the compromises of current camera layouts. The rear camera lenses are hidden by the dynamic electrochromic glass and only become visible when the camera is in use. This optimal solution is what OnePlus calls “Electronic CMF”—a new approach in industrial design,” said Pete Lau, CEO and Founder of OnePlus while talking about the device.