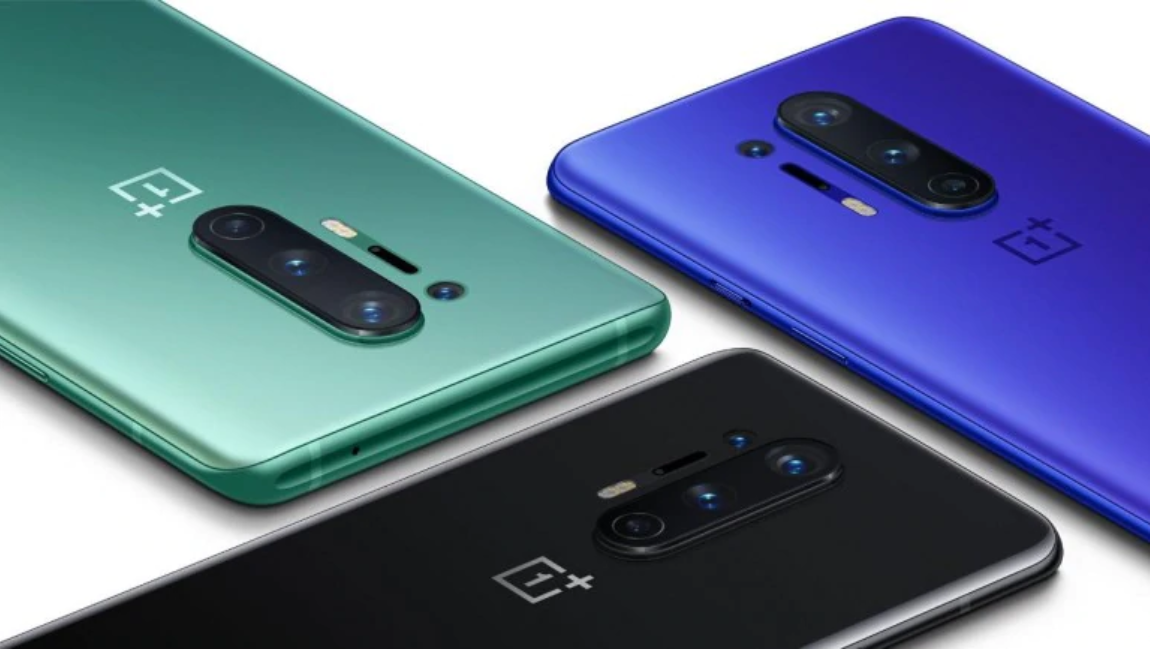 The OnePlus 8 Pro gets a 6.78-inch Quad-HD+ Fluid AMOLED display, with a 120Hz refresh rate and 240Hz touch sampling rate. It has a pixel density of 513ppi, followed by an aspect ratio of 19.8:9. The panel further boasts HDR10+ support and gets a peak brightness of 1300nits. And the company is also flaunting the A+ rating, received from DisplayMate.

Powering the phone at its core is the latest Qualcomm Snapdragon 865 processor. It is coupled with up to 12GB of LPDDR5 RAM and 256GB of UFS 3.0 internal storage. The handset also features the Qualcomm X55 5G Modem for multi-gigabit 5G connectivity alongside Wi-Fi 6 for faster wireless performance.

For photography, the OnePlus 8 Pro gets a total of four cameras at the rear. The setup includes a 48-megapixel Sony IMX689 primary lens with f/1.7 aperture and large 1/1.4″ sensor size, accompanied by another 48-megapixel ultra-wide lens with a 120-degree field of view. Other shooters comprise an 8-megapixel telephoto camera with 3x hybrid and 30x digital zoom and a 5-megapixel colour filter lens.

The camera is equipped with hybrid image stabilisation, combining both OIS and EIS, followed by 3-HDR technology for enhanced dynamic range. Camera features like Audio Zoom, AI Scene Detection, Super Macro and more are present onboard. For selfies, there’s a 16-megapixel selfie camera housed in the punch-hole upfront.

The phone runs Oxygen OS based on Android 10 out-of-the-box. All of it is powered by a 4,510mAh battery that supports Warp 30T charging, claimed to charge 50% within 23 minutes. OnePlus has also offered support for fast 30W wireless charging, using the Warp Charge 30 Wireless dock, sold separately. The same is said to pump 50% power in just 30 minutes.

Like its predecessor, the 8 Pro sports an in-display fingerprint scanner. Other features include IP68 rating, dual stereo speakers with Dolby Atmos and a new haptic vibration engine. The phone weighs 199grams and comes in Onyx Black, Ultramarine Blue, and Glacial Green colour options.

Being cheaper of the duo, the OnePlus 8 gets a smaller 6.55-inch Full-HD+ Fluid AMOLED display with a 90Hz refresh rate. The panel further bears a 20:9 aspect ratio and a pixel density of 402ppi. Like the Pro, it touts HDR10+ support and an A+ rating from DisplayMate.

Under the hood, it’s powered by the same Qualcomm Snapdragon 865 chipset with support for 5G cellular connectivity. RAM and ROM configurations are the same as OnePlus 8 Pro, with the top model clocking 12GB of RAM and 256GB of storage.

In the optics department, the phone gets a triple camera setup at the rear. There’s a 48-megapixel Sony IMX586 primary camera, followed by a 16-megapixel ultra-wide-angle lens. Completing the trio is a 2-megapixel macro camera. For selfies, you get a 16-megapixel front camera.

The phone runs the same version of Oxygen OS baked on top of Android 10. However, it gets a smaller 4,300mAh battery with Warp Charge 30T. Unfortunately, it lacks support for wireless charging. Lastly, the phone weighs 180grams and comes in Onyx Black, Glacial Green, and Interstellar Glow colour options.

The devices are currently up for pre-order in Europe with open sales starting April 21. It’ll also be available in the United States and Canada starting April 29. As of now, the company hasn’t announced the Indian price of the device. Though, it has clarified that the phones will be available in India this summer and will be sold via Amazon and OnePlus’ own website.

Alongside the phones, OnePlus has also unveiled Bullets Wireless Z earphones, claimed to give a 10-hour playback with just 10 minutes of charge. A full charge provides up to 20 hours of battery life. It’ll be sold in Black, Blue, Mint and Oat colour options.