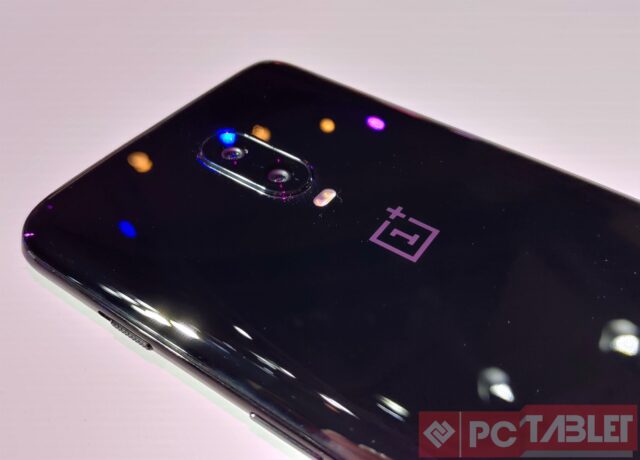 Continuing to their two products per year cycle, OnePlus announced the successor to the popular OnePlus 6, the 6T. Though in the past, OnePlus has delivered the ‘T’ product as an incremental update with updated processors, cameras and so on. This time around the OnePlus 6T hasn’t seen any increments to the processing power since the new Qualcomm processor wasn’t announced at the time, but that hasn’t stopped the brand.

The newer 6T features a set of updated cameras, a minimal kind of notch and the in-display fingerprint sensor. Apart from this the brand has parted ways with the 64GB storage base model and swapped it with double the storage. The removal of the 3.5mm audio jack is one other controversial change that cannot go unnoticed. We have been using the OnePlus 6T for quite a while now, the model we have comes with 8GB RAM and 128GB and has the mirror black finish.

The box design is similar to what we have seen in the past with the other OnePlus products. There is the OnePlus branding on top, along with “6T” written. As soon as you lift the top part, you are greeted with the smartphone. Underneath lie the documentation and the supplied silicon case followed by accessories.

With the OnePlus 6, the brand came out with a new design language which replaced metal with glass in order to blend in more with the flagships. OnePlus 6T has taken all the same design cues and features Gorilla glass on both the front & back and an outer metal rim sandwiched between the glass to add some rigidity. The back is covered in 3D glass with edges tapered in for better grip. The phone is available in three paint jobs, the reflective ‘Mirror Black’, frosted ‘Midnight Black’ and a gradient ‘Thunder Purple’. 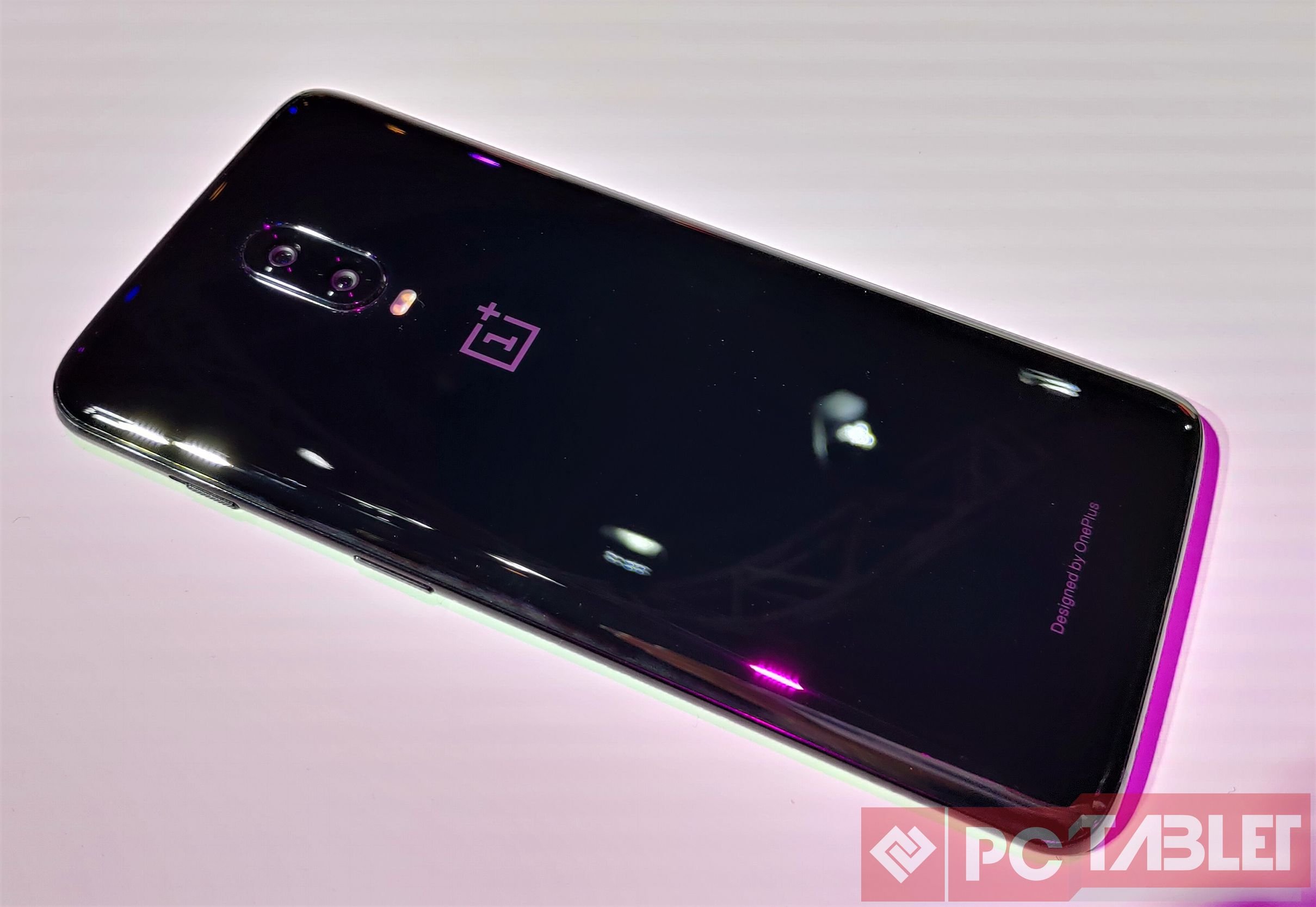 We only got hold of the Mirror Black version, which has a highly reflective finish. The mirror finish looks good but at the same time is a bit slippery and fingerprint magnet. People looking for a more subdued look can always opt for the matte looking ‘Midnight Black’ variant. The rear camera placement is the same as that of the OnePlus 6 but the fingerprint has now been replaced with an in-display one.

The front of the phone features the massive 6.41-inch display with a 19.5:9 aspect ratio and a notch. The bump in the display size is attributed to the curbing down of the bezels and the newer notch. The brand has now gone with a teardrop notch which just houses the front-facing camera while the earpiece is sandwiched between the outer frame and the edge of the display. Sadly, the notification LED has been omitted in this newer iteration. 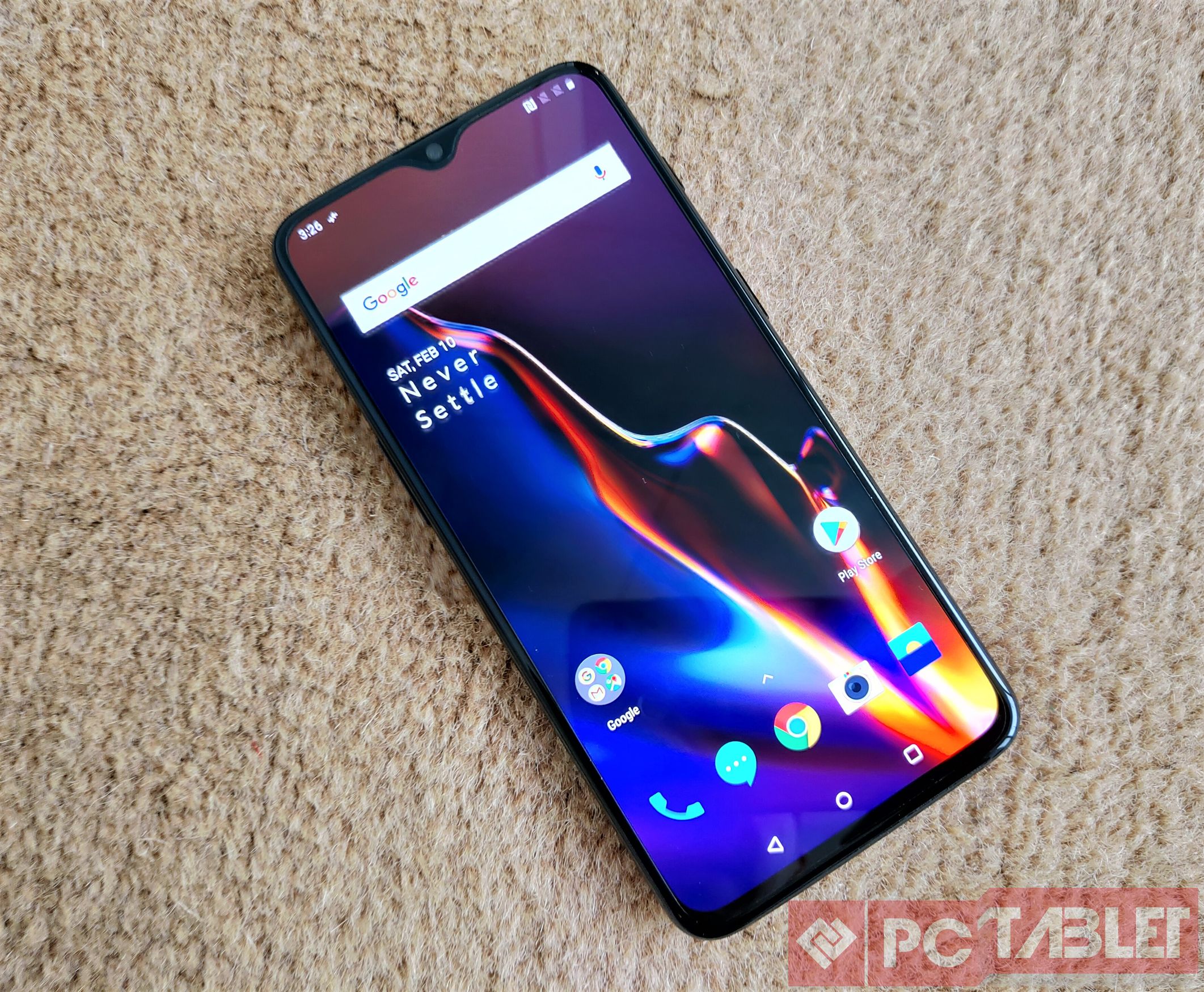 6T is also the first OnePlus phone to feature an in-display fingerprint sensor which is placed on the bottom quarter part of the display for easy access. Coming to the button placement, the volume buttons are placed on the left while the alert slider and power button are on the right side. Another noticeable change is the lack of a 3.5mm audio jack. OnePlus has been very critical in the past of other flagships which ditched the headphone jack in favor of other tech and the brand has chosen that path itself.

To ease up the burden of purchasing a type C earphone, the phone comes with a Type C to 3.5mm audio adapter and at the same time have updated their OnePlus Bullet earphones with a Type-C port. There is still no official IP rating but the brand claims that the phone is splash resistant.

The OnePlus 6T features the biggest display that OnePlus has added to their range of smartphones. OnePlus 6 features a 6.41-inch display in the form factor of OnePlus 6. The notch has seen a revision here and the bezels are now slightly trimmed. The display is now bigger and taller and comes with a 19.5:9 aspect ratio as opposed to the 19:9 aspect ratio on the OnePlus 6. 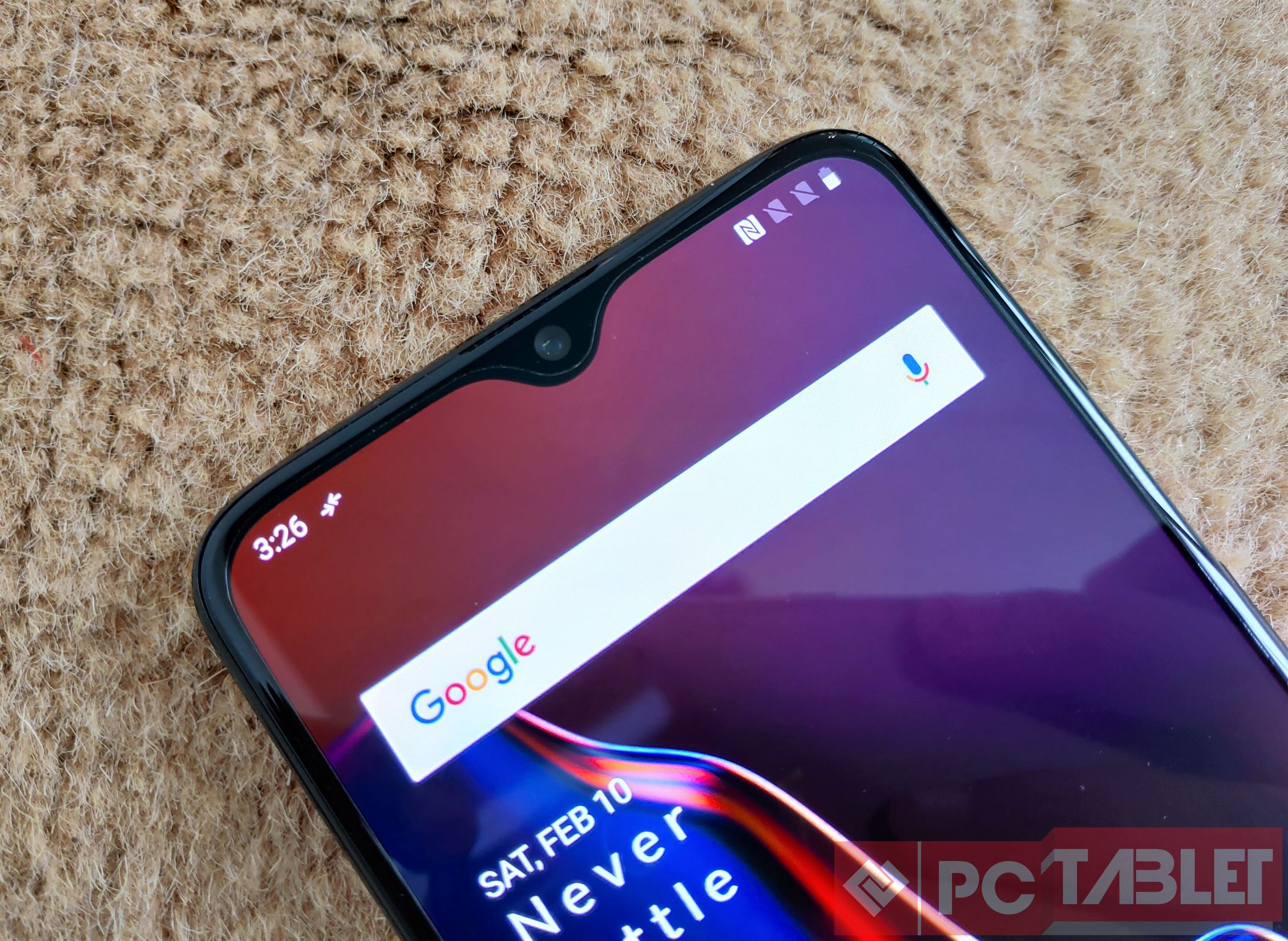 The display is bright with good color reproduction. The blacks are deep, not to the level of the ones found on the Galaxy S9 but is good considering the price of the smartphone. The resolution is still same FHD+ (2340 x 1080) but seems sufficient in day to day use. The display still feels a bit oversaturated and we would recommend users to switch to the DCI-P3 color setting.

OnePlus 6T comes with OnePlus’s custom OxygenOS on top of Android 9 Pie out of the box making the smartphone one of the few in the market currently running on the latest version of Android. OxygenOS only had a handful of pre-installed apps and the slide in shelf, which contains recently-used apps, contacts, and other information, something we have seen implemented in the past by HTC, Xiaomi, and Vivo.

OnePlus has implemented a bunch of shortcuts that can be accessed from the lockscreen itself to make the experience even better like the making < or > sign to change tracks without even waking up the display. The navigation gestures from the OnePlus 6 make a return here as well and are supplemented with Android Pie’s new gesture system that can be activated from the settings if for some reason you don’t like on-screen buttons. 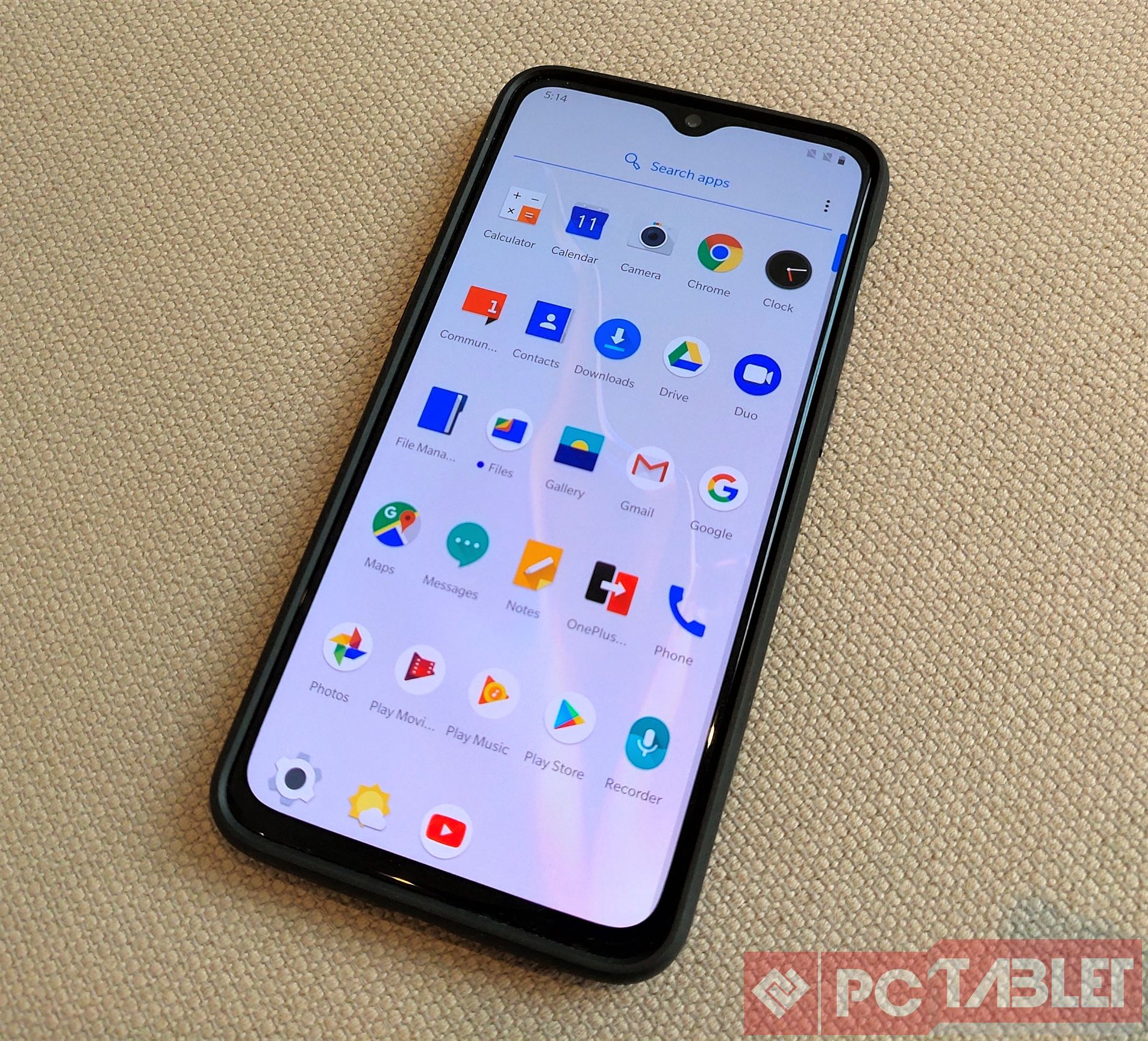 OnePlus’s famed Face Unlock returns here too and feels a little bit faster and optimized. The ‘Gaming mode’ has seen a revision as well now shows emails, calls and other notifications from third-party apps as floating icons. There is a new ‘Smart Boost’ feature which launches the apps 5%-20% faster by storing the data from frequently used apps in RAM but only works on large game files as of now.

On the performance front, the phone is powered by Qualcomm Snapdragon 845 just like the OnePlus 6 and comes with a newer set of RAM and storage combinations. The entry-level variant gets a sizeable 6GB RAM and 128GB storage against the 64GB storage found on the OnePlus 6. OnePlus upped the amount of storage this year, the middle model gets staggering 8GB of RAM and 128GB storage while the top end variant gets the same amount of RAM but with 256GB storage.

In the day-to-day use, the OnePlus 6T feels snappy, with app load and switching times being very less. Now we are not Benchmark fanatics but the scores of the OnePlus 6 are similar to what you would find on the other flagships running on the same chipset. The gaming performance is fluid thanks to the ‘Smart Boost’ and ‘Gaming Mode’. Titles like PUBG and Asphalt 9 ran flawlessly at high graphics settings. 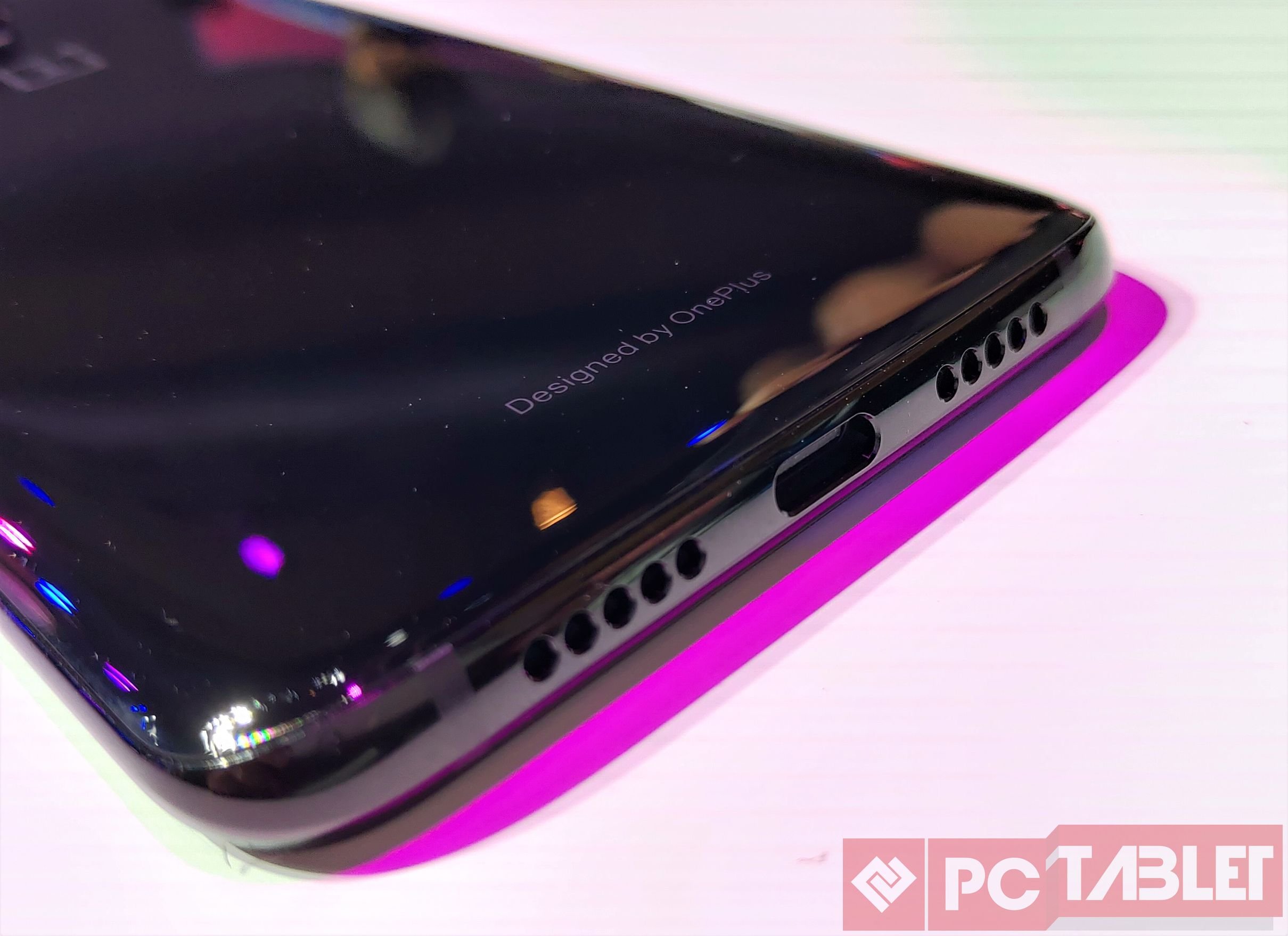 Coming to the audio, the OnePlus 6T has a single downward firing speaker which is on the average side and the omission of the audio jack doesn’t help the cause even further. Also missing is some sort of DAC or HiFi audio chip, output via the 3.5mm jack dongle is also on the average side. Though OnePlus has added a DAC in the newer Type C Bullets you need to shell out extra cash to get them. The only thing good here is the support for AptX and AptX HD, so audio via wireless headphones is slightly better only on the ones that support these codecs.

OnePlus 6T features the same set of optics as that of the OnePlus 6. There are still two sensors on the back, both the 16MP and 20MP sensors have a f/1.7 aperture, but the primary 16-megapixel camera has a larger sensor with larger pixels for better low light performance. OnePlus has added back OIS which was missing on the OnePlus 6 which is supplemented with EIS, but the hardware stabilization is limited to just the main 16-megapixel sensor.

The area where has worked is HDR with which we had complaints on the OnePlus 6. Right of start, we did notice slightly better results in challenging conditions. In good light, the camera focuses quickly, HDR works as expected. For dealing with low light situations, OnePlus introduced the Nightscape mode which is kind of similar to Pixel’s Nightmode. The new mode certainly improves the low light performance in the right situations. It brightens up the objects but struggles if there are light sources in the scene often leading to overblown highlights.

In good light, the 6T’s main sensor performs exceptionally well. The portrait mode works as intended. The 16-megapixel selfie shooter is capable of shooting some decent selfies with a good amount of detail. There are no fancy AI filters here which are slowly creeping out to a bunch of smartphones.

The thing we liked the most is the camera app. Unlike the camera apps from major manufacturers, the UI is uncluttered and simple. Different shooting modes can be accessed just by swiping left or right on the viewfinder. The video performance is decent as well. This time around you can shoot videos in 4K at up to 60 frames per second.

Coming to the battery, OnePlus has supplied the OnePlus 6T with a 3,700mAh battery which is a sizeable increase from the 3,300mAh on the OnePlus 6. The battery stats are still the best in business. During our tests, we managed to get around 6hrs of screen-on-time and on a typical, with moderate usage, there was about 30% left at the end of the day. OnePlus’s Dash Charge is present here as well, so expect some crazy charging speeds. Using the Dash charger, OnePlus 6T takes just under 2 hours to top up the battery.

The OnePlus 6T to us feels like a minor upgrade over the earlier variant but with a few kinks. While there’s much of a boost in the performance but the improved camera and battery performance are welcomed. The OxygenOS has some quirks up its sleeve and is still one of the best custom skins in the market. We are quite impressed with the in-display fingerprint sensors performance. The omission of 3.5mm audio jack is a sore point and the average speakers don’t help either.

That being said, we don’t think the OnePlus 6T is a worthy upgrade for people already using a OnePlus 6 (review) or 5T for that matter but people with the OnePlus 3/3T or OnePlus 5 can blindly get this one.

There are always cheaper options available in the market like the Asus Zenfone 5Z (review), Poco F1 which provide the same set of hardware but has a slightly better feature list and cameras.