Since its debut in the market back in 2014, OnePlus has become synonymous with offering flagship-like handsets at a very competitive price point. The company’s motto is to give consumers a near-flagship quality experience at a price that’s almost literally less than half of what Samsung, Apple, Sony, LG, and Huawei charges.

OnePlus changed its strategy last year with the release not one but two flagship phones – the OnePlus 3 and OnePlus 3T. The saga goes on this year as well with the launch of the newest OnePlus 5T, an upgrade to the original OnePlus 5. Both handsets feature the same hardware, though the 5T incorporates the increasingly popular trend of reduced bezels having an aspect ratio of 18:9. To OnePlus’ credit, they have managed to bump up the OLED screen to 6-inches on its latest flagship, while retaining the same form factor as the OnePlus 5.

I’ve been using the handset for more than four days now, and I still cannot take my hands or eyes off it. The OnePlus 5T feels even more slicker with its new makeover, and is an absolute looker from any angle. It does have a few caveats, but for half the price compared to the likes of the Galaxy S8 and iPhone X, one can’t go nagging about those minor shortcomings. Let’s find out more about the OnePlus 5T in our review.

The device looks way more premium than what its price tag suggests. 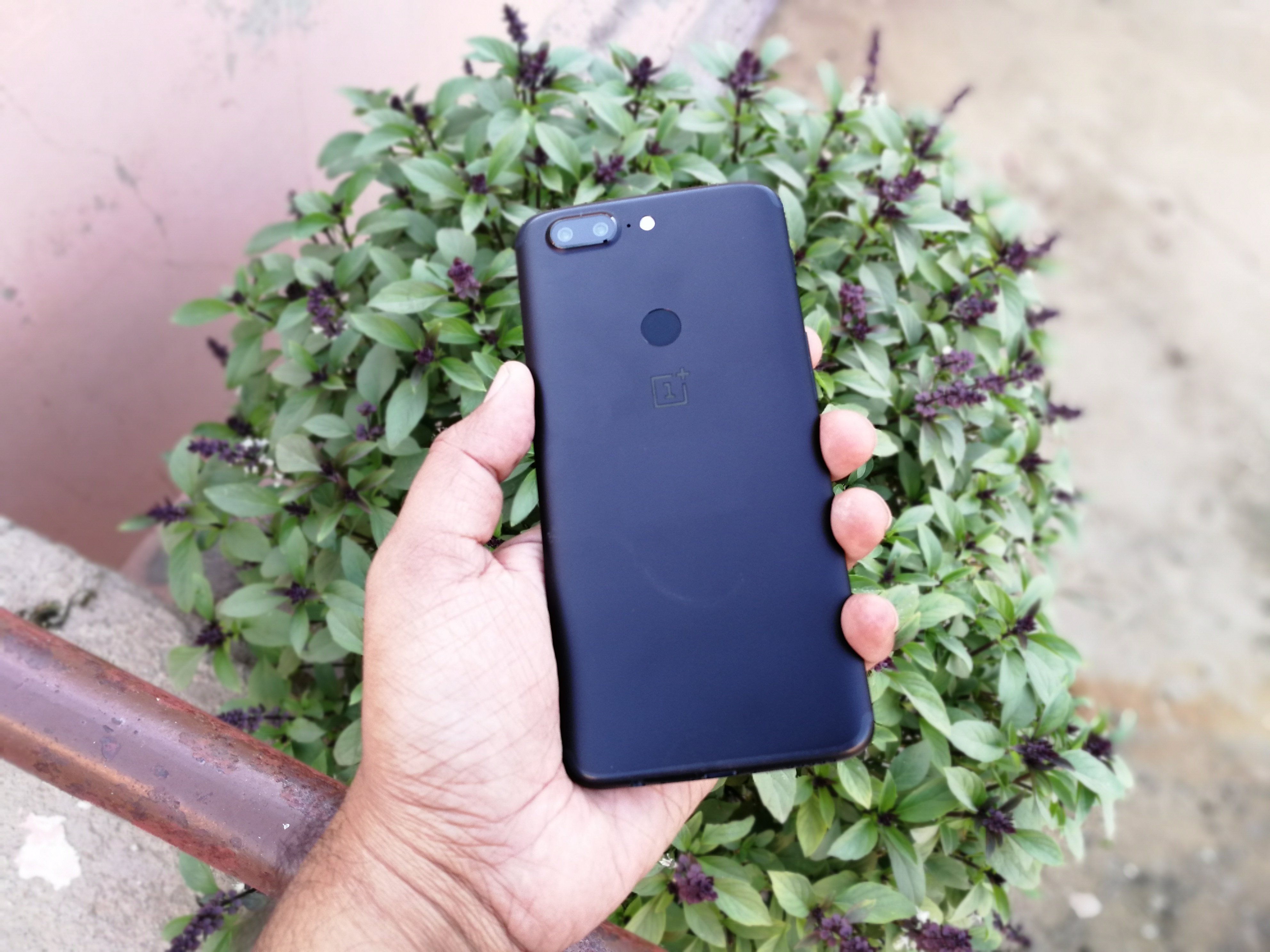 The OnePlus 5 was an outstanding device that ticked all the boxes, barring it’s bland and uninspiring design. However, the OnePlus 5T is an impeccably designed phone. The near border-less screen certainly injects a breath of freshness to the handset’s demeanor, giving it that geeky look and feel. The matte finished back feels smooth and premium with the OnePlus logo emblazoned right in the center, and the elongated display sits ever so slightly above its sleek, aluminum unibody. This is a phone I couldn’t help showing off at every chance I got. The device looks way more premium than what its price tag suggests. 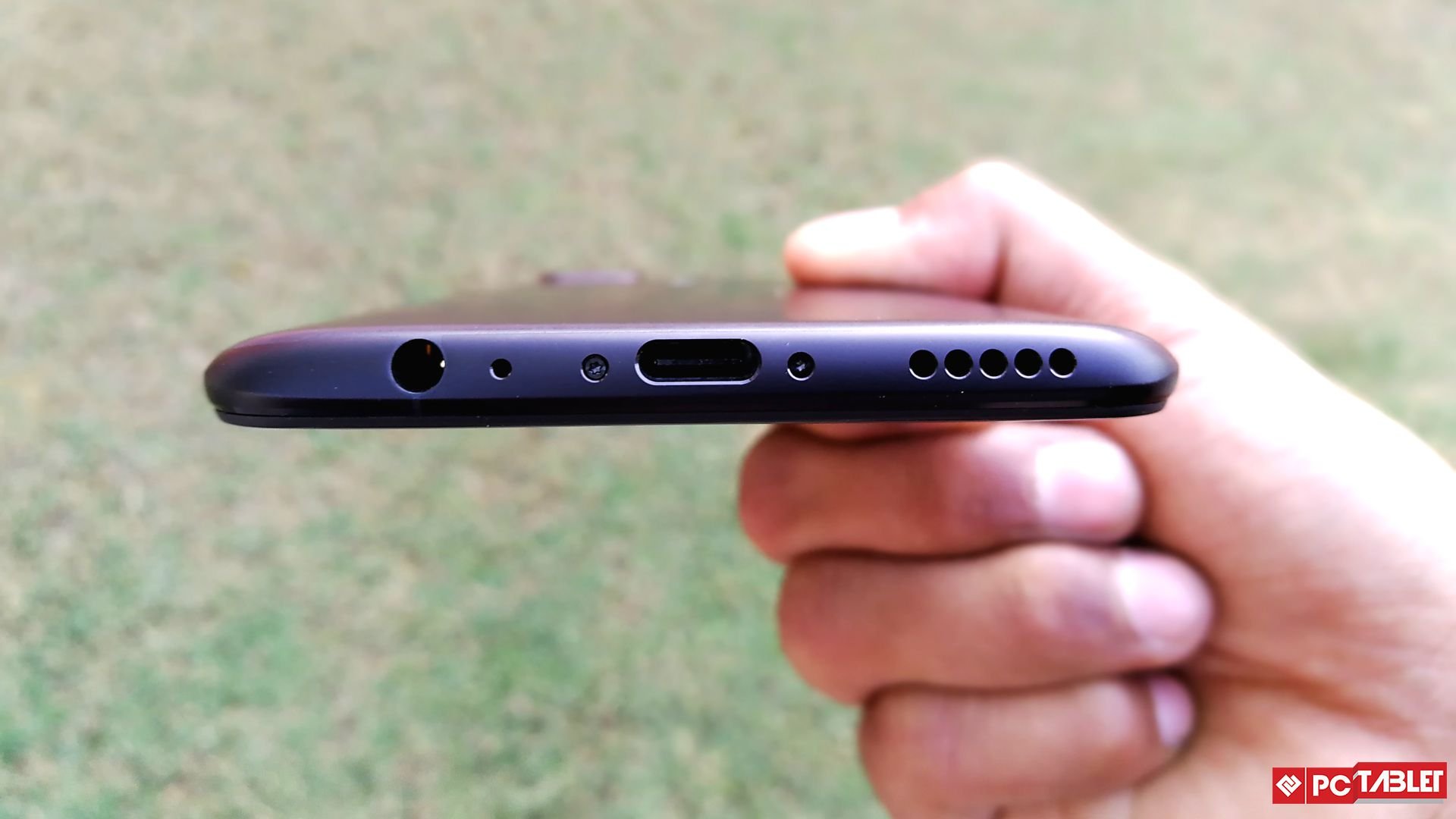 The OnePlus 5T doesn’t feel unusually heavy as well making it great for one-handed usage, which is surprising – given the fact that the handsets weigh a chunky 162gms.  Overall, the OnePlus 5T is an intelligently designed phone that feels good in the hand.

Though, what really baffles me is the camera bump, which protrudes even more – a couple of millimeters more compared to the OnePlus 5. So, one must be excessively wary of the lens gets smudged or scratched over the course of usage. 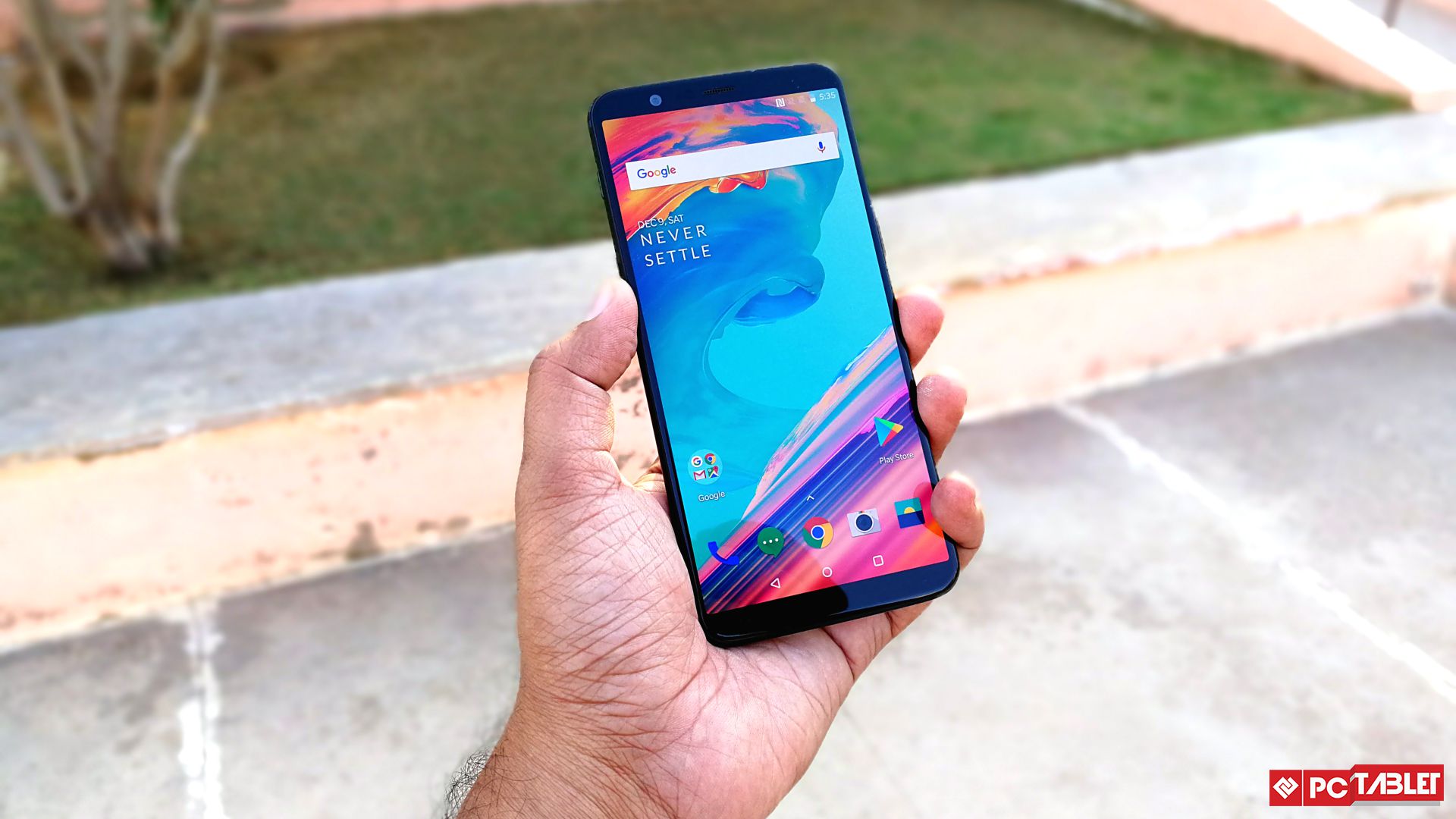 The highlight of the OnePlus 5T is undoubtedly it’s 6-inch Full Optic AMOLED display. Even though it’s limited to just 1080p, the near border-free display offers rather vivid and crisp visuals. Colours are natural as whites appear bright, and the blacks are deep and dark.

The elongated 6-inch AMOLED screen having an 18:9 aspect ratio is glorious, and  I really enjoyed playing games and watching videos on the OnePlus 5T. Colours really pop out when you watch movies or play games like Asphalt and Suicide Squad. Moreover, the phone comes equipped with a sunlight display technology, which offers excellent readability even in direct sunlight. The feature essentially auto-adjusts contrast levels were pending on surrounding lighting conditions, in a very subtle manner. 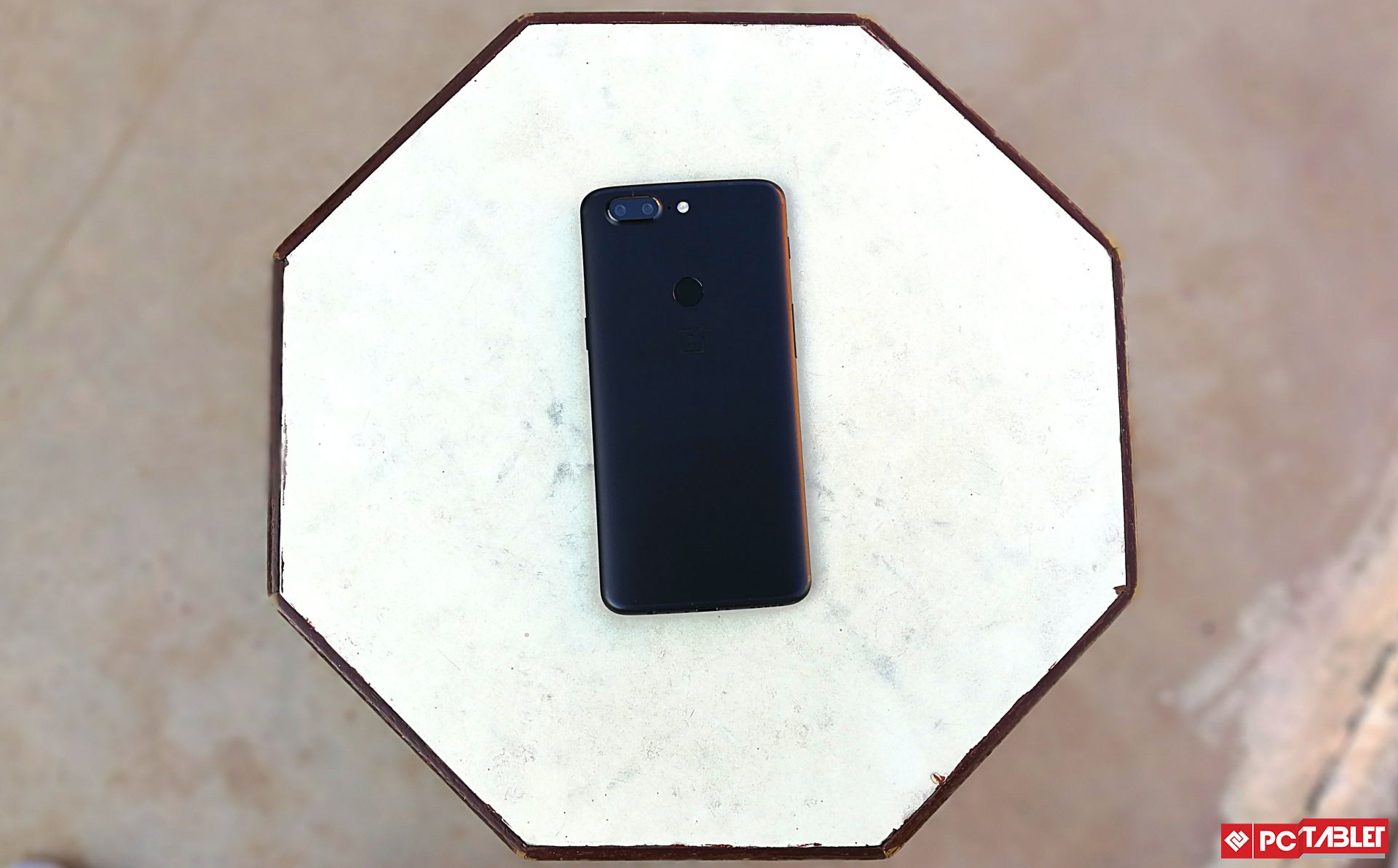 Powering the OnePlus 5T is an octa-core Snapdragon 835 chipset bundled with Adreno 540 graphics and a whopping 8GB of RAM. Now, that means merely that the innards are solidly top-shelf — and it shows. The OnePlus 5T racked an impressive Antutu score of 179393. In Geekbench 4, the phone pulled off single and multicore scores of 1963 and 6703 respectively.

The OnePlus 5T is an absolute beast when it comes to everyday performance. It makes a mockery of anything thrown at it, whether you’re playing graphically intensive games, or jiggling multiple apps at once; the handset doesn’t budge. Everyday tasks such as web-browsing and email are silky smooth, and playing games like Fruit Ninja and Subway Surfer work like a breeze.

Even firing up high-end games like Asphalt, or trying to juggle multiple apps at once couldn’t stutter the OnePlus 5T. It flies whether you’re browsing, multitasking, watching videos, or playing games. 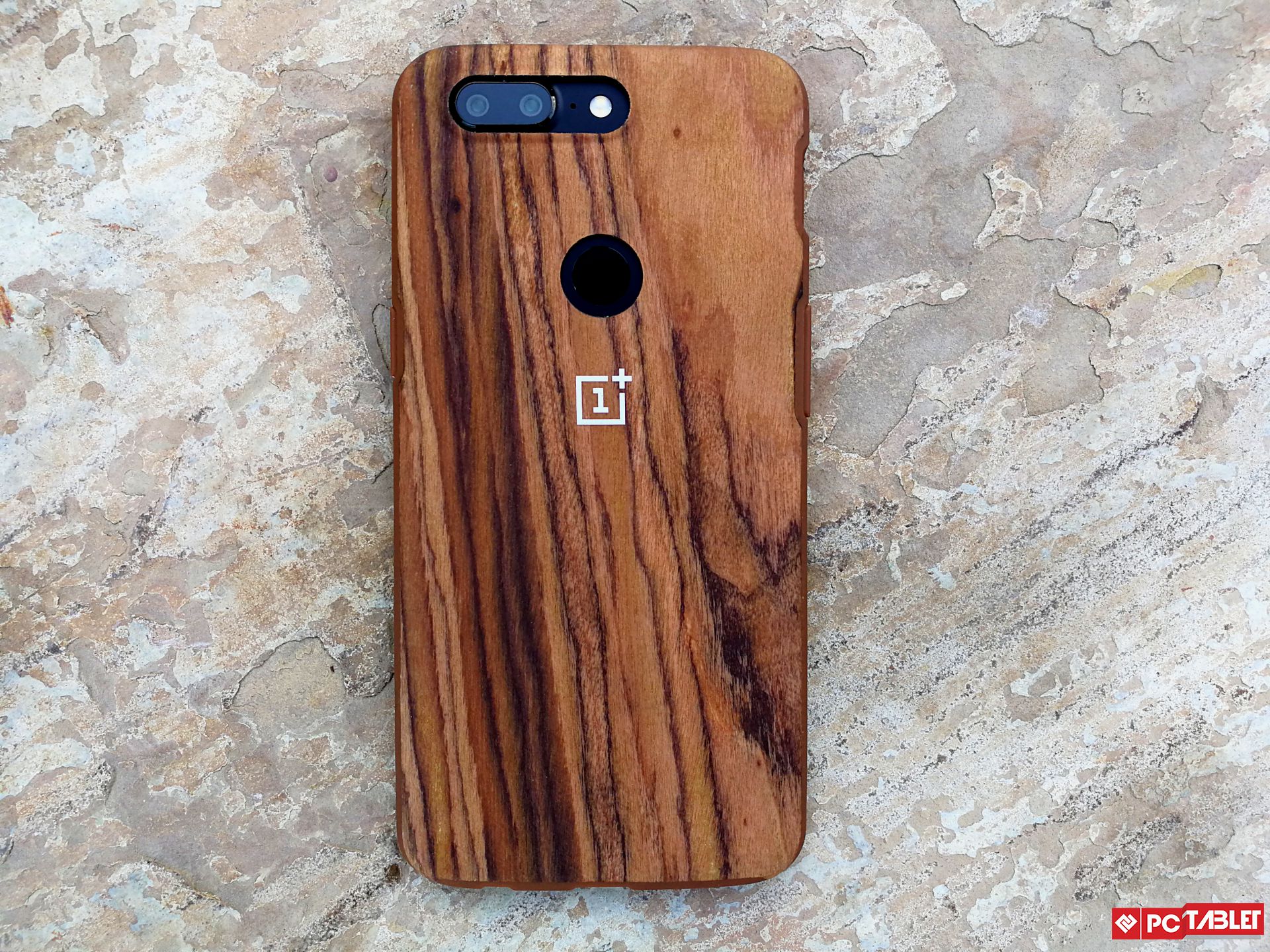 Elsewhere, the handset also gets a facial unlock feature which works rather well and quickly unlocks the device. The fingerprint sensor is also snappy, but its re-positioned at the back of the handset. Though it’s easily accessible and your finger falls entirely on point, but placing the phone on a flat surface gave me problems. However, the handset’s face recognition feature is so fast and accurate that I found myself barely using the fingerprint sensor.

Not to mention, the OnePlus 5T is also an impressive performer when it comes to audio capabilities. Not only does it retain the 3.5 mm jack, but I also loved the audio quality of the phone which packs a punch thanks to Dirac HD sound. OnePlus 5T is also one of the few handsets that support Bluetooth AptX HD. The codec helps deliver higher than CD audio quality. However, you’ll need to own a pair of AptX HD ready pair of headphones to enjoy the feature.

The single speaker at the bottom does belt good volume levels when you’re catching up on YouTube videos or listening. 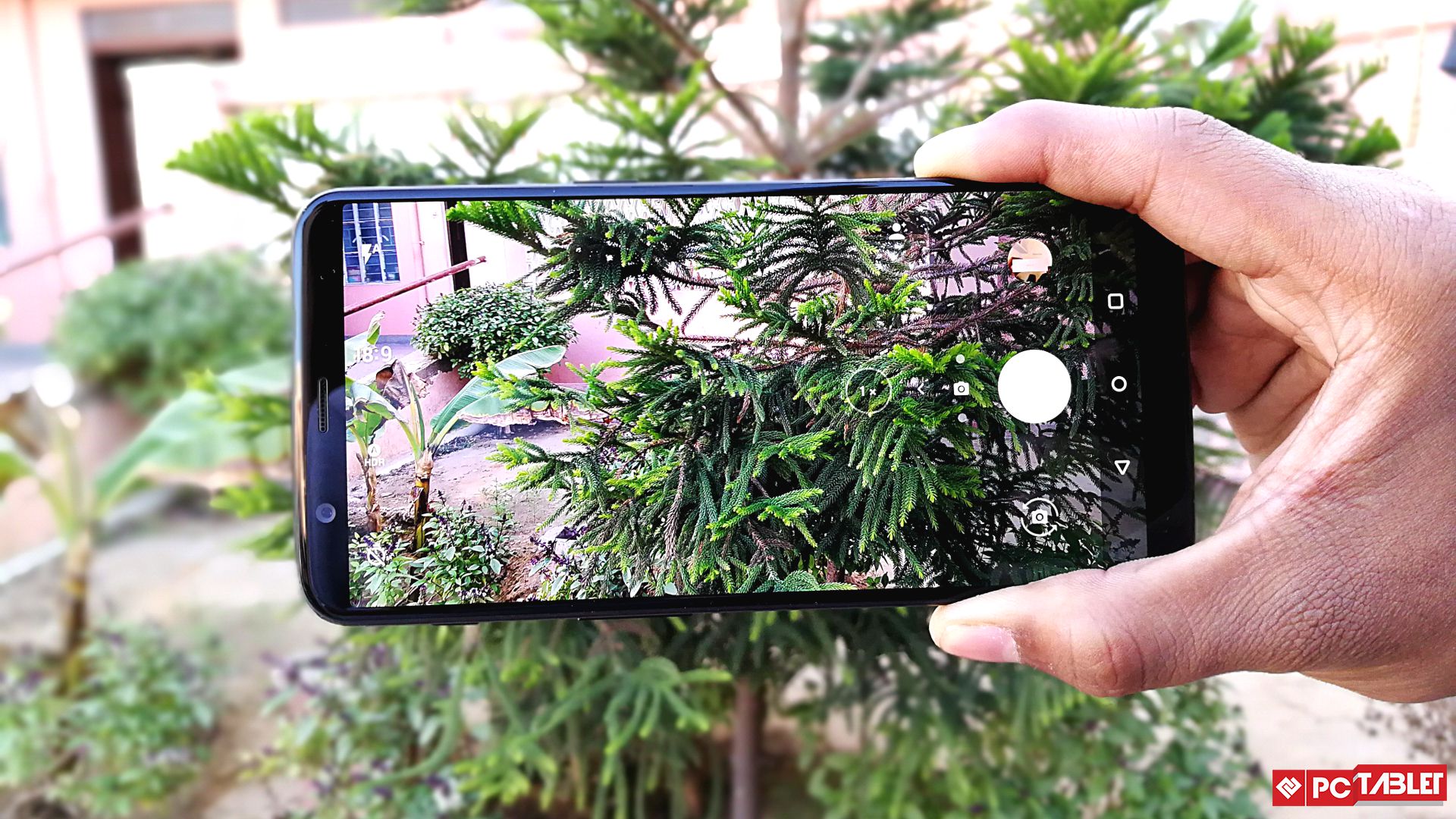 The camera on the OnePlus 5T is the same 16MP+20MP dual camera setup found on the OnePlus 5. Shots taken in daylight looked sharp and crisp with plenty of details to gawk at. Photos looked punchy and clean as long as you feed in decent amounts of light, probably as good what you’d get from the likes of the iPhone X or the Galaxy S8. 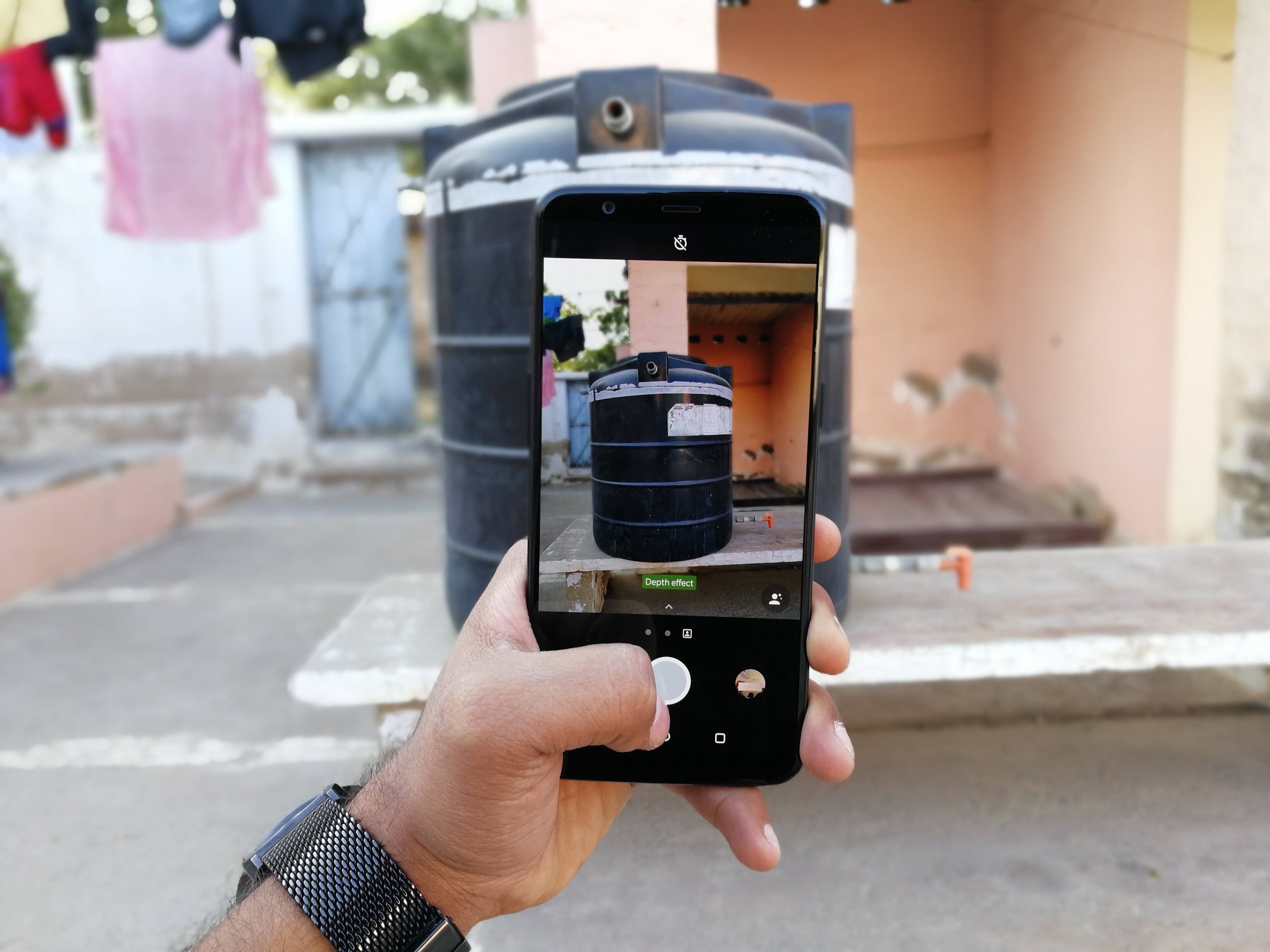 Otherwise, the OnePlus 5T is one of the best camera phones you can find in this price range. As daylight shots taken from the OnePlus 5T pack of a lot of details and for the most part – are worth drooling over. I’ve also come away impressed with 5T’s Portrait mode. It’s rather good at edge detection and captures different subjects rather well.

I was also impressed with the 5T’s OIS while shooting videos, as it fixes the bumpy footage while processing videos. But then again, the stabilization struggles to maintain the same efficiency in low-light conditions. 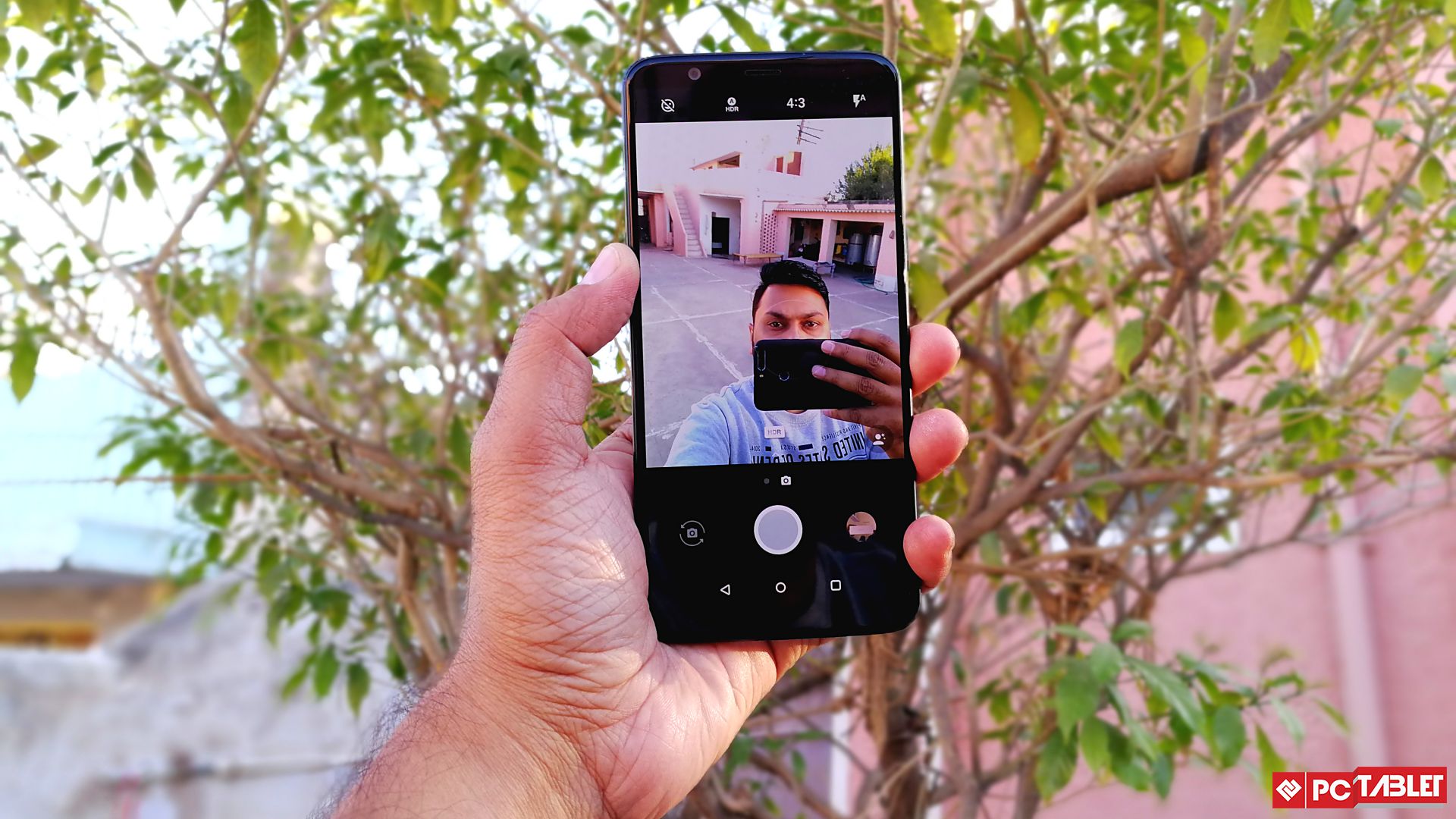 For selfies, the OnePlus 5T gets a 16MP front-facing shooter, which is quite impressive on paper. Selfies turned out crisp and sharp, a snap you won’t mind sharing on Facebook and Instagram. However, I would have loved to see better contrast and more vibrant colors as highlights in the background appeared blown out; even colors looked a bit dull and jaded to me.

The phone runs Android 7.1.1 Nougat and Oxygen OS UI, which is clean as a whistle. Its essentially pure, untouched Android, as Google intended to be, though with subtle tweaks that only enhance the overall user experience.  The software experience was close to what you’d call Android Nirvana. It has a subtle and minimalist feel to it with no bloatware at all. It showed no signs of lagging or slowing down no matter how many apps I was jiggling with.

It’s a haven for Android users thanks to useful additions and a wide array of customization options. Oxygen OS lets you choose among light and dark themes, assign app launch shortcuts, change color schemes, customize fonts and icons, and a whole lot of gestures that you can enable, and more.

Not to forget, it also gets a feature called Parallel apps that lets you duplicate popular social apps such as Facebook, Twitter, or Instagram. It essentially allows users to run the same app on two different accounts.

Other notable features include Reading Mode, and Gaming Do Not Disturb Mode. The former subtly changes the phone’s display which makes it better for reading, while the latter can be activated to block notifications while you’re gaming. 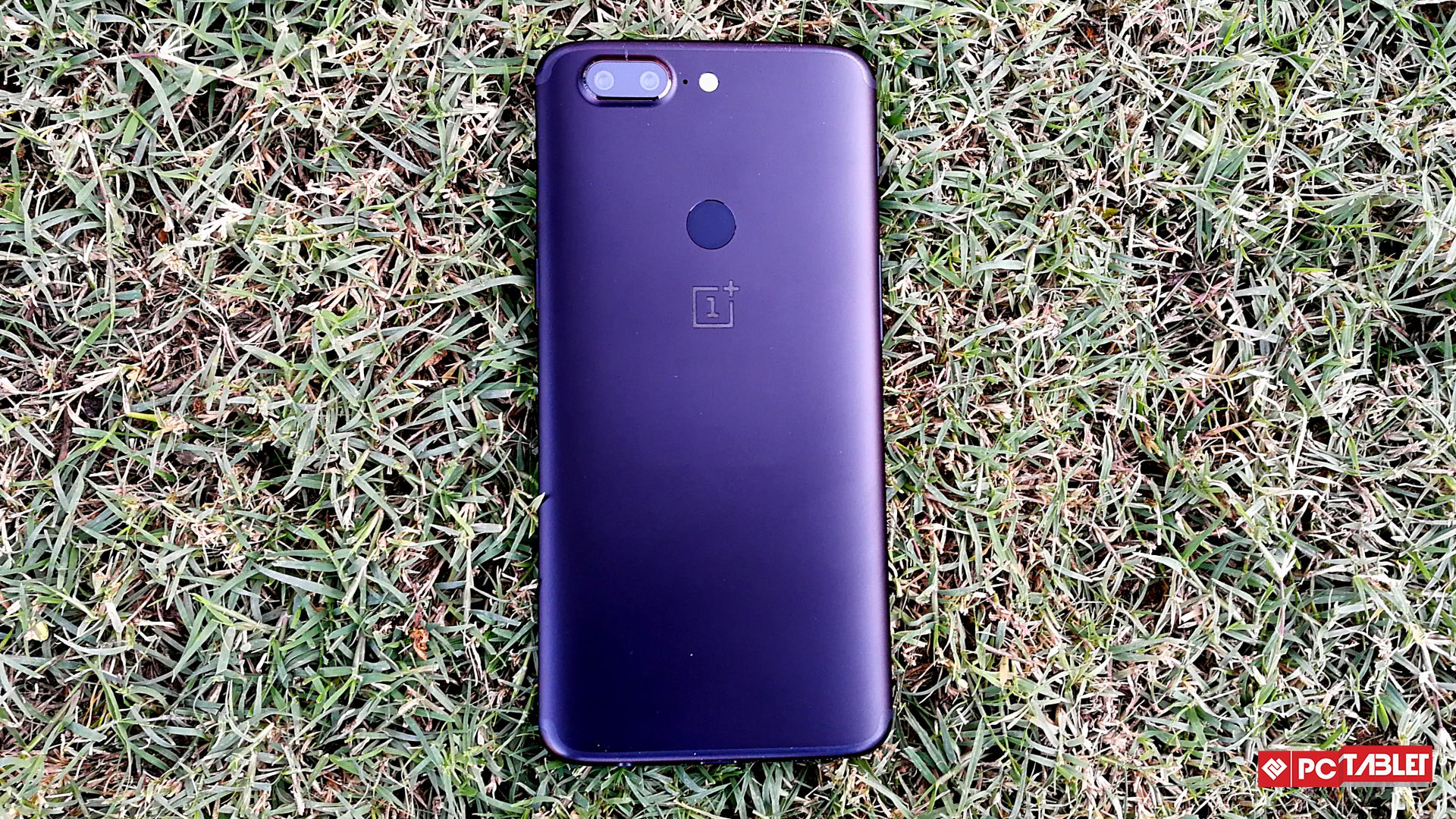 Battery performance on the OnePlus 5T is also something that deserves applause. The phone’s 3300mAh battery was still running strong two days after a full charge, retaining as much as 20% juice. Even for power users, the device can easily last for more than 14 hours without completely fading away.

The standby time on this device is also pretty outstanding. Even charging the device isn’t much of a problem. With the charger that comes bundled with the smartphone, I was able to get about 50 percent juice in about 30 minutes. Fully charging the device takes just about an hour.

Is it worth the buck? 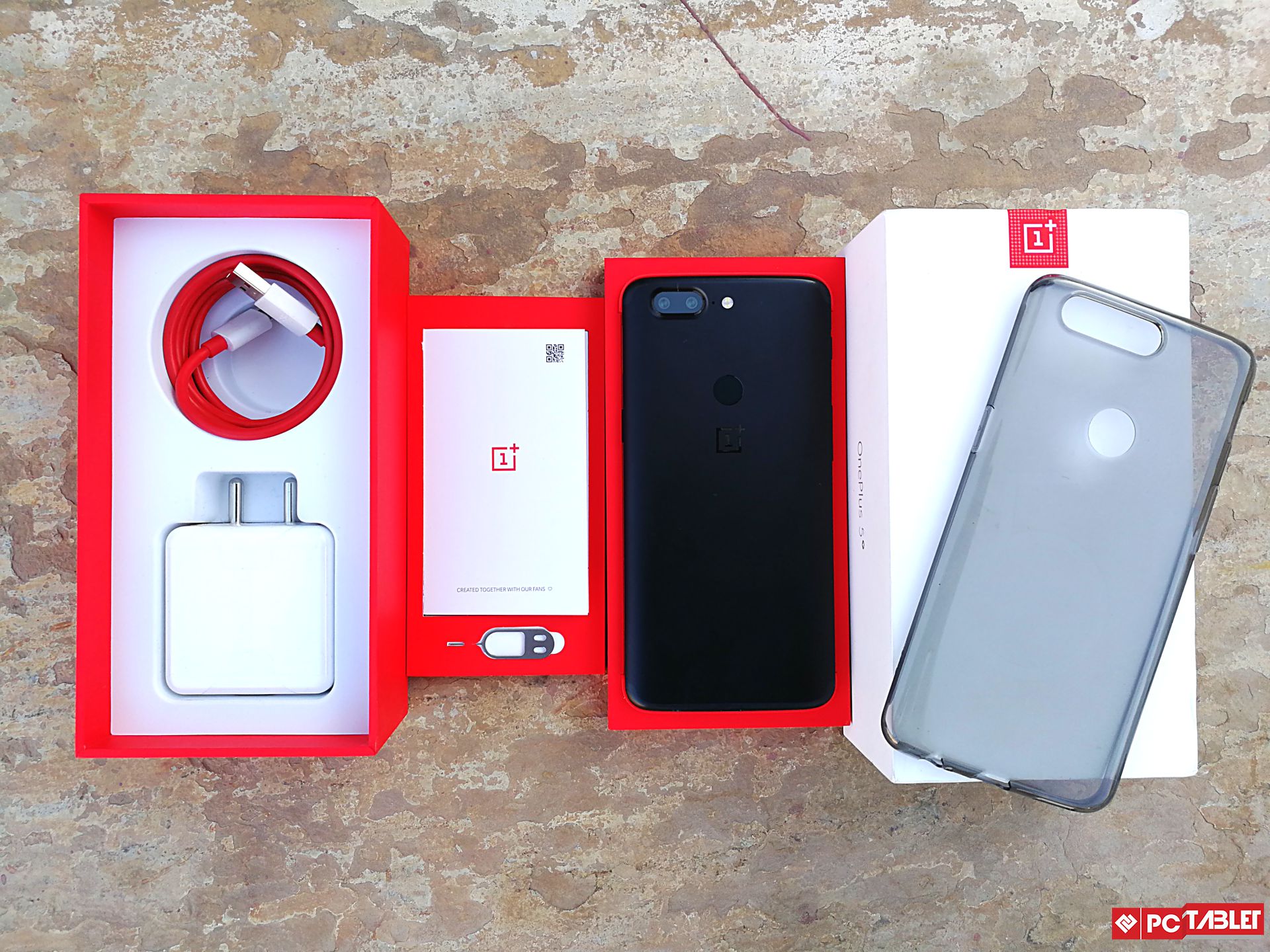 Absolutely! The OnePlus 5T has it all from its cutting-edge design to the way it makes a mockery of apps and games thrown at it; the smartphone is an absolute workhorse.

I had a blast after using the phone for a while, and allow me to be direct: the OnePlus 5T is a phone I can recommend without any second thoughts. It leaves you in awe of its solid performance across the board. Not only does it pack the familiar high-end hardware that fans have come to expect, but it also brings many tweaks and improvements over the OnePlus 5.

The OnePlus 5T gives you a flagship-like experience at a price point that you just can’t resist. Hands down, it’s totally worthy of being called a ‘true flagship killer.’ 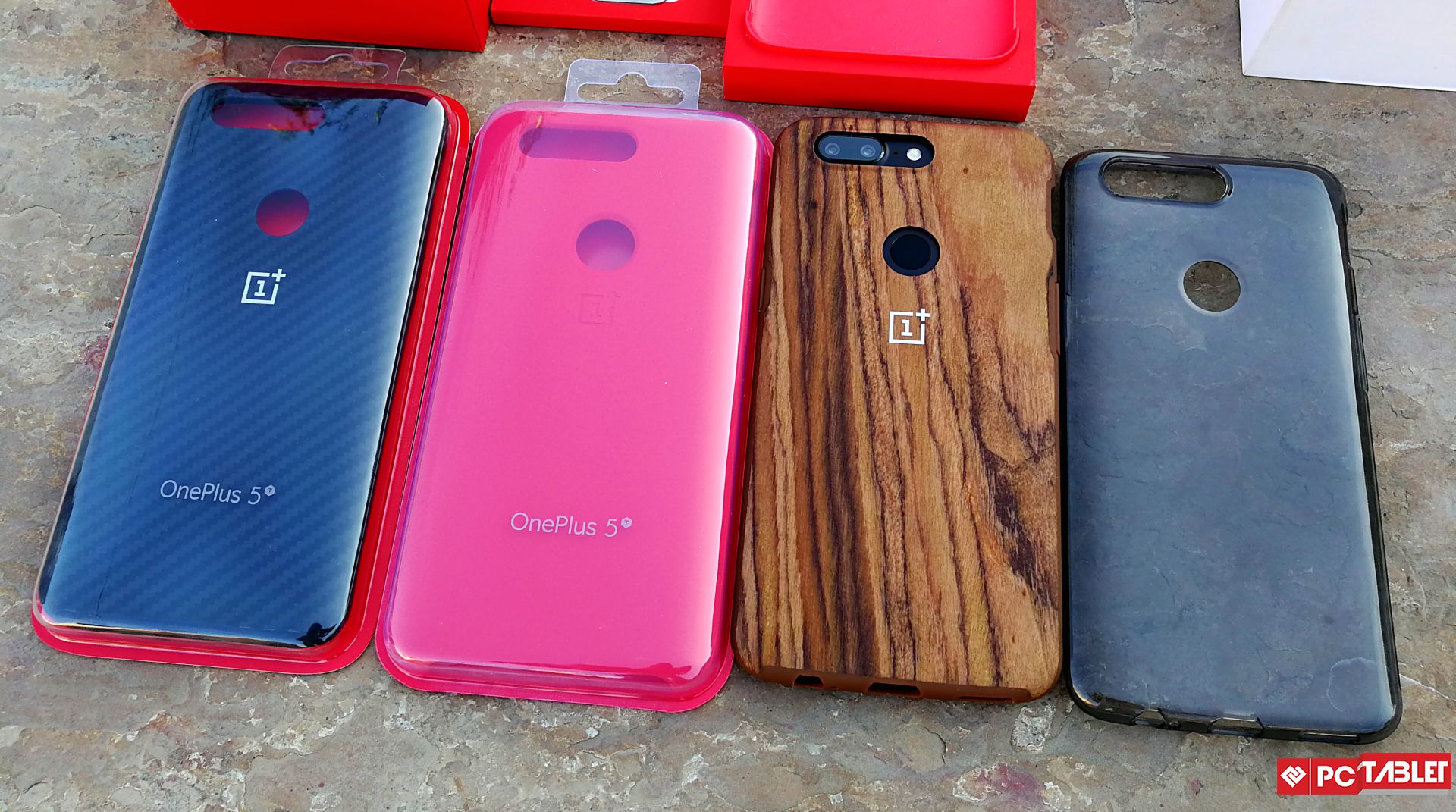 Yes, the screen may be only Full HD, and low-light camera performance could have been better, but for less than half the price compared to what Apple and Samsung charge for their flagships, the OnePlus 5T is a no-brainer. It gives you that near-flagship experience that fans have been waiting for. All in all, it’s an excellent smartphone, that too, at an irresistible price.