OnePlus 2 is expected to be refreshed with Android 7.1 Nougat. According to reports coming in, the OnePlus 2 was recently spotted on the GFXBench bench marking website. Interestingly, the handset was running the latest release of Android 7.1 Nougat.

Tagged under OnePlus 2 (A200x), the GFXBench 4.0 results reveal Tessellation as 1242 frames with 41.4 Fps. However, the Tessellation Offscreen was quoted as 2476 frames with 41.3 Fps. While the ALU pegged at 1786 frames, the FHD variant failed. The Car Chase also seen stated as failed. 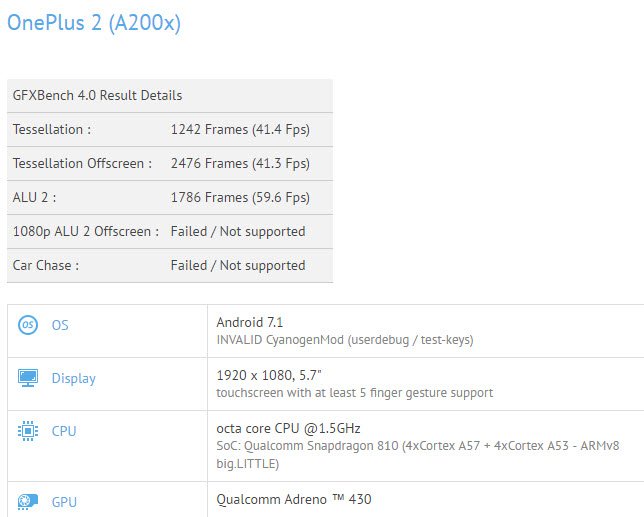 The new release from XDA developer forum provides support for a wide range of features such as short-cuts for most-used apps, improved battery, increased performance, visually-appealing themes, and wallpapers.

As a user, you will have to manually carry out the installation of custom-based ROM. However, it requires deep knowledge of rooting and installation of software manually on Android handsets.

This software is an experimental version and contains some bugs in it, which might affect some functionalities of the device and If the step-by-step installation process is not followed properly, there are chances of the smartphone getting bricked or being permanently irreparable.

We don’t have any exact information about the expected launch of Android 7.0 Nougat. However, based on reports from multiple sources, the company is currently testing the latest version of Android 7 Nougat on its original OnePlus One phone.

There are rumors that the company is planning to launch premium flagship OnePlus 3T by the end of November. You can also expect the launch of OnePlus 4 during Q2 2017.