Apple has launched MacBook Pro 2016 with Touch Bar in India. A Kerala-based IT retailer has confirmed the availability. The Cupertino-based tech giant silently launched the laptop without conducting any launch event. As of writing this, the MacBook Pro 2016 is listed on the official Apple India site with pricing. There is no option to buy from the official Apple site but you can contact an authorized dealer in your city to verify the availability.

There are reports that the new MacBook Pro 2016 with Touch Bar is available with few select dealers. An IT dealer, Itnet Infocom, based in Kochi, Kerala has confirmed the availability of the new MacBook Pro on Facebook in reply to a query posted by a customer. 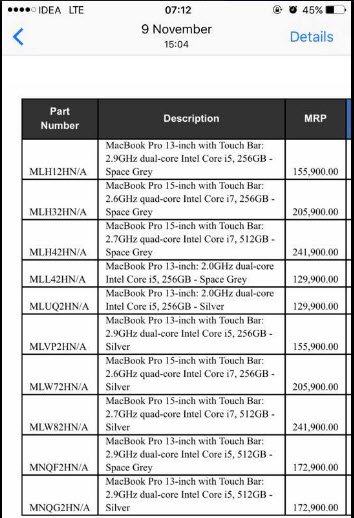 We are unable to view the new MacBook Pro 2016 on any of the e-commerce portals like Flipkart, Amazon. We expect that the stocks will be on the way and hit the retail shelves within the next 15 days. You can expect the widespread availability of the new MacBook before the end of December.

On the specifications front, the MacBook Pro 2016 with Touch Bar features a 13.3-inch and 15.4-inch LED IPS display with 500nits brightness. The laptop is available in with and without touch bar. Talking about storage, the new MacBook is only available in 256GB and 512GB variants with 8GB RAM.

Even though both variants ships with Stereo speakers with high dynamic range technology, the touch bar model offers three microphones instead of two in the normal model.