In this pandemic induced world, when our dependency on the internet has been grown quite a bit, being secure all the time is a necessity. This is where the need for an Anti-Virus kicks in. No matter which device you’re on, getting a good Antivirus is always advised.

For the safety of our readers, we bring one such Antivirus review, ‘Norton 360’. Now, as an Antivirus, Norton 360 has a proven track record and now deals beyond the purview of an Antivirus. The product now has so many useful add-on’s that make it a go-to choice when looking for an Antivirus solution.

The product can be directly purchased and downloaded from the Norton website or bought via any e-commerce retailer. In the past, we used to get an installation disc, but that has since been replaced with an activation code, which you get through an email. The Norton 360 is being offered in three different tiers, with bonus features in each of them.

To download the software, you need to create an account on the website, which you can then use to manage and control all your Norton 360 subscriptions. Once you are done with the account creation, you get the .exe(executable) file using which the main software package is downloaded.

During the installation process, you can choose your preferences and the data sharing policy. At the same installation time, there might be a quick scan happening in the background, so be a patient. Overall, the installation should not take more than 15 minutes, and the process in its entirety is very smooth.

The interface on the Norton 360 is quite intuitive. If you opt for the Deluxe or the Premium version, you also get access to the Norton web-panel, which further comes in handy to check on the different devices the program is currently installed on.

Both on the program and web-panel, we get to see the familiar icons and the yellow-black color scheme synonymous with the Norton 360 brand. Right on the screen, we get the options for all critical features like Device Security, Dark Web Monitoring, Secure VPN, Cloud Backup, and Password Manager.

Further, using the settings panel, you can tweak dozens of options depending on the type of usage you have.

Norton 360 is available on many platforms, including Windows, macOS, iOS, and Android. There are different sets of features included with each build on those platforms.

Norton 360 takes care of your Windows PC or Smartphone with its wide support. The company behind Norton has a proven track record and has been quite active in adding known malware to their library.

Ransomware is widespread in this day & age, and Norton 360 comes in handy here as well. The software keeps a check on malicious links when you are browsing the web. It even lets you be safe from attacks via the Dark Web in certain countries. 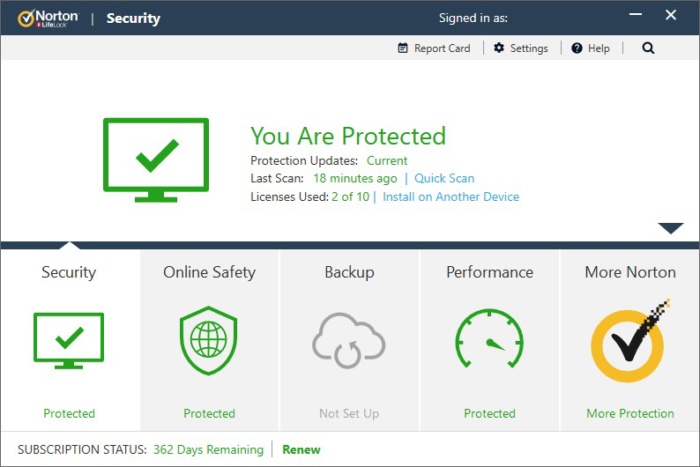 With the Norton 360, you get Up to 100 GB of cloud storage to store and protect important files and documents as a preventative measure to data loss due to hard drive failures, stolen devices, and even ransomware. This is only available on the Premium tier as of now.

This is one feature that we haven’t seen on other Antivirus products as of now. SafeCam Alerts you to attempts to access your webcam and blocks those who are not authorized to access it. This is a nifty feature considering the current scenarios where we are very much dependent on Video Calling apps.

Norton 360 also has a robust password manager to save your passwords securely and sync across all your devices. You can also change the saving method to manual from automatic based on your convenience.

Quite an important these days considering how early this new generation gets access to PCs and Mobile devices. Parental Control here helps children safely explore the Internet. For now, this feature is only available only to Deluxe and Premium tier users.

On the main aspect, during our tests, Norton 360 performed quite well on all fronts.  It was quick in detecting malware and neutralizing them. The web protection and firewall protection worked as expected and kept us safe from harmful links and pages.

The Anti-Virus was quick in neutralizing possible threats and had constantly been getting library updates during our testing period.

When looking purely at an Antivirus, the Norton 360 is one of the best options you could get right now. We put the system through its pace, and it performed well. The Standard version only has access to a handful of features that we mentioned in our review. Moreover, this Standard version can only be used on a single PC and a mobile device.

IF you need to access all the features, you will have to shell a lot more than the INR 2,099 to get either the Deluxe or Premium tier. Both these options let you use the program on more than three devices simultaneously.