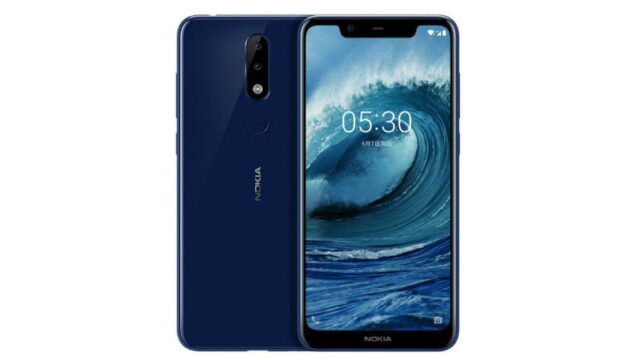 HMD Global has finally announced the much awaited Nokia X5 smartphone in China. The handset becomes the second device in the Nokia X series to go official this year, after the Nokia X6 that launched earlier this year.

In terms of specifications, the Nokia X5 features a 5.86-inch HD+ display having an aspect ratio of 19:9. Besides, the device boasts a screen-to-body ratio of 84 percent. There’s also a display notch on the front – a trend increasingly adopted by Android manufacturers these days.

Under the hood, the handset gets powered by MediaTek Helio P60 processor bundled with either 3GB RAM/32GB storage or 4GB RAM/64GB of built-in storage. The device also gets a microSD slot that allows users to expand storage to upto 256GB.

In the photography department, the Nokia X5 gets dual lens (13MP+5MP) primary camera sensor with f/2.0 aperture and LED flash. There’s also a fingerprint scanner on the back which is positioned just below the primary camera. For selfies, the device gets an 8MP front facing shooter with f/2.2 aperture and 80.4 degree field-of-view. The handset’s camera is also equipped with AI image technology, portrait mode, HDR mode, and other functions.

As far as OS goes, the Nokia X5 runs stock Android 8.1 Oreo. Besides, the company has also promised monthly security patches and timely Android updates for the handset.

Elsewhere, juicing up the handset is a 3060mAh battery. The company claims it offers 27 hours of standby time and 17.5 hours of talktime. Connectivity options on the handset include dual SIM (4G VoLTE) slots, a 3.5mm jack, USB Type C Port, GPS, Bluetooth, Wi-Fi, as well as FM Radio.

The Nokia X5 goes on sale starting July 19 in China and will be offered in Night Black, Baltic Sea Blue, and Glacier White colour options. The handset comes in 3GB/32GB and 4GB/64GB RAM and storage configurations priced at CNY 999 ( Rs 9999 approx.) and CNY 1399 ( Rs 13,999 approx.) respectively. The device is already open for registrations on Suning.com