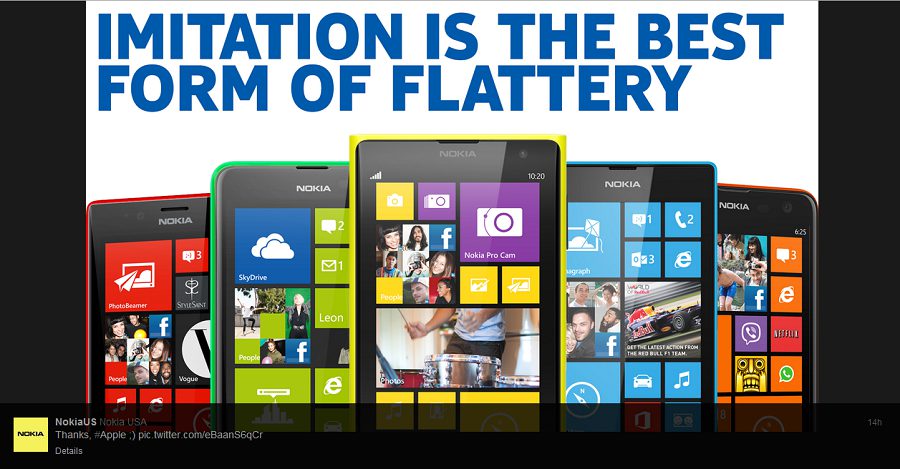 The comments from Nokia surprisingly come at a time when it is struggling to find a way for raising its market share from the micro level. Minutes after Apple announced that its “cheap” iPhone 5C would be available in five different colors, Nokia tweeted “Imitation is the best form of flattery,” a line adjoining the graphic showing off Nokia Lumia’s lineup of colorful smartphones.

And if that was not all, Nokia UK’s another tweet carrying an offensively bold message directed squarely at the Cupertino company’s CEO announcement of unveiling gold colored iPhone soon followed – Real gangsters don’t use gold phones.

Nokia is not the first to sells devices in different vibrant colors, Apple started it long ago with iPods. The strongest selling point for Nokia’s Lumia line has been its camera, in my opinion. It’s what missing in iPhone, currently. But then, there’s True Tone flash that adjusts color and intensity to make flash photos appear more natural and overcomes this shortfall of iPhones.

That said, Apple’s iPhone 5C is aimed at the more budget end of the market. Maybe that’s why Nokia considers Apple as a competitor or possibly, it wants to keep its main benifactor (Microsoft) in good humor.