Nokia once the most beloved smartphone brand is back. Nokia’s journey for the past couple of years has been very rocky with Symbian dying out, their transition to Windows OS. The current owner, HMD Global has done an excellent job of reviving the brand. Nokia’s new approach is to provide good hardware, latest Android OS with fast updates at very competitive prices. This approach has been strictly followed in this year’s Nokia smartphone lineup.

The mid-range smartphone segment has seen a decline, with more buyers opting for budget smartphones under the Rs 15,000 mark specially in India. Brands like Honor and Vivo have been continuously adding more smartphones in this segment, but they haven’t been very successful lately.

Enter Nokia 7 Plus, a mid range smartphone with the trendy 18:9 display, a solid build quality and the Zeiss optics that reminds people of the OG Nokia smartphones.

We have been using the Nokia 7 Plus as our daily driver for the past 3 weeks. The Nokia 7 Plus comes with 4GB RAM and 64GB storage, with Android 8.1 Oreo under Android One program. 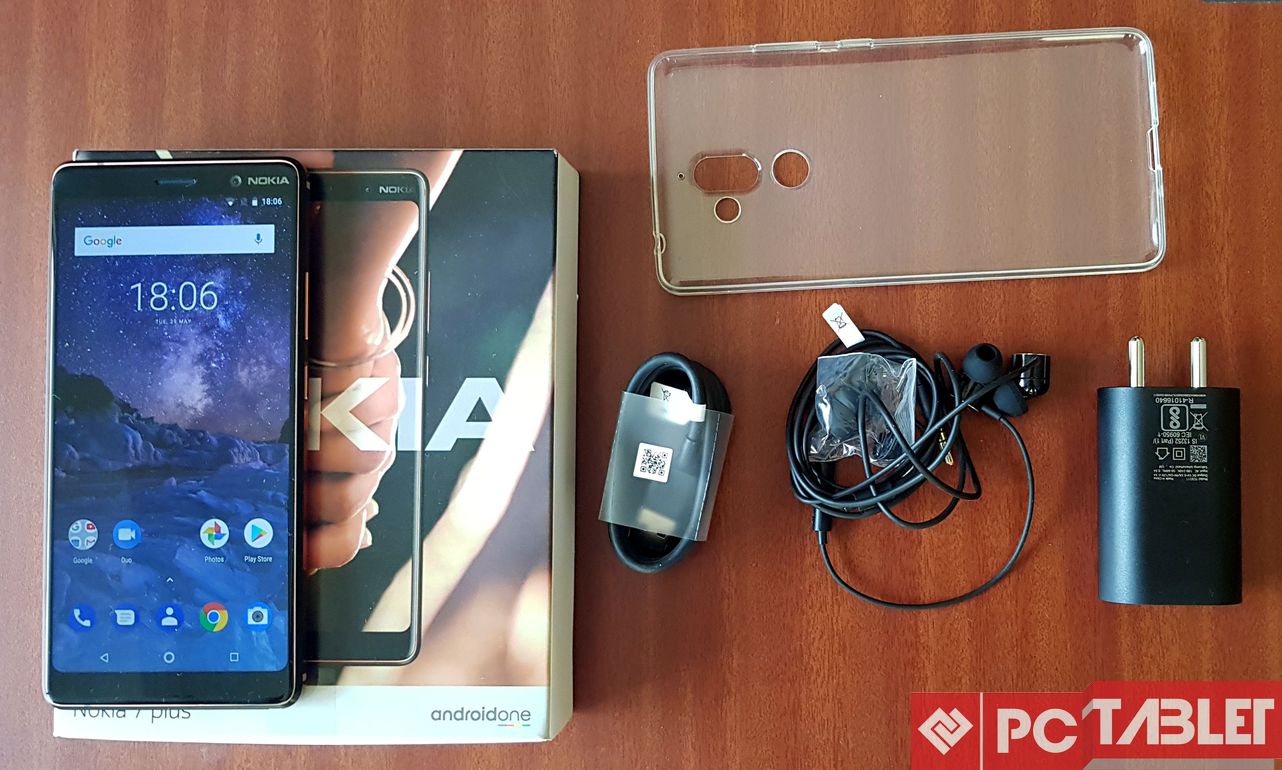 The box is fairly simple in design. As soon as you slide the top part, you are greeted with the smartphone. Underneath lies the documentation and the supplied silicon case followed by accessories.

Nokia smartphones are known for their design and quality, Nokia 7 Plus is no exception. The design of the phone right of the bat is very eye-catching and will grab the attention of both mid-range and premium segment buyers. The Nokia 7 Plus is forged out of a block of series 6000 aluminum with copper accents all around the smartphone. There’s a copper strip running around the sides of the smartphone with a thin copper wire running around the display complementing the outer strip. 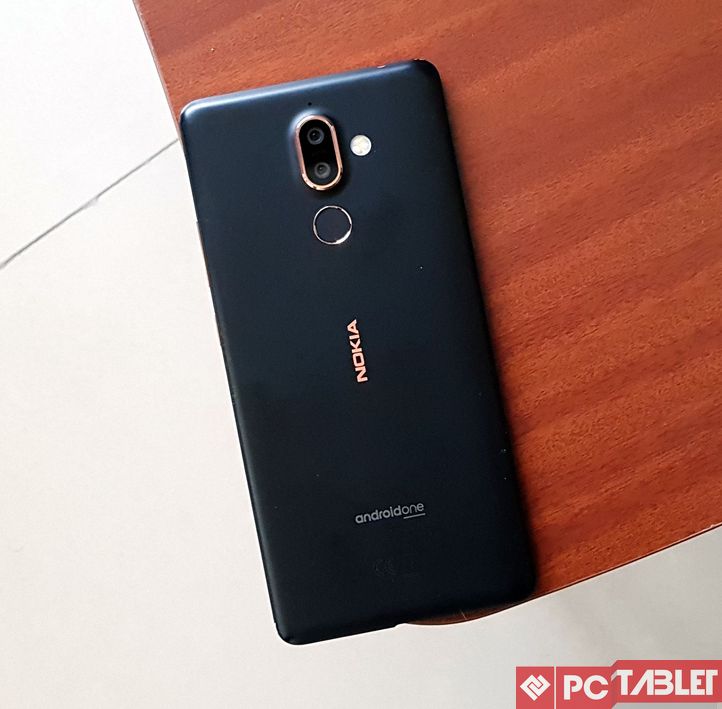 Though the smartphone is made out of aluminum but you will hardly feel it, since Nokia has applied a special 6-layer coat on the Nokia 7 Plus which gives it a ceramic feel. We very much liked the coating and its sort of similar to the one found on the LG G5. Now this paint coat does away with the cold metal feel, improves the grip but is a fingerprint magnet. 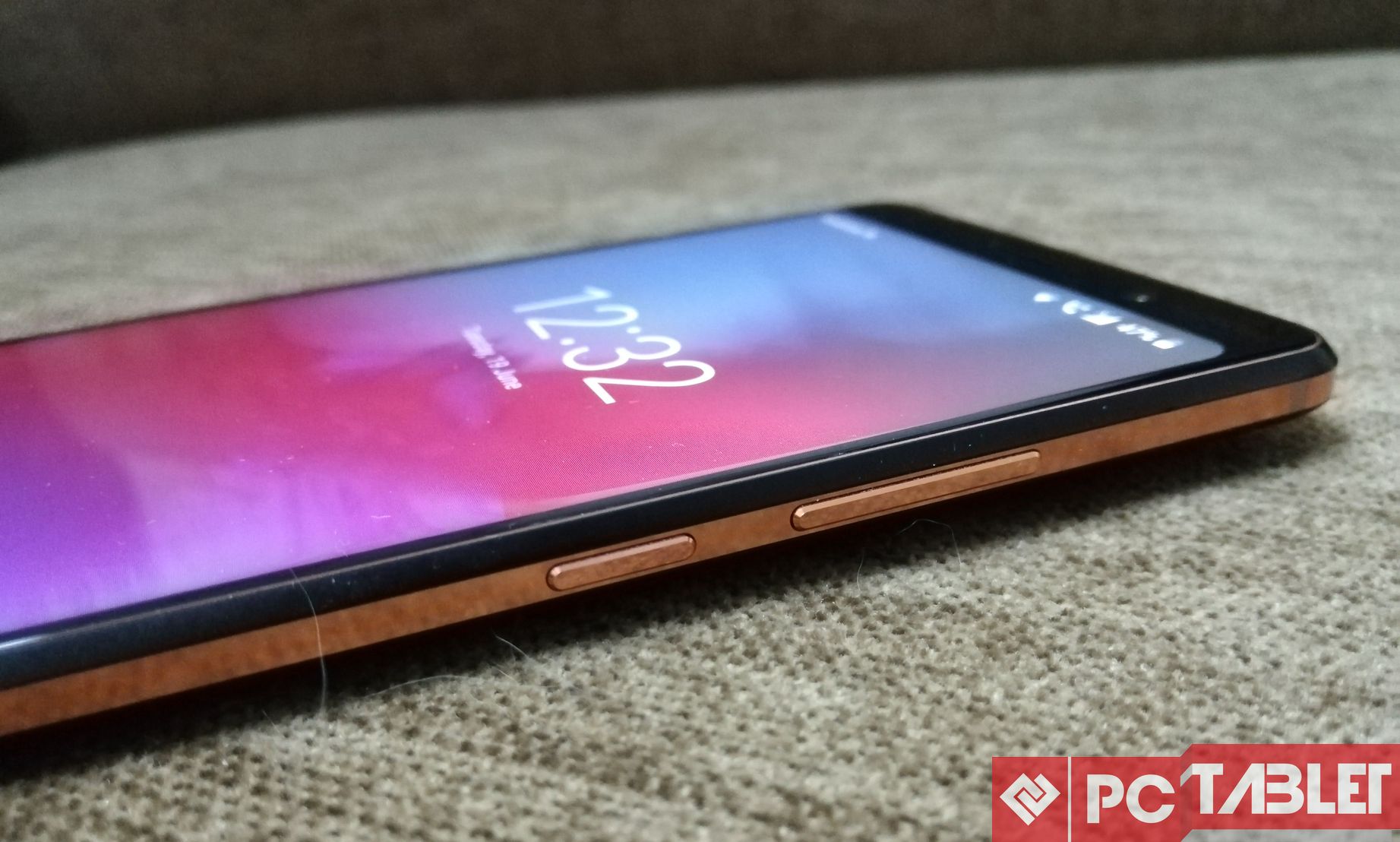 The Nokia 7 Plus carries the new trendy 18:9 aspect display with rounded corners and the front is largely covered by it. The panel used here is a 6-inch FHD+ panel with good color reproduction and viewing angles. On top is the loudspeaker, front camera and sensors and tucked away in the corner is the Nokia logo, which can be a controversial design choice but Nokia managed to make it pop less. This helps the logo to blend in. 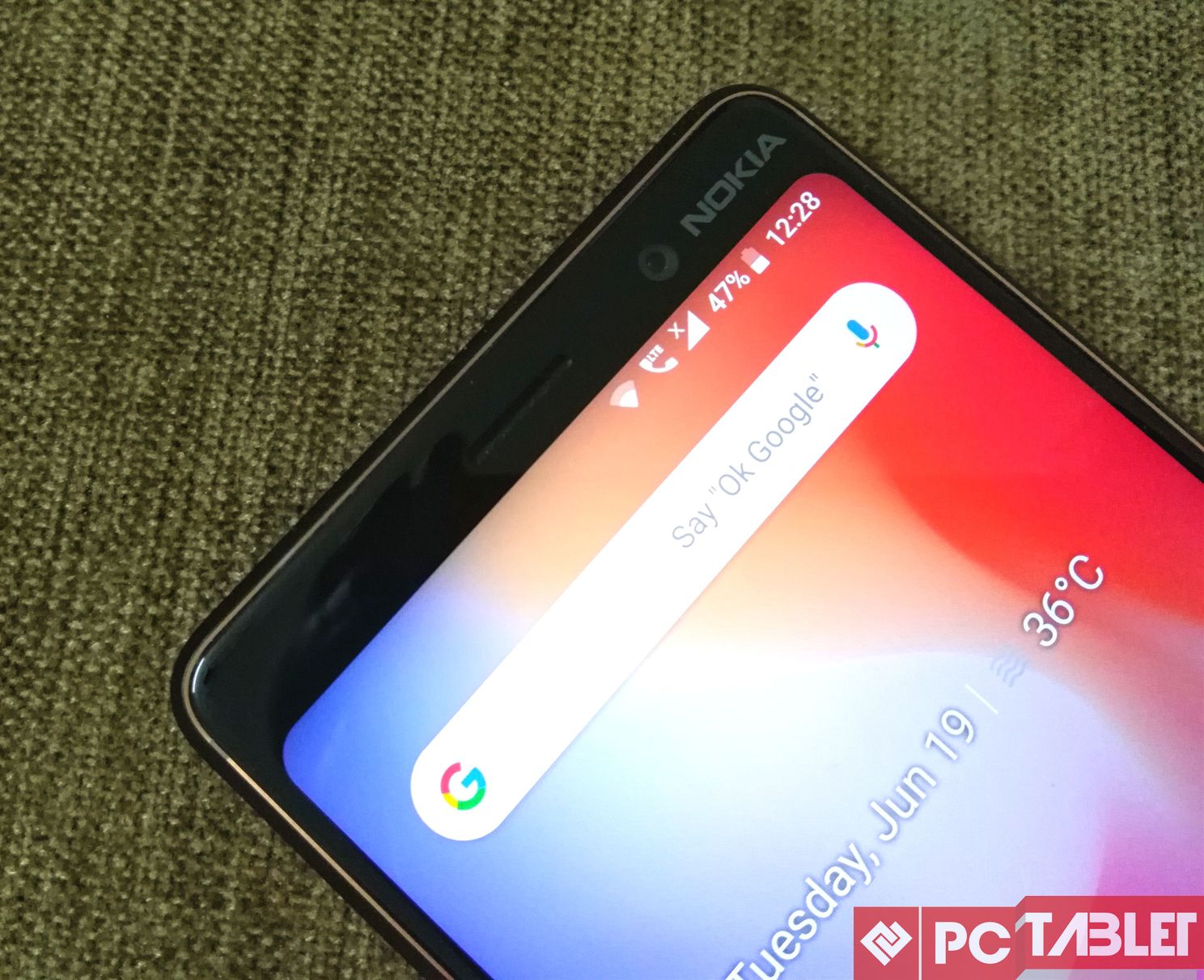 On the back you would find the fingerprint sensor in the center and the dual camera module just on top of it. The Dual camera module protrudes a bit and sports the Zeiss branding. The copper-colored theme is present here as well, with a copper ring around the fingerprint sensor and the camera module. The Nokia logo can be found on the back, vertically placed, painted in copper color, underneath lies the regulatory info and Android One logo. The bottom of the smartphones houses the Type C port and a speaker grill. The 3.5mm audio jack is placed on the top. The power button and the volume rockers are placed on the right side while the dual sim hybrid sim tray is placed on the left side of the smartphone. 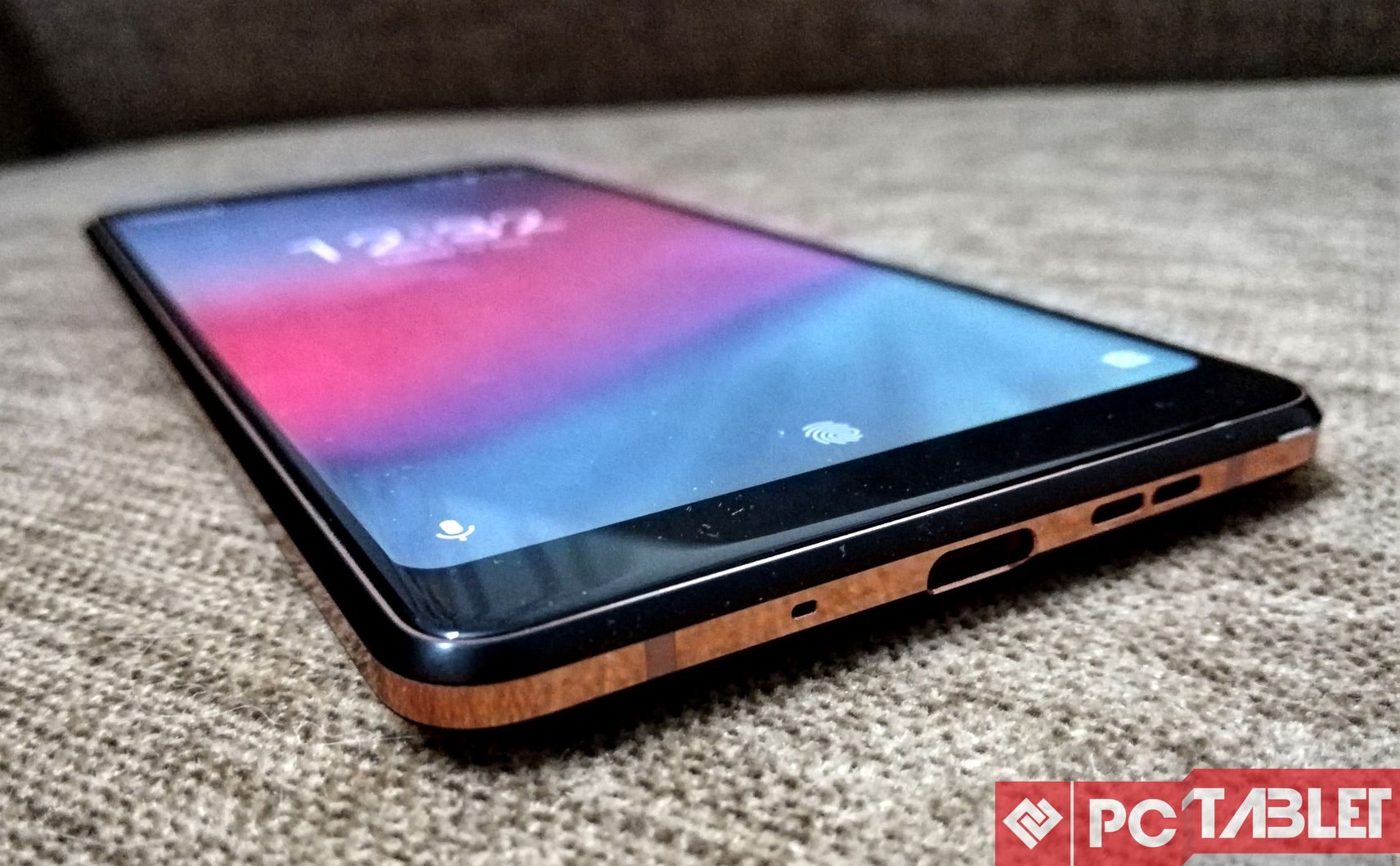 Overall, we liked the design, the dual tone color scheme could have been a bit gaudy, but we really liked the scheme. The rounded corners and the slim profile makes the smartphone easy to handle. The heft and weight reassures us of the excellent build quality.

The display panel found on the Nokia 7 Plus is one of the best LCD panels we’ve seen in the market. The colors are vibrant and accurate with deep blacks (not up to the levels of OLED panels). The outdoor visibility is excellent. The FHD+ resolution makes it tough to make out pixels and turns this display ideal for media consumption. 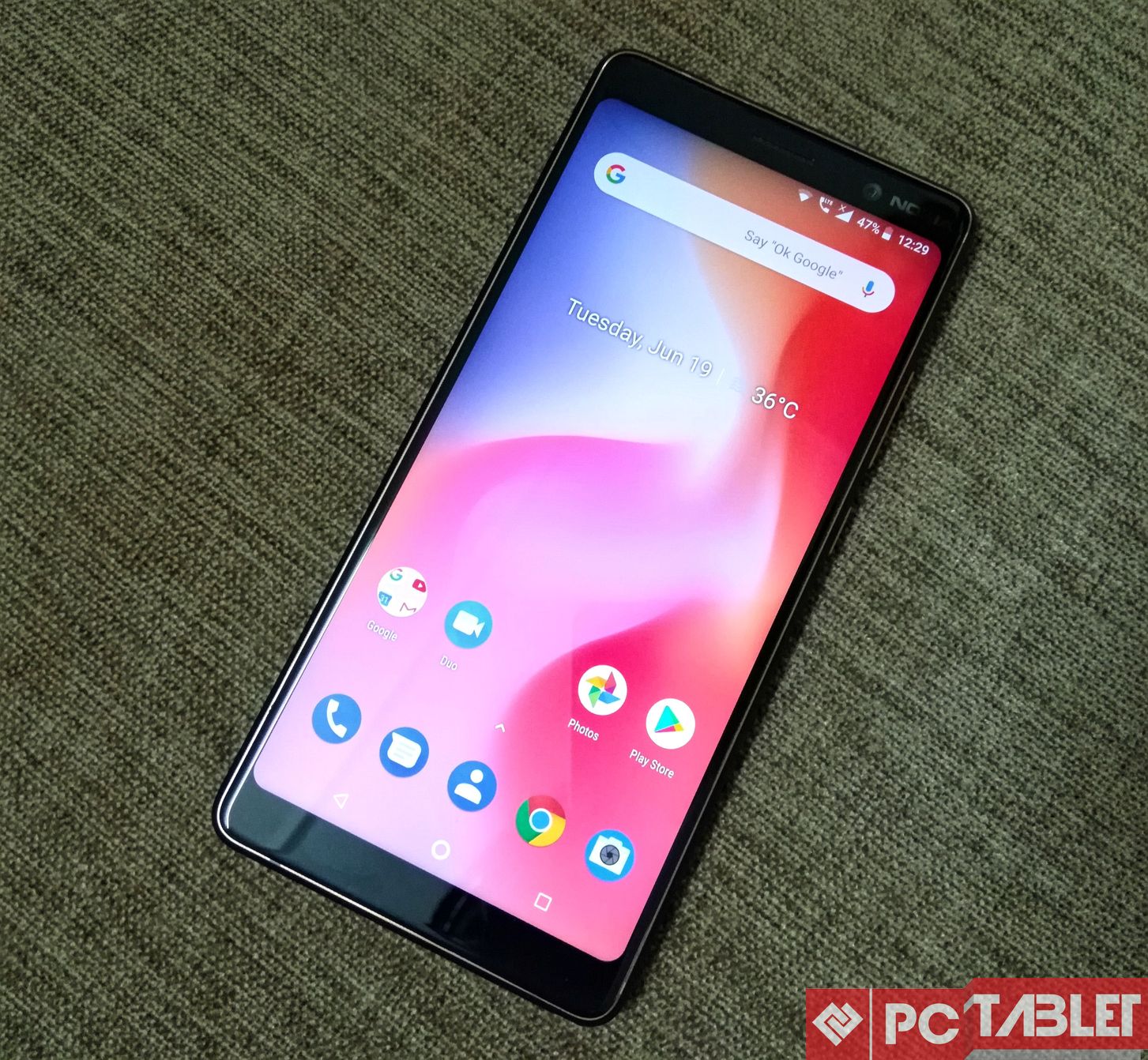 Nokia has also added an ambient display mode and Night light. The only thing we missed are the color settings for calibrating the display.

Nokia smartphones have come out with pure android version in the past, but with this year’s smartphone lineup Nokia has gone all in. They have officially enrolled under the Android One program. So, what it means is, the smartphone is running the latest pure Android version with default apps with the exception of Nokia support and Camera app.

Now Android One gives you two years of updates to the core operating system, so it’s safe to say that Nokia will be updating the 7 Plus up to Android Q. In addition to this, smartphones under Android One come with guaranteed three years of monthly security updates.

Out of the box the software experience is kind of similar to what you would find on the Pixel devices. Right from the launcher to the Google apps like Phone, Messages, Maps, Chrome are default and the same ones used on the pixel phones. The only exception is the Camera app and the support app that has been added on by Nokia. It’s got all the gestures that you will find in the pixel devices, like double tap to wake, double tap the power button to launch camera, Night light, fingerprint sensor down spice for notification etc.

Thanks to the Stock Android, the phone is buttery smooth and we didn’t find any lags. Perhaps we are at a time where the Qualcomm chips, even the mid-range ones perform so well and are equivalent to the flagships in day to day tasks.

We ran into a bug and have communicated to the Nokia team: at times during charging, at around the 75% battery mark, the phone just stops charging and starts displaying temperature warnings. This warning disappears as soon as the battery reaches the 80% mark.

With this chipset, the 7 Plus just flies. We didn’t run into any lags or hiccups during our testing period. Switching between apps, scrolling through pages, multi-tasking is silky smooth. The GPS works fine and we got a lock in seconds with accuracy up to 3-4 meters which is exceptionally well. Call quality and reception is well enough.

Nokia has packed the 7 Plus with a massive 3,800 mAh battery, which perhaps is one of the USP of this smartphone. Nokia says it’ll deliver two days of use – and we won’t dispute this claim. In our tests we managed to get the smartphone working for 2 full days with moderate usage. By any chances you end up draining the battery in a day, fret not, Nokia 7 Plus comes with fast charging which should charge the smartphone under 2 ½ hrs.

One thing to note here is, the Snapdragon 600 series is not that power efficient when it comes to graphic intensive tasks when compared to the Snapdragon 800 series. When gaming, we lost close to 10% battery in under 25 mins with screen brightness set at about 30%. Talking about gaming, we ran the most famous Android game this season, “PUBG” on the Nokia 7 Plus at ‘HD’ graphics and ‘High’ frame rate – and the gameplay was smooth.

Coming to the audio, With the Nokia 7 Plus, you have a single speaker on the bottom, considering the size of the bezels we wish Nokia could have added the stereo speakers on this one. The sound through the speaker is on the average side, with a little distortion caused at high volume. The output via the 3.5mm jack is good for a smartphone in this price category.

This is perhaps the area where we were surprised by the Nokia 7 Plus. It’s got the same camera setup that you’d find on the higher Nokia 8 Sirocco. Nokia 7 plus is fitted with a dual rear camera setup, with the main camera being a 12 MP sensor with f/1.75 aperture and a 13MP sensor with f/2.6 aperture for that 2X optical zoom. The cherry on top are the Zeiss optics, which are present on both the front and rear cameras. 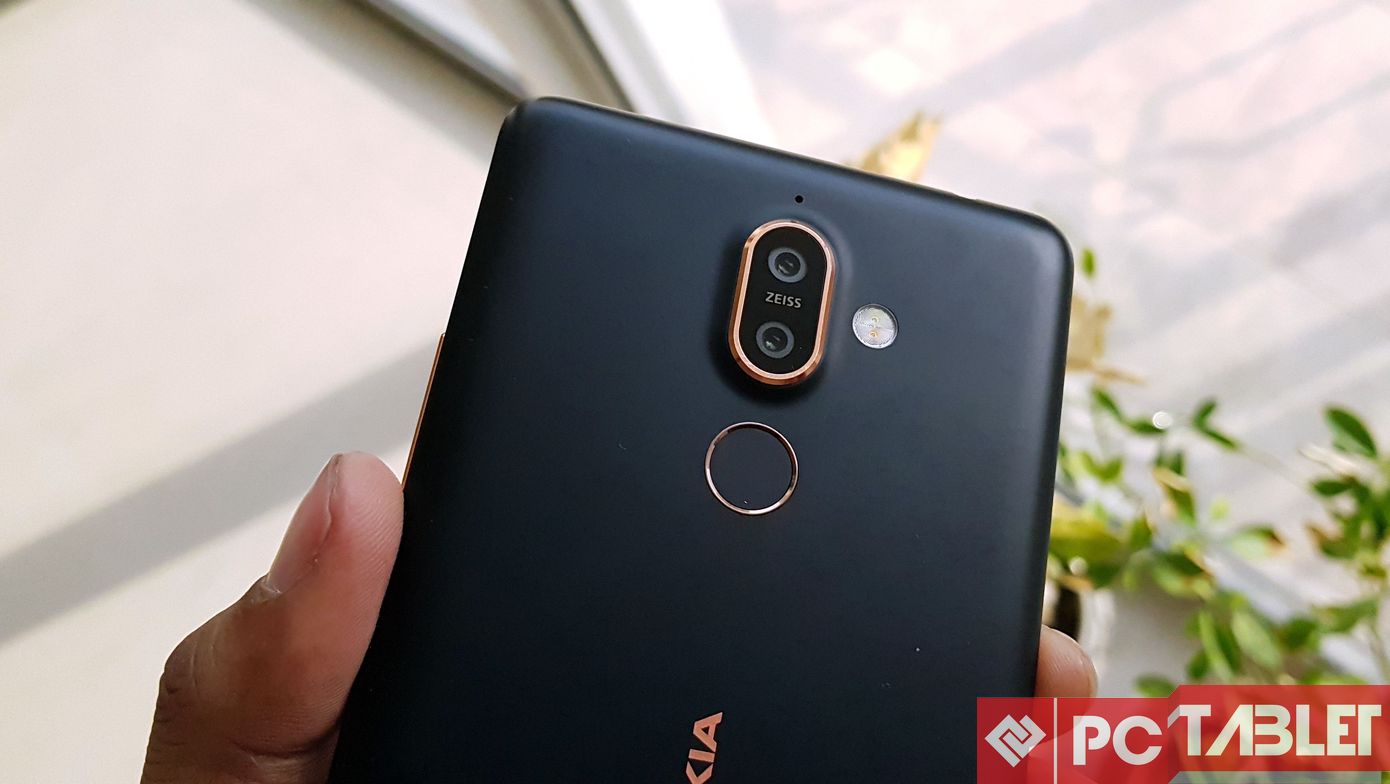 Now the main camera has a nice wide aperture with bigger pixels, in good light, the 7 Plus delivers some great images. This is carried on to the dim light situation as well. The shutter speeds are great with Zero shutter lag (ZSL) working just fine.

The areas where Nokia needs to work are the processing part, at times the images tend to be over sharpened and HDR (high dynamic range), which is not the best one we’ve seen. At times under overcast conditions the smartphone struggled. In the Auto mode the exposures are close to perfect but as soon as you change the focus point the exposure settings go haywire.

In artificial lighting conditions, the Nokia 7 Plus managed to outperform the OnePlus 6, we tweeted a same image taken from both the 7 Plus and OnePlus 6 and users preferred the image taken by the 7 Plus. The second sensor on the rear is a Zoom lens, switching to the zoom lens is quick, just tap the 2x icon. In most cases the second lens is used but in dark situations the main sensor comes into play with digital zoom (something the Samsung also does with the Galaxy lineup) to provide better images.

Modes like Live Bokeh are present here as well, now with the Bokeh mode you have the ability to adjust the amount of blur. Portrait mode is available on the front camera and works great. But the edge detection needs a little work, that being said the portraits are good enough to be shared on Instagram (for those crisp selfie lovers). Another mode that you might like is “Bothie”, which was announced on the Nokia 8 last year. Now Bothie gives you the ability to take a picture from both the front camera and rear camera at the same exact time and stiches them both during post post processing.

Overall, we liked the camera performance and you’re getting a lot of camera for the money and the quality here is commendable. 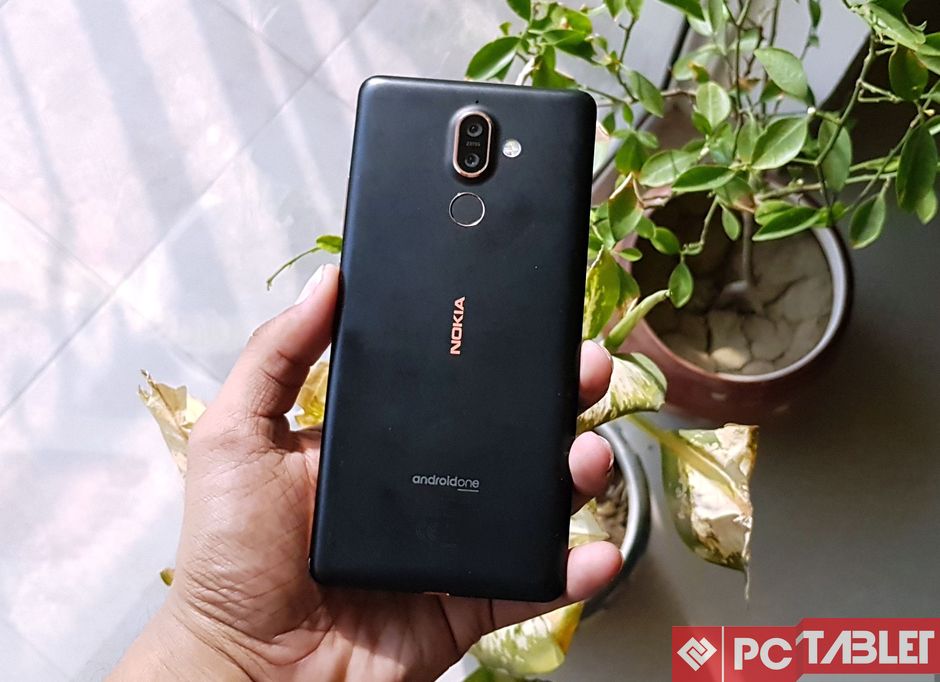 Nokia 7 Plus can be considered as the most important offering in Nokia smartphone lineup. HMD has done a great job reviving the brand and Nokia 7 Plus is an example of it. Nokia 7 Plus is a step up from last year’s Nokia 7 and Nokia 8. By embracing the all new 18:9 aspect ratio display and the dual-tone premium design, Nokia has given the smartphone a modern treatment.

The cameras with Zeiss optics and Android One are just cherry on top. Features like Live Bokeh, Bothie and 2X zoom are nifty. We had trouble finding issues with the 7 Plus during our testing time, other than the charging bug we didn’t notice anything serious. The only thing we feel needed to be added are a pair of stereo speakers, considering the size of the bezels. Other than this everything is on point.

We totally recommend the Nokia 7 Plus to people looking for a mid-range smartphone with good cameras and a premium design.