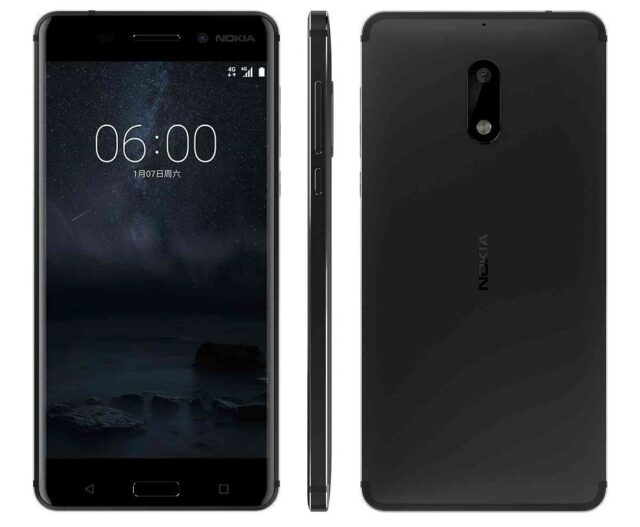 HMD Global has finally launched the new Nokia 6 smartphone in China, the first Nokia smartphone to go official after an almost three year gap. Nokia has handed exclusive rights to HMD to manufacture and sell its branded smartphones, and the first smartphone by HMD global is now on sale in China. Nokia 6 can be purchased via JD.com in China starting early 2017 at CNY 1699 (around $245). The smartphone’s availability and pricing outside of China is yet to be announced.

Under the hood, the smartphone gets powered by a Snapdragon 430 octa-core processor bundled with Adreno 505 GPU and 4GB of RAM. In terms of storage, the Nokia D1 packs 64GB of built-in storage which is further expandable up to 128GB via microSD slot.

On the camera front, the Nokia 6 sports a 16MP primary camera bundled with dual-tone LED flash, phase detection auto-focus(PDAF), and f/2.0 aperture. For selfies, the smartphone gets an MP front-facing shooter with 84-degree wide angle lens and f/2.0 aperture.

Connectivity features on the phone include Bluetooth v4.1, GPS, USB OTG, and Wi-Fi. While juicing up the smartphone is a 3000 mAh battery. The Nokia 6 also comes with a fingerprint sensor along with Dolby Atmos Sound support. There’s a 3.5mm jack too! While in terms of color options, for now the Nokia 6 only comes in Black.

HMD Global also said that more Nokia handsets will arrive by the first half of 2017.  While past reports suggest that HMD Global is said to launch around five Nokia-branded smartphones by the end of 2017. A new leak also revealed that the rumored Nokia E1 and Nokia D1 smartphones will be unveiled at the upcoming MWC 2017 in Barcelona.