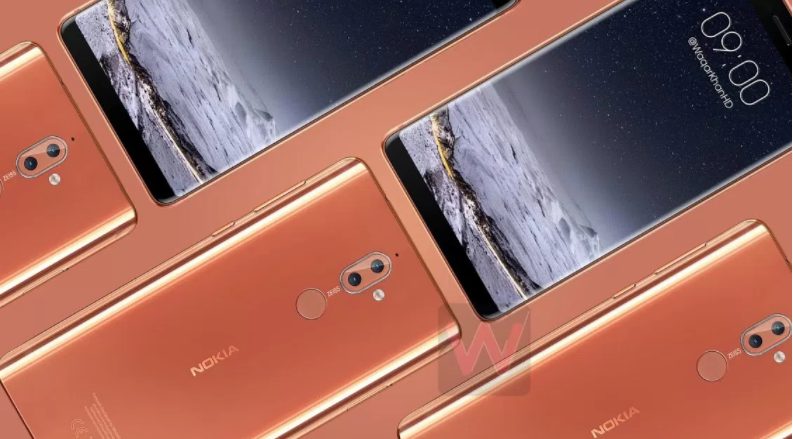 HMD Global has been working on a high-end smartphone after Nokia 8 which already released in many regions, Nokia 9. Nokia 2 is another offering from HMD Global which is an entry-level smartphone. Both of these smartphones have been leaked in some pictures revealing the full design of the smartphones.

Various pictures already leaked about these smartphones but the pictures leaked recently are in good quality with full back design. The picture was reported by Nokiapoweruser showing Nokia 2 in blue color with a single camera module and LED flash, Nokia branding (just like previous smartphones) and loudspeaker with a pinhole which seems to be a secondary microphone.

Nokia 9 also has been leaked in the same image revealing the back of the phone. The picture shows a dual camera setup with dual LED flash beside and a fingerprint sensor below it. There is Nokia branding as always and below the branding is the information printed about the phone.

The back panel also seems to be made of glass and also can see the curved edges just like Samsung Galaxy Note 5. We also have some leaked specifications about both the smartphones. Nokia 2 has been previously leaked in some pictures showing the front panel of the smartphone as well.

Nokia 9 also previously leaked on GFXBench showing the specifications of the smartphone. The Nokia 9 might be coming preinstalled with the Android 8.0 Oreo and might be powered by the latest Qualcomm Snapdragon 835 processor. The smartphone might be coming with 4GB RAM and 64GB internal storage. The display is said to be the 5.5 inches with no hint about the screen resolution or pixel density.

The device might be coming with wireless charging and feature an OLED display. The camera of Nokia 9 might be better than the Nokia 8 with dual lens Zeiss camera. The camera is tipped to be a dual 13MP sensor with OIS and with aperture f/2.0 and autofocus for the front-facing camera.