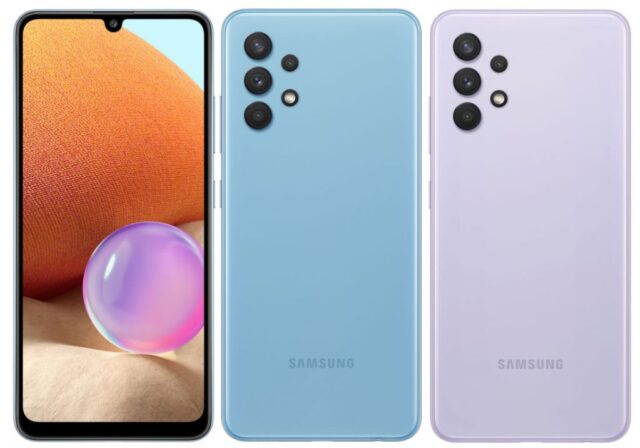 Samsung has launched a new Galaxy A32 version, one that comes with 8 GB of RAM and 128 GB of native storage. The phone comes powered by the MediaTek Helio G80 SoC and runs One UI 3.1 that is based on Android 11. On the front lies a 6.4-inch full HD+ Super AMOLED Infinity-U Display having 90 Hz refresh rate. The phone features a quad lens rear camera which includes a 64 MP primary lens of f/1.8 aperture, an 8 MP ultra-wide angle lens having 123 FOV, a 5 MP macro lens, and a 5 MP depth sensor. On the front lies a 20 MP selfie cam.

The new Samsung Galaxy A32 8GB RAM variant with 128 GB of storage is priced Rs. 23,499 and comes in shades of Awesome Black, Awesome Blue, and Awesome Violet. The model is available for purchase from almost all leading online and offline retail outlets in the country, including Samsung’s own retail locations.

The new Samsung Galaxy A32 8 GB RAM version joins the A32 model that comes with 6 GB of RAM and 128 GB of storage which Samsung had launched in March this year. The model is priced at Rs. 21,999 and is available in Awesome Black, Awesome Blue, Awesome Violet, and Awesome White colour options.

As already stated, the Samsung Galaxy A32 features the MediaTek Helio G80 SoC having eight cores. The 128 GB of native storage is further expandable to 1 TB via microSD cards. The phone also boasts of a RAM Plus feature which can make available up to 4 GB of virtual RAM if the situation so demands.

There is the 6.4-inch full-HD+ Super AMOLED Infinity-U Display on the front having 90 Hz refresh rates for a smoother scrolling effect. The phone runs One UI 3.1 based on Android 11. Power comes from a 500 mAh battery that is backed by 15W fast charging.

For optics, there is the 64 MP primary camera, an 8 MP ultra wide angle sensor having 123 degree field of view, a 5 MP depth sensor, and a 5 MP macro shooter. A 20 MP front shooter is accommodated within the front notch for selfie shots and video chats.

Connectivity options that the phone provides for include 4G LTE, Wi-Fi 802.11ac, Bluetooth v5.0, GPS/ A-GPS, NFC, and a USB Type-C port. Plus, there is a 3.5mm headphone jack as well. Another convenient feature of the phone is the in-display fingerprint sensor that it comes with.