The official unveiling date for Samsung’s upcoming premium flagship – the Galaxy Note 8 launch is inching closer and closer, and now the phone has come up with its best-yet view in a set of new renders. As the new renders have revealed, Samsung’s upcoming flagship is expected arrive with a much higher screen to body ratio in contrast to the brand’s previous model – the Galaxy S8+. The phone is going to be launched on 23rd August, and the South Korean Giant has already started sending media invitations for the launch day of this Phablet.

After the disastrous Galaxy Note 7 battery failures and deceased of the flagship last year, Galaxy Note 8 is the biggest comeback for Samsung. As officially confirmed by the South Korean Multinational Samsung Electronics Co. Ltd (SSNLF), its upcoming premium smartphone – the much-hyped Galaxy Note 8 will be marking its commercial debut on 23rd August at an official event and the entire mobile world is going gaga over its exclusive features and stunning look. And adding to this excitement, a new render has showcased the best yet view of the flagship. 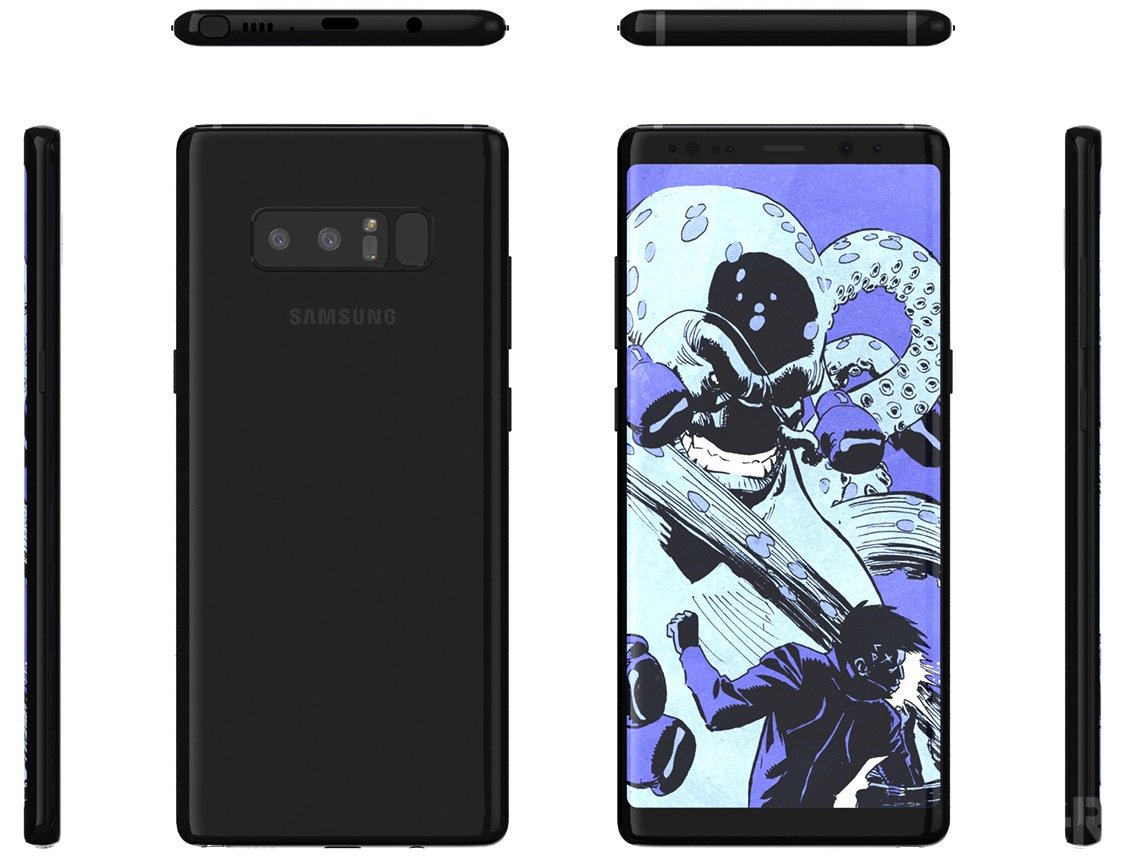 The new renders seem to have given a complete and exclusive look at the core features of this new phablet from Samsung, and it is quite fascinating that the upcoming flagship from the brand is going to be bigger and better than its dead forerunner. Earlier, a case maker named as Olixar leaked the design of the Note 8 and most of us thought that it is done. But to everyone’s surprise, another case maker, titled as Nillkin has recently published a cluster of new renders of its Note8 case, and they are completely mind-blogging.

The renders exhibit the top bezel of the Phablet to be much larger, and with a curved design, it looks super-stunning. The Phablet features Samsung’s Infinite Display design which hints that the screen’s side edges will be bowed, suggesting the bezel of the screen will completely be eliminated from the frame. But surprisingly, the case will still be there. However, the top and bottom bezels of Note 8 will get smaller in size, and the fingerprint reader is spotted to sit on the rear of the device.

Likewise, the Android keys are detected to be stationed on the screen; the iris scanner is expected to sit on the top of the display. According to the reports of some earlier leaks and well-sourced gossips, Samsung’s upcoming Galaxy Note 8 will boast complete cutting-edge specifications that anyone can expect from a 2017 high-end flagship Phablet. As the reports highlighted, the best-in-class features of Note 8 will include a 6.3-inch Super AMOLED display clubbed with 18.5:9 aspect ratio. Regarding storage space, the phone will be equipped with 6GB of RAM and variants of 64GB and 128GB ROM.

Similarly, under the hood, it is expected to be powered by Exynos 8895 or Qualcomm Snapdragon 835 chipset depending on locations, while a dual camera set-up of 12-megapixel rear cameras is confirmed to arrive. Backed by a Non-removable 3,300 mAh battery and an updated S Pen stylus, Galaxy S8 will run on Android 7.1 (Nougat). If you go by features and specs, there is no doubt that Samsung Galaxy Note 8 is going to be one of the hottest and trendiest smartphones of the year.

Though the exclusive renders of the handset have already given us the best-yet glimpse of Samsung’s best-ever Phablet, the accurate details and features about the Phablet are yet to be officially confirmed.