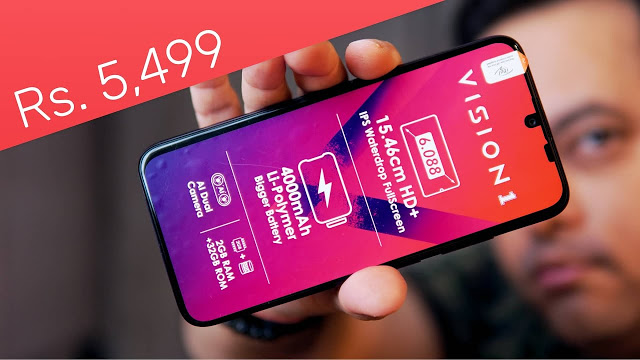 There is a new budget smartphone in town – the Vision 1 priced just INR 5,499. For that much of your hard earned money, what you get is 6.08-inch of IPS HD+ display having a resolution of 1560 x 720 pixels. The 2.5D curved display also features a water-drop notch at the top for the front cam.

The other biggest USP of the phone is its 4000 mAh battery which should allow for more than a day of usage comfortably. The phone otherwise comes with an octa-core processor coupled to a 2 GB RAM and 32 GB of storage, the latter again being expandable to a max of 128 GB via external micro SD cards.

Moving over to the rear, the resemblance with the latest gen iPhone is unmistakable though of course that is only from a visual point of view. So, while there is a square raised housing for the camera lenses, there is two of those for Vision 1. That includes an 8 mp and 0.08 mp sensors together with the LED flash.

Then there also is a 5 mp front cam as well together with a LED flash as well for the clearest selfies even in the dark. The company is also claiming both the front and rear cams are backed by advanced AI based image enhancers to allow for the best and optimum shots each time.

As for the software, its Android 9 Pie that would be running the entire show. For those who aren’t aware, the Vision 1 comes from iTel which in turn is the smartphone brand from Chinese manufacturer Transsion. The company is also claiming having sold the most smartphones in the entry-level segment in India and is hoping to continue the successful run of the market with the new Vision 1 as well.