Samsung’s newest Galaxy S8 and Galaxy S8+ flagships have been massive hits, bagging the highest pre-orders than any other Galaxy phone. That said, multiple sources suggest the upcoming Galaxy Note 8 could be the ultimate smartphone from Samsung. Now, a new set of leaks shows what the device might look like when it officially launches.

Notably, the leaked images are in line with past rumors and leaks. Few key sources suggest that the Galaxy Note 8 will have its fingerprint scanner embedded into the display, and this appears to be true as the fingerprint scanner can’t be seen anywhere in the leaked images. Another notable feature shown by leaks suggests the inclusion of a dual-camera setup, a feature earlier rumored for the current Galaxy S8 and Galaxy S8+.

Samsung earlier planned to integrate the fingerprint scanner below the Galaxy S8’s screen. Though, it seems the company didn’t have enough time to fine-tune the technology for its current flagships. Also, early prototypes of the Galaxy S8+ had a dual-camera setup.

Though, multiple reports now suggest that Samsung has planned both these features on the upcoming Note 8. The latest set of leaked images seems to confirm that we might indeed see twin rears camera on the Galaxy S8, which would allow users to take up 2x zoom optical images. 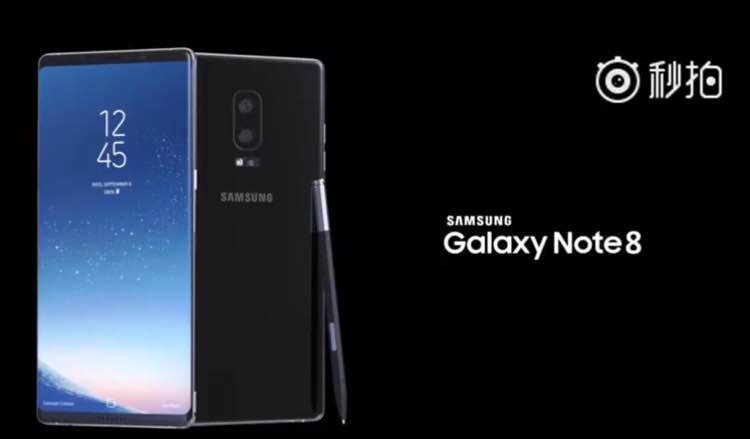 Furthermore, the leaked images also indicate that the Galaxy Note 8 will have a 6.3-inch display, making it the largest display ever seen on a Samsung phone. It’ll likely feature the same bezel free AMOLED screen with an aspect ratio of 18:5:9 found on the largest Galaxy S8+, which happens to be just an inch smaller than the rumored Galaxy Note 8 phablet.

As with any leak, users are advised to take this one with a pinch of salt as nothing is officially confirmed until the final product launches. But going by the latest reports and our key sources, the upcoming Galaxy Note 8 could be the ultimate smartphone users have been yearning for.

Samsung has certainly brought the excitement back in smartphones with the latest Galaxy S8 and Galaxy S8 Plus, and it appears the forthcoming Galaxy Note 8 could set benchmarks in smartphone design and technology.

More importantly, it could kill the hype surrounding the upcoming anniversary edition iPhone 8 aka iPhone X, as Samsung intends to release the Galaxy Note 8 around the same time as the iPhone 8.