Facebook has activated a new feature Safety Check for the people who are affected by the Nepal Earthquake on 25th April 2015. The Earthquake has been one of the most devastated natural calamities seen by the Himalayan kingdom. Two Earthquakes with their Epicenter in Nepal were recorded today. The tremors of this Earthquake have been felt in Nepal and North & Eastern part of India.

This feature aims to help the users of Facebook by providing them information if their loved ones & Friends are safe. The feature was announced by Mark Zuckerberg in a post soon after the calamity stroked. Mark has also given the URL of the app which can be accessed at: https://www.facebook.com/safetycheck/nepalearthquake 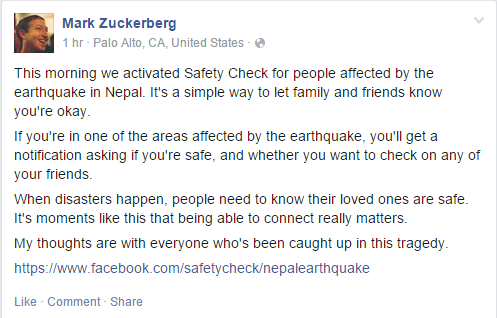 The feature works in a way that it picks the location of the user which he has given in the user profile. If a user is in the earthquake affected zone, an option is given to him to mark himself Safe.

The notification of this result is then posted to all the friends of the user and they would come to know that a user is safe.

The feature also let a user to mark any of his friend’s safe if the friend happens to be in the affected area.
This attempt by Facebook is noteworthy as the media could be treated not only a place to share pictures and jokes, real information could be passed on. The Social Media can be touted as a real fast providing network which can connect people in such a calamity.

Our prayers go for the people affected by this Natural calamity and we pray that the God give strength to the people who have suffered by this earthquake.