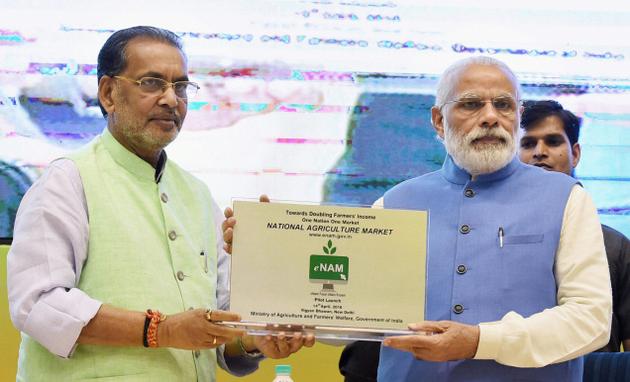 The National Agriculture Market, shortly called as eNAM, has been launched by Prime Minister Shree Narendra Modi at a function held in New Delhi on April 14. Set to connect 21 mandis or markets from eight states in the first phase, the e-platform initiative helps traders to sell their produce in India through an electronic trading platform. The government is planning to bring 585 mandis across India on to the platform by the end of March 2018.

Addressing a large gathering of officials and farmers from the participating states, Narendra Modi said National Agriculture Market will usher in transparency which will greatly benefit the farmers.

Modi revealed that the initiative is a turning point for the agriculture community and stressed the need to look at the growing agriculture sector holistically to enable farmers to reap full benefits of their produce. Moreover, PM Modi explained to the farmers about the various key initiatives that have been taken including the steps required to raise agricultural incomes.

As part of the eNAM program, farmers can showcase their products online from their nearest market and traders can quote the price from anywhere. The main aim of the program is to bring increased number of traders resulting in greater competition. Furthermore, the program ensures open price discovery and better returns to farmers.

Commenting on the trading platform prior to the launch event, Agriculture Minister Radha Mohan Singh revealed that the e-platform helps farmers to sell their produce at the nearest mandi without depending upon middlemen.

He stated that at present farmers are forced to sell at a price quoted by traders who suppress prices by forming cartels and the platform will improve transparency and provide farmers with wider choice and better prices.

Singh, meanwhile, disclosed that currently 14 states have amended their Agricultural Produce Market Committee (APMC) Acts in such a way to allow electronic trading. Few states like Tamil Nadu, Kerala are a hard nut to crack since they don’t have an APMC Act. Punjab has not agreed to the scheme in principle, the minister said.

As of writing this, Gujarat, Telangana, Rajasthan, Madhya Pradesh, Uttar Pradesh, Haryana, Jharkhand and Himachal Pradesh will be part of the platform. The platform will initially launch by trading in 25 crops, which includes wheat, maize, pulses, oilseeds, potatoes, onions and spices.