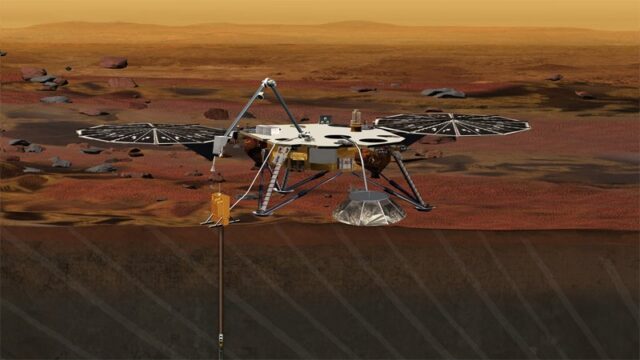 NASA, in one of the recently given statement, has confirmed the primary target of its future InSight rover, which is scheduled to take off in 2018 on a mission to explore Mars and its early geological evolution. As per the modified plan of the agency, InSight Mission, apart from studying and exploring Mars and its early-life geological evolution, will also explore the deep interior of the planet.

InSight which was originally slated to take wings in March 2016, now is expected be launched after May 8, 2018. As NASA planned, the mission will go away from the California-based Vandenberg Air Force Base and will land on the Martian surface after October 2018. In addition to this announcement, the agency also declared on Monday that, the designing and development of the Lander is finished, and the targeted instruments also have been installed onto the Lander so that the final testing of the spacecraft including the testing of device deployments, acoustics, and thermal balance modules will be completed on time.

Shedding new lights on InSight’s new objective, Bruce Banerdt, the Chief Investigator of NASA’s Jet Propulsion Laboratory, Pasadena, California, said that examining the interior of the Red Planet will boost our understanding of how the Red Planet was formed alongside other crucial details. The internal compositions of Mars are better conserved in contrast to Earth since last three billion years and thus, exploring Mars’ internal structure is more likely to reveal several key points about the evolution of the universe, the planets, and those prehistoric happenings which have kept baffling all of us.”

As NASA in its latest declaration highlighted, InSight will take a deep dive into the interior surface of Mars and will push two advanced instruments below the surface for ferrying the information back to earth from the depths of Red Planet. During its mission, InSight push two instruments to approximately three to five meters (10 to 16 feet) deep into the Martian underground for understanding the interior of the planet more deeply.

The two major instruments the InSight will be equipped of include a seismometer and a heat probe. The seismometer is designed by France’s space agency, CNES, alongside the space agencies from the United States, Switzerland, the United Kingdom, and Germany and will be employed for detecting the subtle movements of the planet under the Martian ground. Like NASA, the device is sensitive enough to even track the activities of a hydrogen atom on the Martian surface. As believed by scientists, the instrument will check the meteor impacts, took place in the early days of Mars. Likewise, the second major equipment will be a heat probe which will calculate the quantity of force degenerate by the Martian interiors in the form of heat. The device is designed by German Aerospace Center and is capable of hammering itself to a depth of 10 feet (3 meters).

Most of the rovers, orbiters, and Landers, launched to Mars over the past two decades mostly emphasized on exploring the surface of the Red Planet including the features like rocks, craters, regolith (soil), and volcanoes. But InSight will be the first one to go deep into Martian surface and examine something which no other spacecraft yet have done!