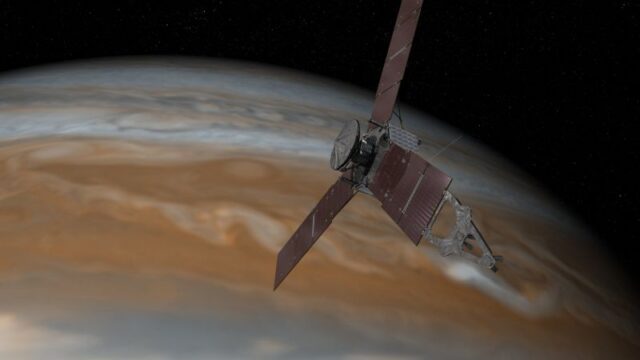 A group of scientists at National Aeronautics and Space Administration (NASA), Jet Propulsion Lab in Pasadena have done the unbelievable by creating a spacecraft that have finally entered the orbit of Jupiter. NASA’s Juno Spacecraft have traveled for 1.8bn miles for five years to enter the elliptical orbit after burning for 35 minutes.

Official confirmation has come from NASA that the burn was successful at 11:53 PM ET, where the spacecraft in its 53-day orbit will try to discover the hidden secrets of the largest planet.

The $1.1 billion mission will probe the secrets of the solar system and the seven science instrument on board will study the origin, atmosphere, structure and magnetosphere of the gaseous planet. In this mission, Juno will circle Jupiter 37 times over 20 months. It will dive down to 2,600 miles above the dense clouds of the planet.

It is not the first of its kind mission as spacecraft has been to Jupiter before but in this mission Juno will try to get as near as it can to the most massive planet in our solar system. Currently, the spacecraft is running on battery power and will fire the main engine only after it enters the orbit.

As of now, the spacecraft is at it elliptical orbit which will take around 53 days to complete and will avoid the intense radiation belts and debris fields. After the completion, it will try to get near to the planet again. The spacecraft will orbit the poles and to protect it against the radiation scientists have used shielded electronics vault.

The spacecraft which was launched five years ago from Cape Canaveral will give close up photos and details of the planet to scientists so that they can figure out how the existence of the largest planet came four billion years ago.

Commenting on this development Scott Bolton, NASA’s Principal Investigator for this mission said –

This is one of the hardest things that NASA has undertaken, and we just made it possible. In this mission, we will learn about Jupiter history and its formation.

The spacecraft will send the first close-up image of Jupiter on August 27; it will also be the day that the instrument on Juno will be turned off for a test run. After finding out all the details that it can about the planet, Juno will end its mission by crashing into Jupiter on February 20, 2018.