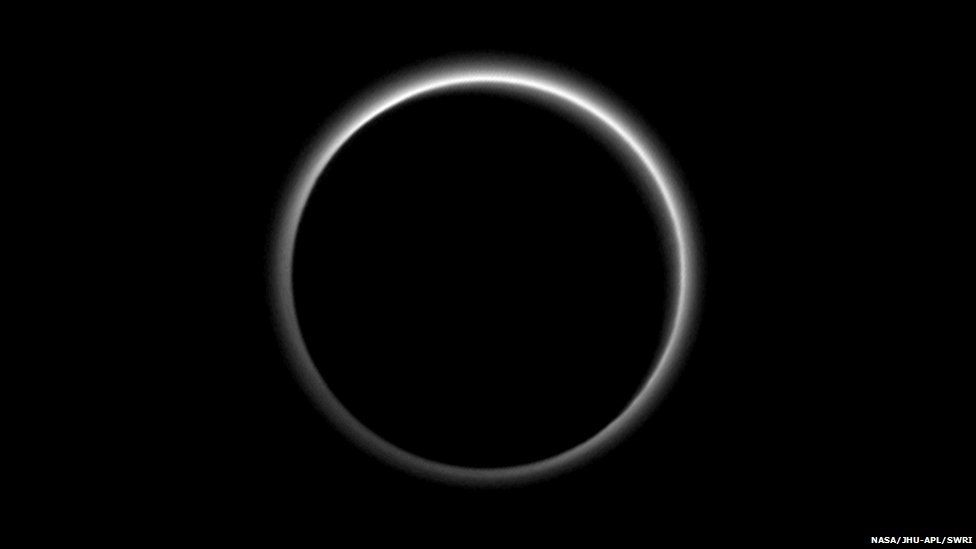 NASA has released a spectacular photo showing the silhouette of the dwarf planet Pluto being backlit by the sun. The New Horizons spacecraft took the image on July 15, one day after it passed over Pluto on a mission that began over nine years ago.

At the time of the photo, New Horizons was 1.25 million miles from Pluto and used its LORRI (Long Range Reconnaissance Imager) to snap the photograph. New Horizons has taken a slew of photographs of Pluto over the past two months, as it made its approach to the dwarf planet, but few have been as amazing as the most recent picture of the sun backlighting Pluto.

In a press release, New Horizons lead investigator – Alern Stern said, “My jaw was on the ground when I saw this first image of an alien atmosphere in the Kuiper Belt,” adding, “It reminds us that exploration brings us more than just incredible discoveries–it brings incredible beauty.”

New Horizons was also able to detect layers of haze stretching 100 miles into the atmosphere of the dwarf planet, which was much higher than scientists had anticipated and could explain Pluto’s reddish color. The sun being in a position to silhouette Pluto allowed scientists to measure the atmosphere of the dwarf planet by studying the scattered sunlight.

Some of the images taken by New Horizons also show evidence of flowing methane ice and hydrocarbons on Pluto’s surface. Water ice is incapable of flowing on Pluto due to temperatures that are roughly 380 degrees below 0 degree Fahrenheit. But other types of ice can flow much like Earth’s glaciers, supporting previous theories of an underground ocean beneath Pluto’s crust.

There are still large amounts of data onboard New Horizons that NASA says will be obtained over the next year, keeping new information about Pluto coming throughout the rest of the year and well into 2016. New data will be slow to come for the immediate future, but starting in mid-September, Stern says, “The sky will be raining presents with data from the Pluto system,” including, we hope, more spectacular photographs.