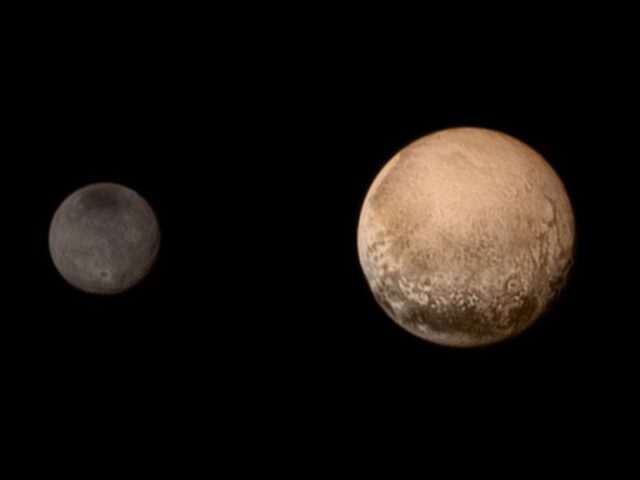 National Aeronautics and Space Administration (NASA) in January 2006 launched its $700 million New Horizons mission which traveled for more than 3 billion miles to get close up photos of the treacherous planet Pluto. The team of scientists has collected 100 photos and made it in a video for the public.

After traveling for around ten years, the spacecraft New Horizon made a close contact with the dwarf planet on 14th July 2015 to give scientists around the world their first close-up photos of the distant planet. Even though the speed of the rocket was more than 30,000 mph but the close-up photos clicked by the spacecraft are some of the best as it gives a clear picture of the planet and the moon.

So NASA celebrated the one year journey of the spacecraft around Pluto by releasing a dramatic video comprising of all the close-up photos of the planet. The one thing that stands out in the video is that it lets you enjoy and go through the exciting process of landing on the distant planet without leaving the comfort of your home.

The video starts with Pluto and its moon Charon and then eventually the spacecraft gets closer on an icy plain on the surface of Pluto known as Sputnik Planum. Also, New Horizon came as close as to 7,800 miles of the dwarf planet’s surface.

Talking about this latest development in a press conference, Alan Stern’s the principal scientists of the new Horizon said

Through this video one will get the thrill of how it feels like to travel on a spacecraft and land on Pluto. It will give the feel of as if you were approaching some future landing.

The fact remains that New Horizon did not land on Pluto, but gave detail to scientists about some of the hidden facts about the distant planet. Some of its discoveries were that the biggest moon of the planet Charon has an internal freezing ocean. While the most striking finding was the blue edge of the Pluto, which extends to more than 200 km above the surface of the planet.

For now, through this video, we can get the feel of holding on to our seats tightly because we will surely be looking for a bumpy landing on the frozen surface. Attached below is the video released by NASA: