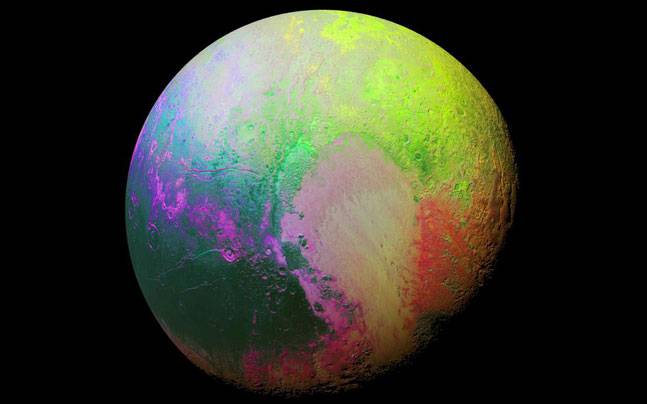 NASA has released some of the sharpest images of the dwarf planet Pluto. It gives a clear picture of the mysterious landscape of the Pluto. The latest sharp images of Pluto reveals a mystifying array of surface features that have scientists stupefied because of their range and complexity.

These pictures are a section of a series of pictures that was taken by spacecraft New Horizon’s closest rendezvous with Pluto on July 14. The pictures have a resolution of 250-280 feet per pixel resolution and reveal the features of a section of the Pluto landscape no bigger than a city block. The lower resolution color pictures were then added to this image to create a new image.

These images form a strip that is 80 kilometers wide and represent the edge of the northwest of the structure named as Sputnik Planum across the Al-idrisi mountains on the borders of the feature jutting into the icy plains. These pictures were taken by the Long Range Reconnaissance Imager (LORRI) on the New Horizons spacecraft. .

The latest pictures reveal dunes made of unknown composition, nitrogen ice flows that could have oozed out of the mountains into the plains forming a network of valleys which could have been carved from the material flowing over the Pluto’s surface.

New Horizons Cheif Investigator, Alan Stern from Southwest Research Institute (SwRI), Boulder, Colorado said that the dwarf planet reveals a variety of landforms and complexity of features that rival anything was seen in the solar system.

New Horizons made its closest approach to the dwarf planet in July. The volume of data is so large, the distance from ground stations is so big, it will take almost a year for all the data to reach us.