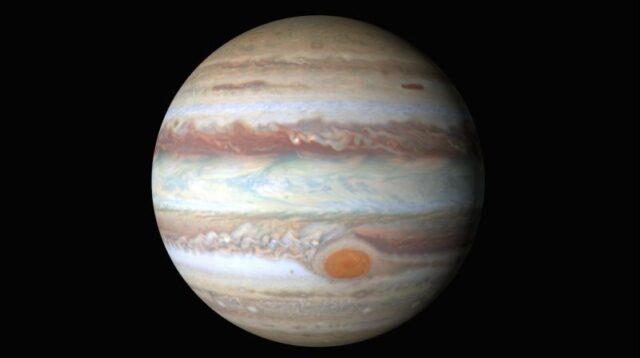 NASA has released a stunning picture of the “Great Red Spot” taken by the Juno Spacecraft. Jupiter is the largest member of the Solar System. One particular feature of the red giant is the “Great Red Spot” which is a gigantic storm which has been blowing on the planet for more than three centuries and was also observed first by the great Galileo. The spot measures 25,000 miles from end to end. The mega storm has been going on for centuries and is larger than the size of Earth. The picture also three smaller storms which are blowing in the Southern Hemispheres and has been christened “String of Pearls.”

The image was created by citizen scientist Roman Tkachenko after processing raw data which was obtained by the JunoCam on the Juno spacecraft. The pictures were taken by the spacecraft while orbiting the planet. The pictures are available for the public. However, the cam was not considered a scientific instrument and was aboard as a means to show something to the common public who are not much used to the complex world of space exploration.

The Juno aircraft was still some 285,100 miles from the Jovian surface when the data was collected. This can give you an idea of the vastness of the planet. The closest which Juno could go was 3100 miles.

Jupiter is the fifth member of the solar system and is the largest member of the solar system. Its volume is a thousand times more than Earth. We are lucky to have a massive member up close to the Earth since it acts as a vacuum cleaner and sucks dangerous asteroids and space rocks and remove it away from harm’s way. In July 1992 a comet Shoemaker-Levy 9 also designated as D/1993 F2 broke apart and in 1994 collided with Jupiter. The collision once again highlighted the role of the planet in clearing space debris.