NASA’s Juno mission to Jupiter has broken the record today to become mankind’s most distant solar-powered spacecraft. The milestone occurred, when the probe was about 793 million kilometers (493 million miles) from the sun at 11:00 a.m. PST (2:00 p.m. EST) on 13 January 2016.

The previous record-holder was the European Space Agency’s Rosetta spacecraft, whose orbit peaked out at the 792-million-kilometre mark in October 2012 when it neared comet 67P/Churyumov-Gerasimenko.

Launched in 2011, Juno was launched by NASA to the planet Jupiter to peek beyond its clouds and unravel its secrets. In fact, the genesis of the name Juno also hints to the fact about how Jupiter shrouded itself in clouds to hide its mischief but his wife goddess Juno was able to look through the maze of clouds and see his true nature.

Juno will straddle the gaseous giant in a polar orbit and will study the planets’ composition, gravity field, magnetic field and polar magnetosphere.

Juno weighs four tons and has 9 meter long solar arrays and on earth produced 14 kilowatts of energy. However, the huge distance of Jupiter from the sun means the spacecraft solar panels will be generating 500 watts of power. However, this will suffice since the spacecraft is very efficiently designed. 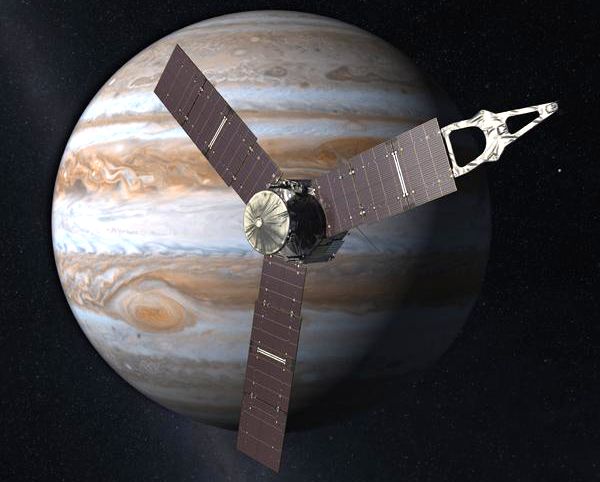 The previous spacecraft that visited the gas giants like Jupiter and Saturn were all nuclear powered. It obtained its energy from the nuclear cell that utilized the slow decay of radioactive compounds to generate electricity.

Eight spacecraft have crossed the cold, harsh, dark realities of deep space as far out as Jupiter. Juno will reach Jupiter on July 4 this year. Over the next year, the probe will orbit the Jovian world 33 times, skimming to within 5,000 kilometers above the Jupiter’s cloud tops every 14 days.