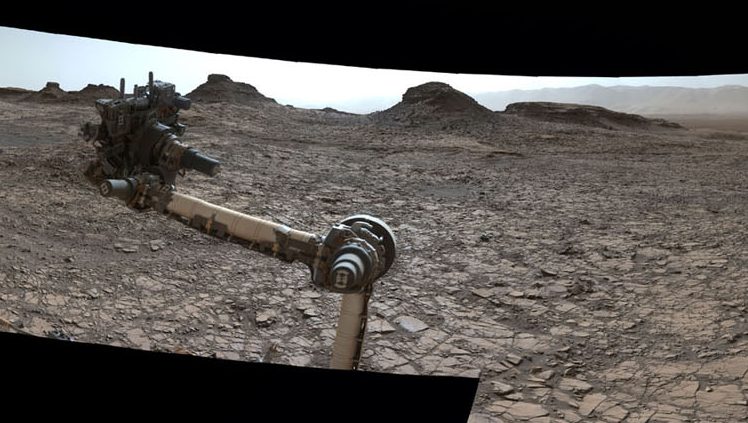 NASA: The rover scavenging Mars looking for the signs of life has captured a spectacular panorama of the Planet’s terrain. The photograph shows the Earth-like appearance of the red planet’s surface. With similar flat ground with eroded landforms, the place in the image looks surprisingly similar to some regions on our own Planet. NASA’s Curiosity shot multiple photos using its Mast Camera (MastCam) at the location. More than 130 images were stitched together and perfectly synchronized and blended to result in an outstanding 360 degrees’ view of the place. The photos were taken on 5th this month, which is also the fourth anniversary of the rover’s landing on Mars.

Buttes and Mesas across Murray Formation

In the photograph, we can see the flat Murray formation which is a remnant of the mud deposits of some lakebed. A number of buttes and mesas are placed across the landscape. A Mesa is a plateau-like formation with steep sides and a flat top, but just a lot smaller than a plateau, while a butt is even smaller.

The landforms are the eroded remains of some prehistoric sandstone that developed by wind activity. Comparatively erosion resistant materials cover the tops of the buttes and mesas at the Murray Buttes. The color of the photograph has been artificially modified to simulate the appearance of the landscape here on Earth.

The Curiosity rover of NASA is investigating the geology and climate of the red planet to determine of it had the ideal condition to support at some point in time. The rover was put inside the Gale crater of Mars and currently it is exploring the slope hills of Mount Sharp. NASA hopes to find some information for any microbial sign of life in the planet. The space agency also has the intention to find the reason behind the current condition of our neighboring planet after it got proofs confirming the presence of abundant water at some of the point of time there.