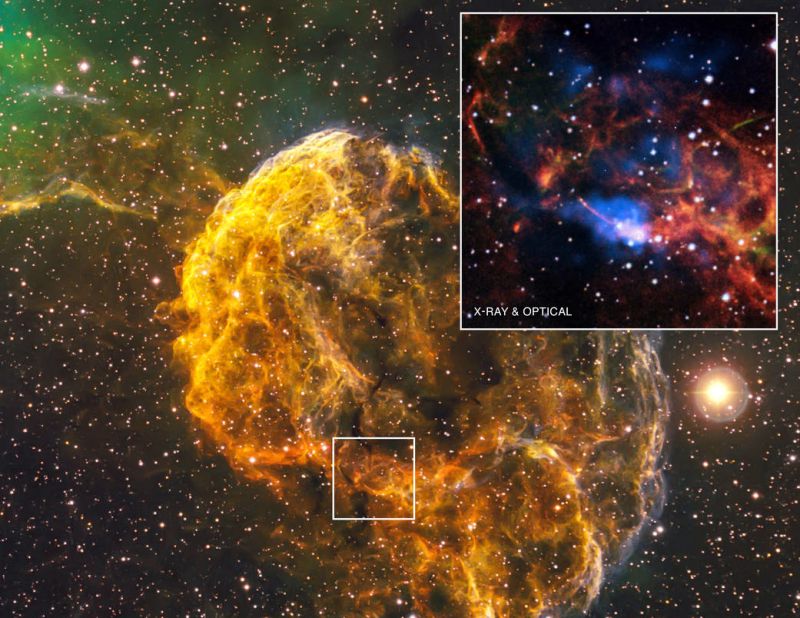 Using NASA’s Chandra X-ray Observatory, astronomers have come across a colorful nebula named officially as IC 443. It is the remnants of a supernova explosion. The nebula is located in the constellation Gemini at a distance of 5,000 light years from Earth.

As per a release by NASA, the latest observations of the Jellyfish Nebula hints that explosion could have been caused by a peculiar object that can be observed on the southern edge of the remains of the supernova, called CXOU J061705.3+222127, or J0617 for short and seems like a rapidly spinning neutron star, or pulsar.

When a massive star much bigger than our Sun runs out of its nuclear fuel, it collapses and forms a dense stellar core and becomes a neutron star. The outer layers of the neutron star eject outwards in a massive and spectacular explosion known as a supernova explosion.

The spinning neutron star starts producing a beam of radiation much like a beacon and is known as a pulsar. It can be detected by as pulses of radio waves or other types of radiation.

Another scientist is, however, skeptical about the latest estimate of the age of the supernova and hints b that it could be as young as 3000 years.

The Chandra program is managed by NASA’s Marshall Space Flight Center in Huntsville, Alabama and the Smithsonian Astrophysical Observatory in Cambridge, Massachusetts, carry out Chandra’s science and flight operations.