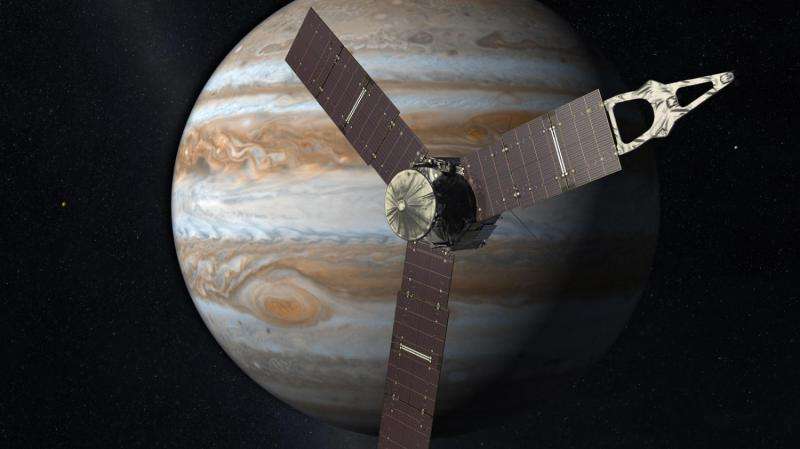 NASA Solar-Powered Juno spacecraft en-route to Jupiter has successfully executed a maneuver to adjust its flight path and it is now set to make its rendezvous with the red gas giant, the solar system’s largest planet.

Juno was blasted off from Cape Canaveral Air Force Station on 5 August 2011, and will reach its destination on July 4, 2016. It will orbit the Red Giant in a polar orbit and will study the planet’s composition, gravity field, magnetic field and also the polar magnetosphere.

The spacecraft will also seek answers to questions which have puzzled astronomers –If the gas giant has a rocky core, if there is water in its atmosphere, distribution of its mass and also the nature of its winds which could reach 384 mph.

Juno spacecraft is unique because it is powered by solar arrays which are commonly seen in satellites which orbit the Earth. Most spacecraft for deep space exploration are usually powered by an atomic pile or the radioisotope thermoelectric generators.

Juno has three solar array wings, and it will not only generate power, but it will also help to stabilize the spacecraft.

Scott Bolton, Juno principal investigator, working with Southwest Research Institute in San Antonio, the US informed that this is the first of two such maneuvers which adjust the spacecraft’s orbit around the Sun and will fine tune its rendezvous with the giant gas sometime in July this year.

The next firing of the thrusters has been scheduled for 31 May this year.
The spacecraft when parked in its polar orbit will orbit the Gas Giant 33 times and will be as close as 5000 kilometers from the Jovian cloud surface every 14 days.