The mysterious, monstrous, pitch black exoplanet that reflects no light 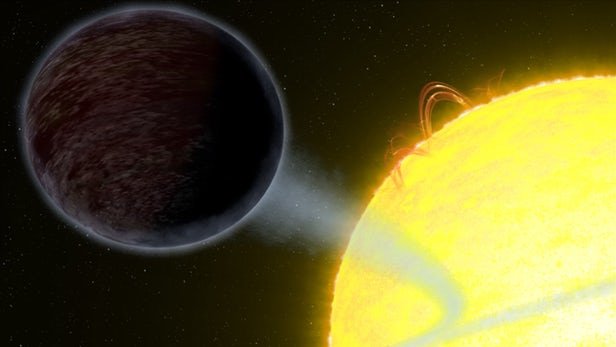 Astronomers have discovered that the exoplanet WASP-12b does not reflect any light. The recent study has revealed that the mysterious hot Gas Giant WASP-12b is a completely pitch-black, light eating exoplanet. The monstrous exoplanet has a unique ability to absorb or engulfing all the light that strikes its surface thus making it look like a fresh asphalt.

WASP-12b was discovered by scientists in the year 2008. It orbits around a sun-like giant star called WASP-12A which is situated at a distance of 1,400 light years from Earth. The giant exoplanet is almost twice the size of Jupiter and revolves very close to its parent star (2 million miles away). This mysterious exoplanet belongs to a particular class of planets known as ‘hot Jupiters’ depicting its resemblance to our gas giant neighbor Jupiter. But, unlike Jupiter, WASP-12b revolves very close its parent star. It has very high atmospheric temperature and reaches almost 2,600 degrees Celsius during the daytime.

The amount of light that a planet reflects is called as its albedo, and the scientists have found out that the monstrous, hot exoplanets have surprisingly a very low albedo. The WASP-12b exoplanet’s albedo is measured to be only 0.064 which means that it reflects only 6% of the total light that strikes the surface. This discovery signified that the WASP-12b is one of the darkest exoplanets in the Universe. But the crown of the darkest ‘hot Jupiter’ is given to TrES-2b, which was detected in 2011 and is believed to reflect only 1 percent of the light that hits it.

The lead author of the study, Taylor Bell informed that although there are many exoplanets or hot Jupiters which reflect very less light and are remarkably dark, they are cooler than WASP-12b. And for those cool planets, the presence of clouds and alkali metals help them absorb more and more light, but that is not the case in WASP-12b which is very hot.

This massive light eating capability of such a hot exoplanet has astonished the scientists. They believe that the very high temperature inside WASP-12 would have resulted in its low albedo because there is no chance of hot cloud formation and also its extremely hot temperature would have broken the hydrogen molecule into atomic hydrogen which makes its atmosphere equivalent to a low mass star. Thus, it reflects back very less light.