We saw foldable displays a few years back and since then industry started looking at a possible use case for them in foldable smartphones. We saw the Royale Flex, Samsung Galaxy Fold, which looked cool but didn’t really serve a purpose with their fragile displays.

Following this, more and more brands jumped on the foldable phone bandwagon and Motorola is one of them. Their implementation is based on perhaps the most recognizable Motorola that the company put out, the ‘Moto Razr’. Back in the day, they were one of the coolest phones you could get.

In its new avatar, the phone comes with a foldable display with the same clamshell design and we got to spend some time with it. So should you get one? Let’s find out in our review.

Before starting with the Moto Razr review, let’s have a glance at the phone’s specifications, pricing and things we get with the device. 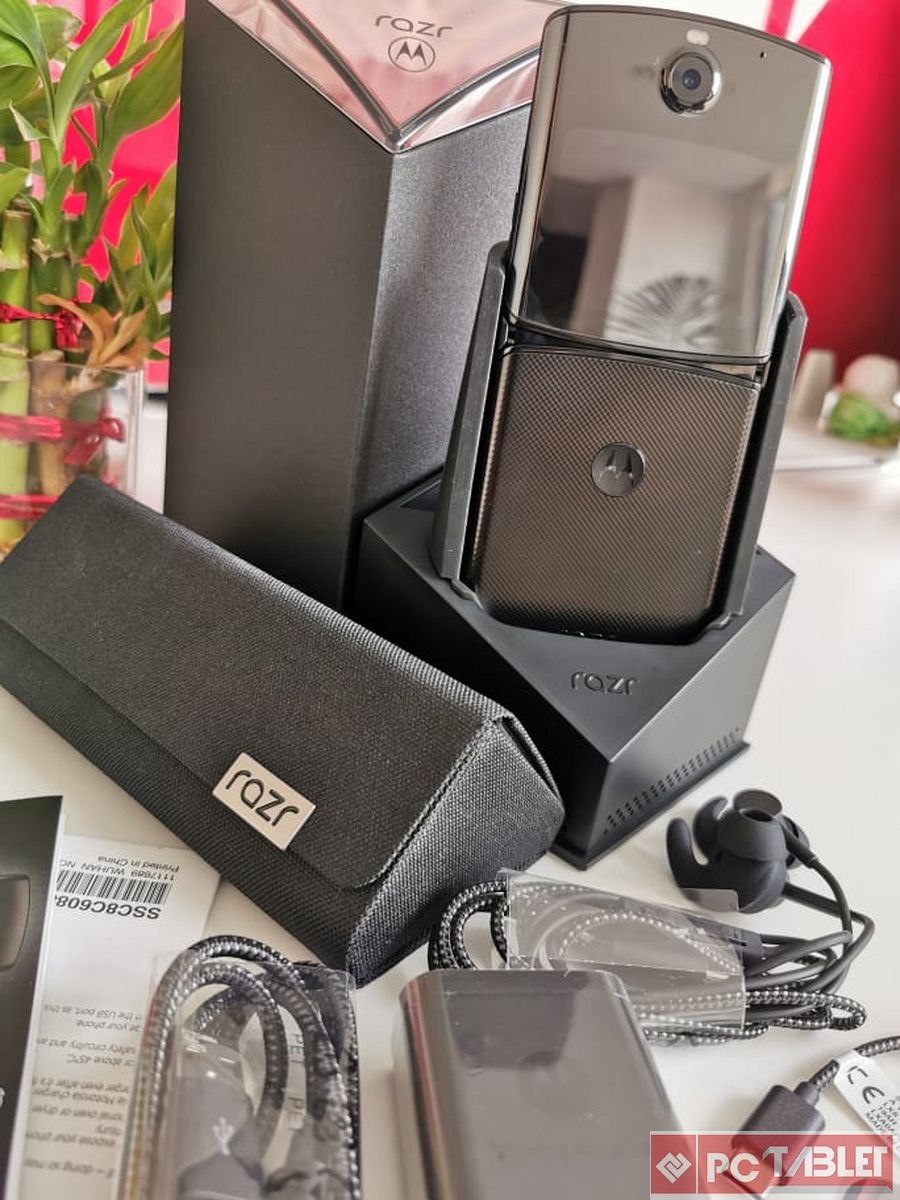 You get the smartphone in a fancy box, as you should considering the hefty price.

The Original Motorola Razr is still an iconic piece of tech that the 90’s crowd will surely remember. It was the model that started the flip-phone revolution and dominated it for the longest time. Now we have the Razr in a new avatar with a foldable display. 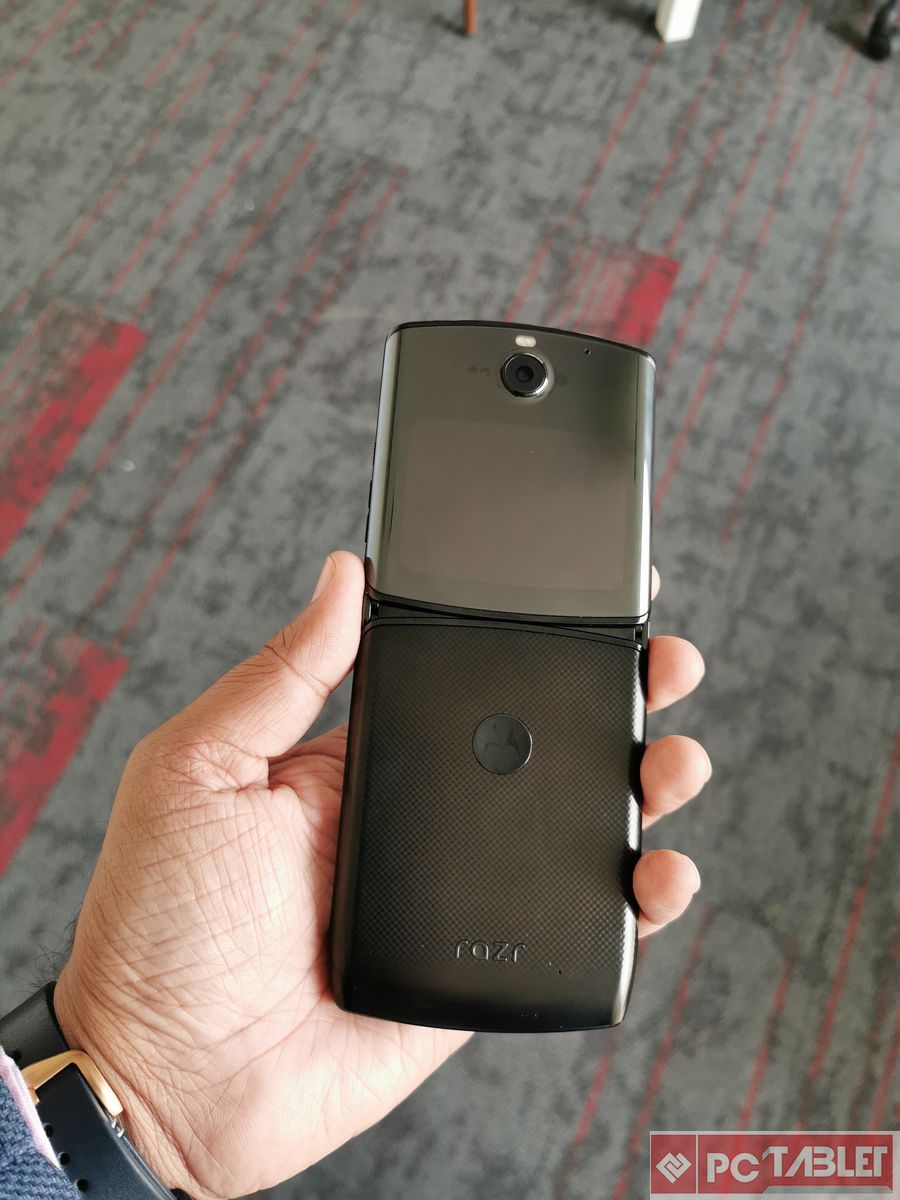 Motorola has done a great job keeping the resemblance while embracing the future. You get that satisfying flip action that the OG Razr was known for combined with the full-length foldable display. The construction is solid for the most part, during our limited use, we did not notice any squeaks or wobbles. The hinge is weighed and tucks the display in, during the closing moment, thus eliminating the crease in the middle. 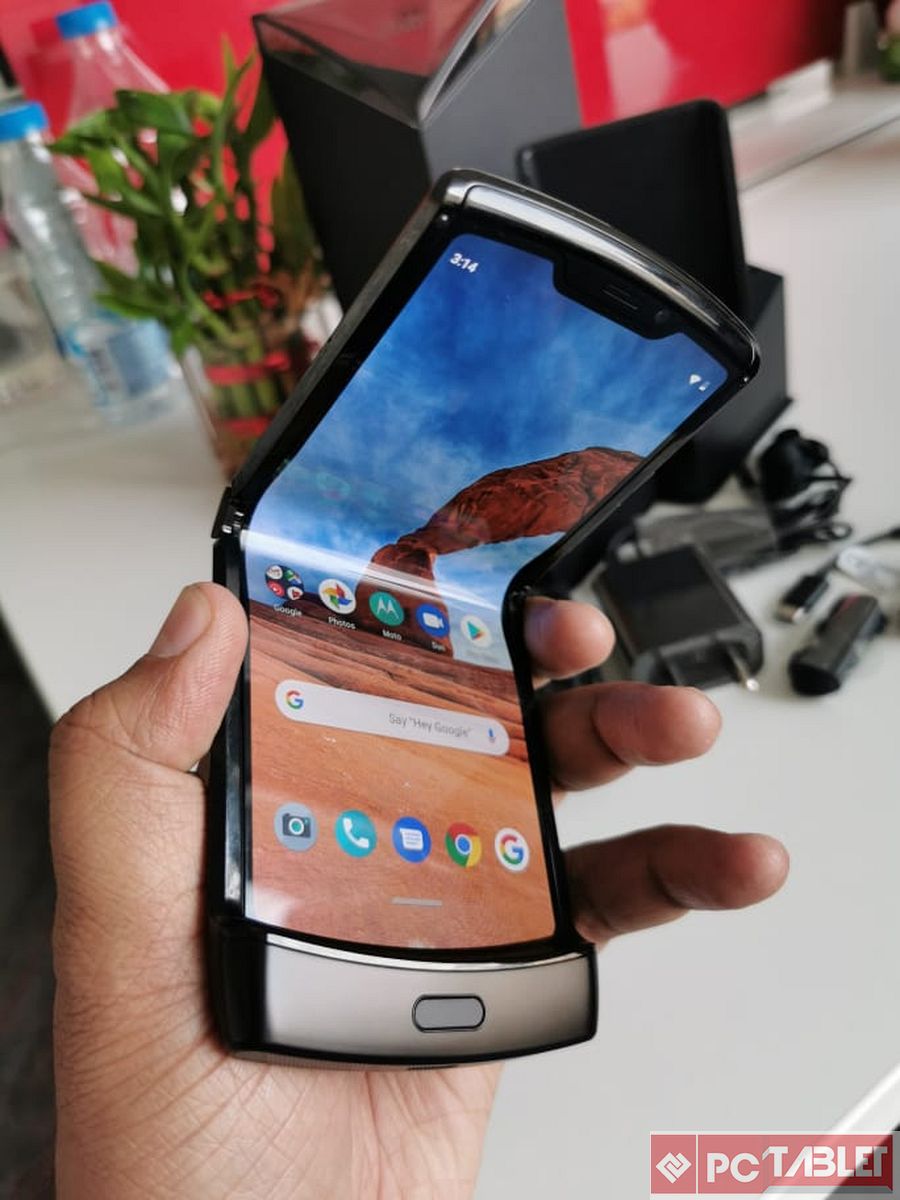 You get a chunky chin on the bottom that houses the fingerprint sensor, USB Type-C port, and the speaker grill. While the volume rockers and the power button are on the right side of the top half of the display. Motorola has added a secondary 2.7-inch OLED display to the phone, that displays the vital info. Flipping the phone open, lets you admire the 6.2-inch OLED foldable display, that is covered by a thin plastic layer, so you have to be extra careful while touching it. 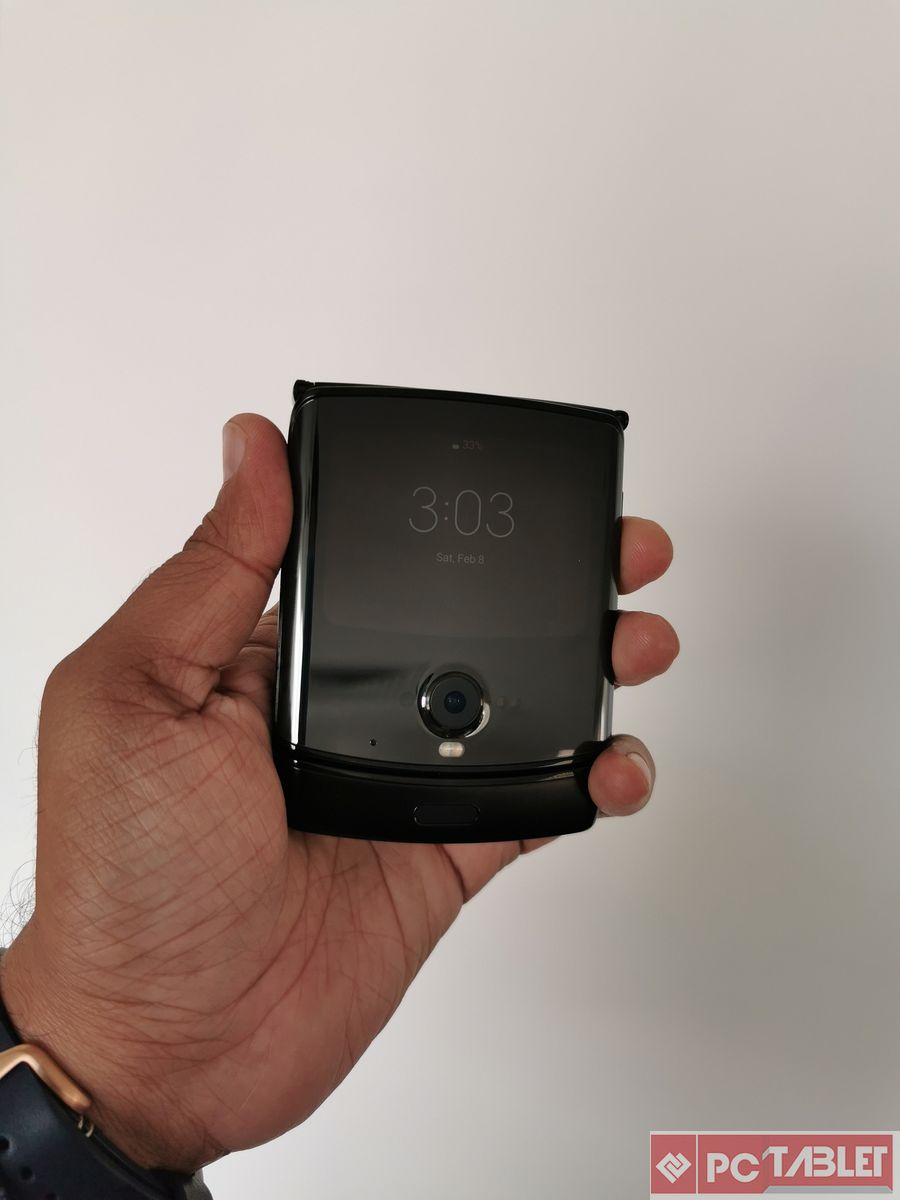 Our main concern is the gap between the display and the hinge, with dirt and particles pouring in and clogging the gears over time. Motorola has refined this when comparing the pre-production model that was shown off to the western media but this point has to be seen over prolonged use. But during our limited use, we did not encounter any of the above-stated issues and the phone felt sturdy enough to us. 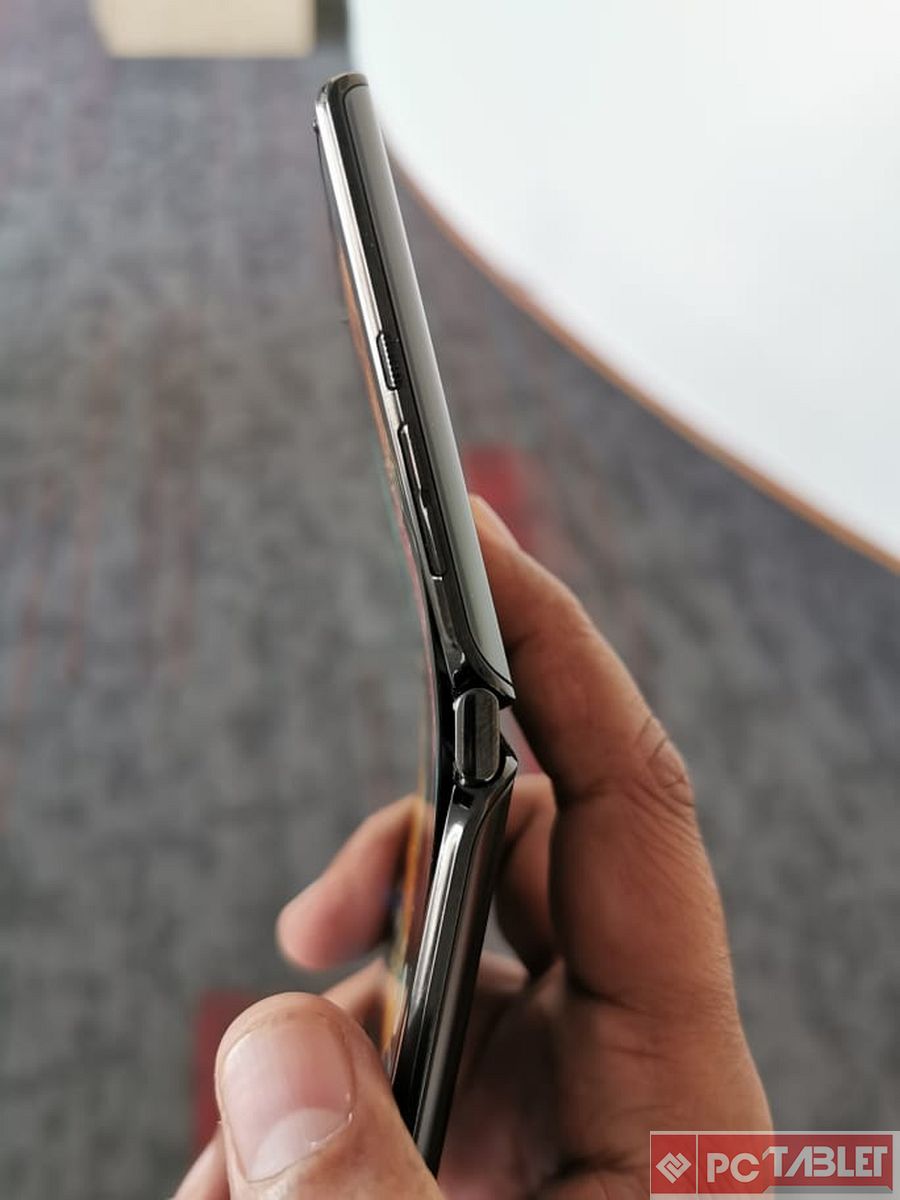 Motorola has split the battery into two halves, providing the phone with a weighted profile which is nifty in our opinion.

This is the attention-grabbing area of this smartphone. You get a 6.2-inch P-OLED display with an HD+ resolution. Unlike other foldable phones that have a crease in the display, some design wizardry has let Motorola bring one to the market. During our time with the phone, we did not notice any major imperfection barring a few kinks here and there.

There is also a smaller 2.7-inch G-OLED secondary display which provides quick glances when the phone is folded shut. This display is small but gets the job of checking notification or adjusting the toggles with ease. 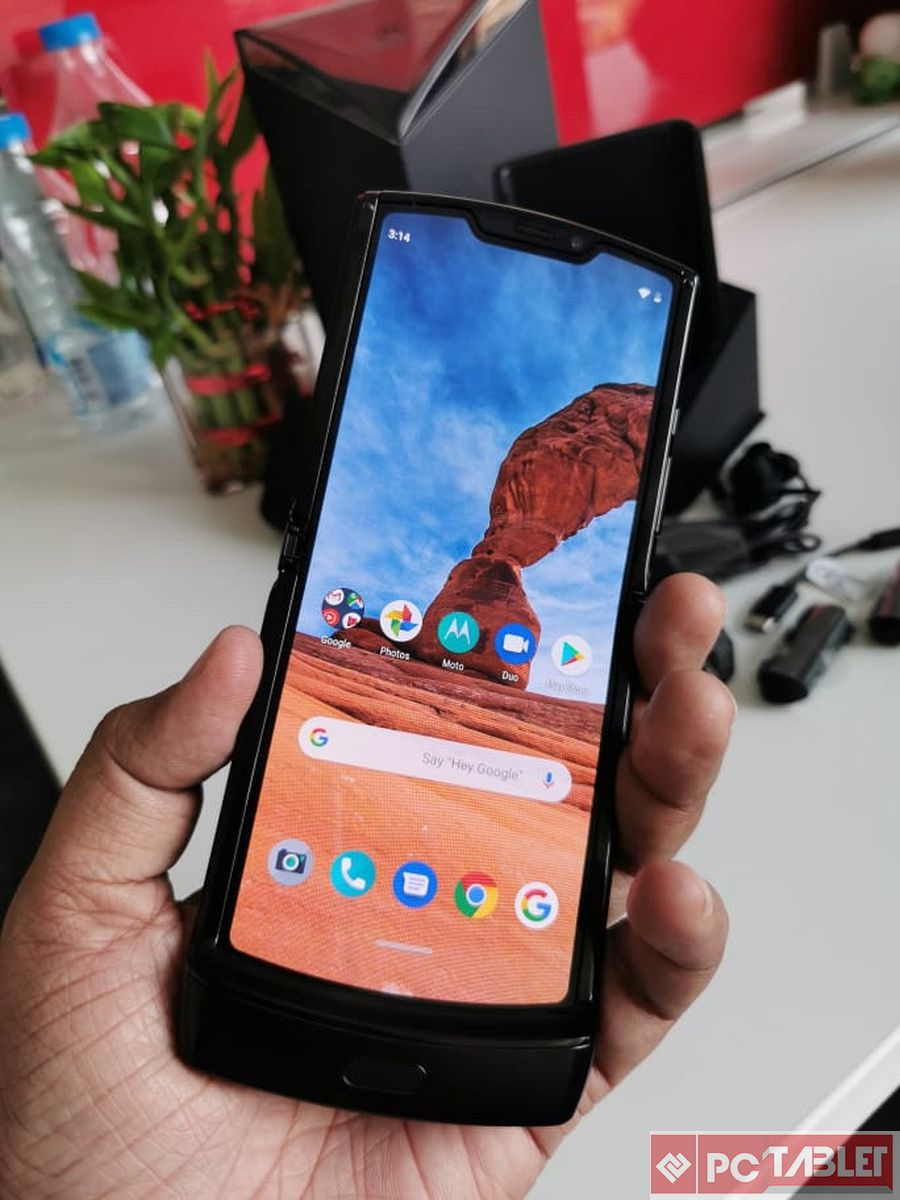 Coming back to the main display, it is crisp as you would expect from an OLED panel.  You get a notch up top and a chunky chin at the bottom. The black is inky, color reproduction is on point, to tweak it further, Motorola has added a display settings section. The only we have is with the peak brightness, the display is overall a bit less bright as opposed to a flat OLED panel and this is evident while using the phone outdoors. The oleophobic coating on the phone also makes weird rainbows when the light it at an angle.

The phone comes in just one RAM and storage option that is 6GB+128GB. Now, this might be sufficient for some but the lack of expandable storage is a bothersome for us personally. The phone comes powered by the Snapdragon 710 processor which is the weakest aspect of this smartphone. Coming in at a hefty INR 1.25 lacs price with mid-range specs is an instant mood killer. We would have liked the phone with the Snapdragon 730G SoC at least. 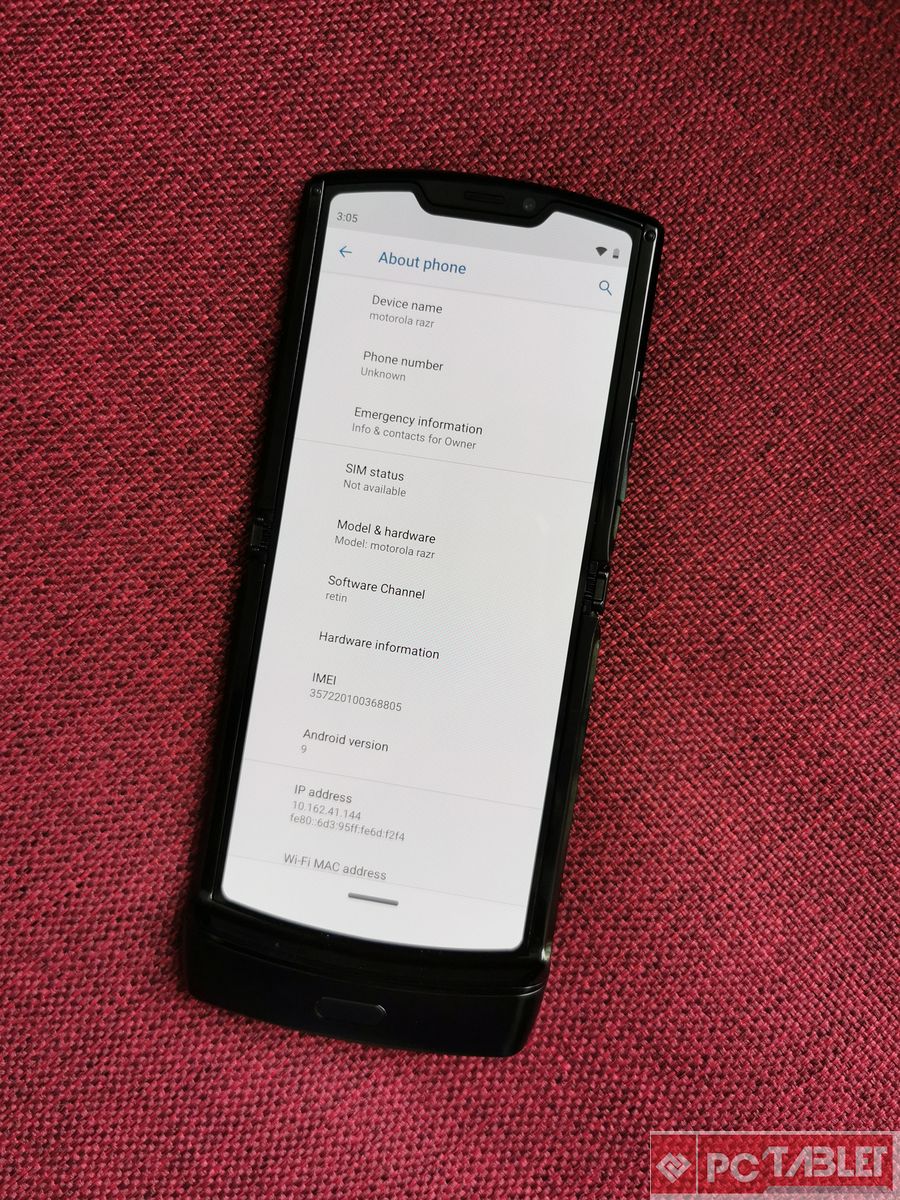 That being said, the phone performed as a mid-range would do. The helping point here is the near Vanilla Android build with the standard Motorola apps and services on top. You get a clean, intuitive interface without the need of worrying about bloatware, spammy notifications or ads.

Motorola has included Moto Actions, Moto Display and Moto Helo apps in the device. Thus, you can enjoy ambient display feature alongside super quick gestures such as a double-wrist twist to open the camera app, double-chop to turn on the flashlight, and do a three-finger tap to capture a screenshot.

Moving back to the performance, sailing through the UI was a breeze. App switching times could have been better with more powerful internals but seem to manageable in their current state. 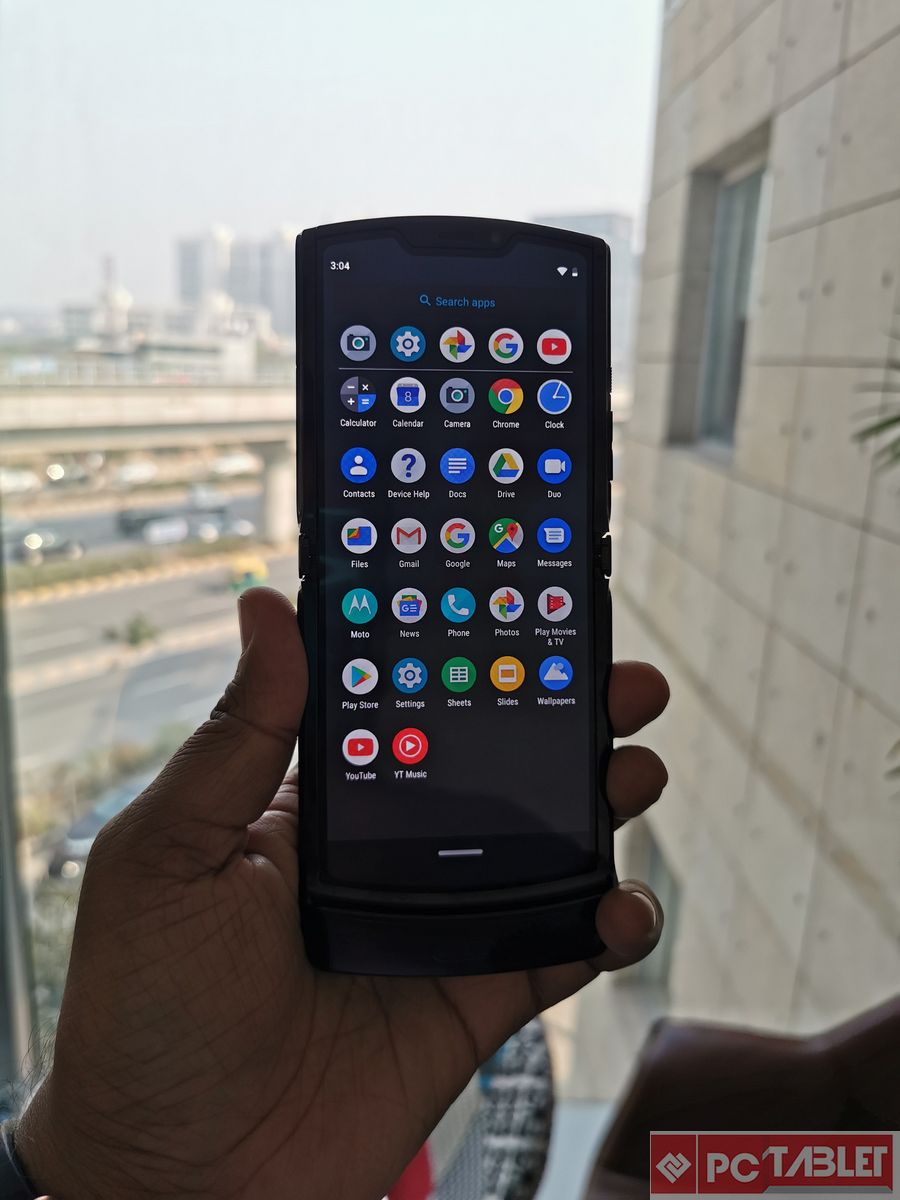 We did try gaming and basic apps did well, but we wouldn’t recommend this for games, because of the fragile display. One hard press could render a pixel dead further unleashing a chain of events.

We would be covering the cameras here as well since they are not that impressive and don’t really need a separate section. The main 16-megapixel f/1.7 does an above-average job in most scenarios. Daylight shots tend to be useful enough for sharing on social media with a light editing done to them. The camera app here is a standard one, found across Motorola’s entire smartphone lineup. There is a dedicated night mode, which we thought would pump out decent images but they are below average IRL.

Coming to the secondary 5-megapixel sensor used for taking selfies. This is the same performance-wise as that of the main sensor, it feels to us like Motorola devoted all their attention to that display assembly and lifting off other stuff from their mid-range smartphone.

The Motorola Razr comes with a rather smaller 2,510mAh cell which is a led down again. The OLED display does help conserve a bit of juice if you go using the usual dark wallpaper route. That being said, during our tests, the phone lasted just one working day with moderate use. This included a bit of social media, messaging, browsing and light gaming, apart from the usual calling. 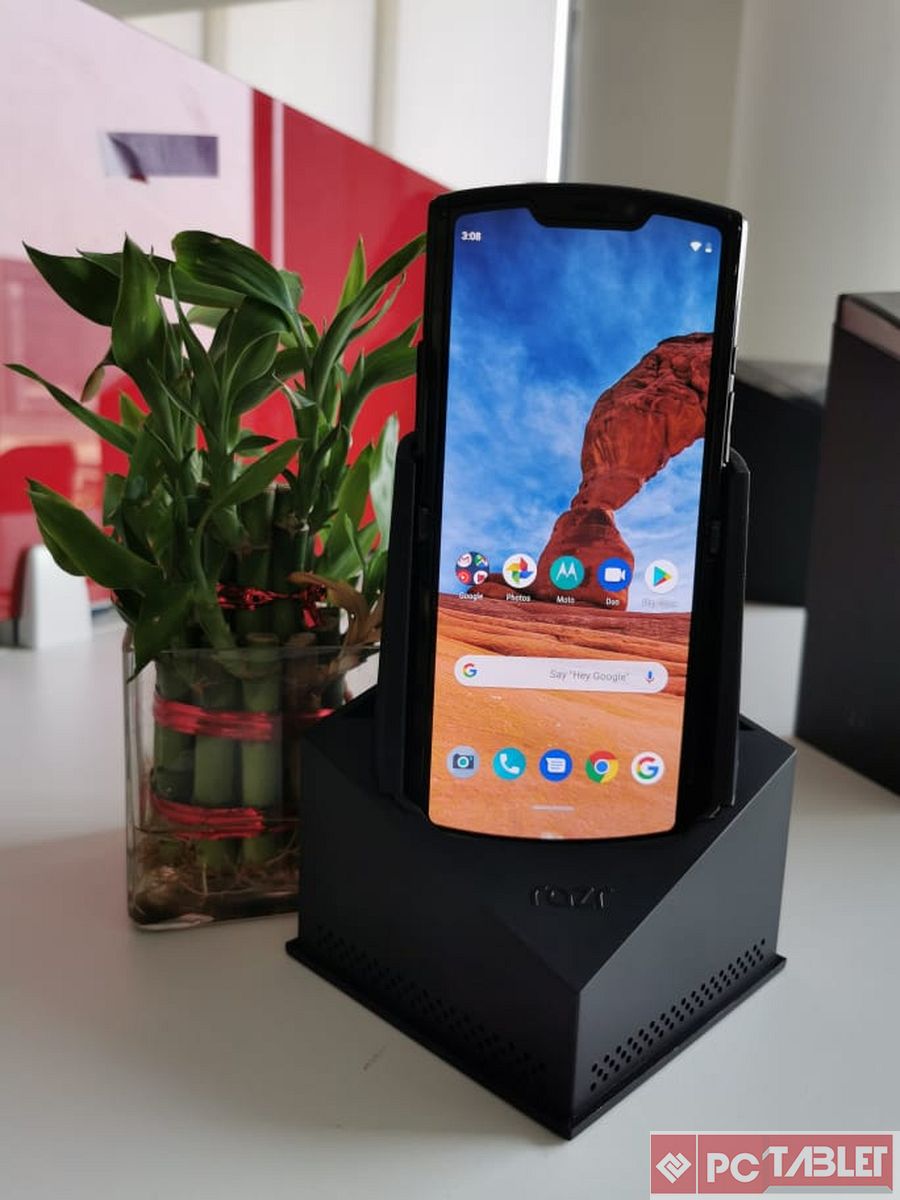 Perks of having a small battery is it charges quickly even with a normal charger. Using the supplied, 18W charger, the phone charged in about an hour and a half. 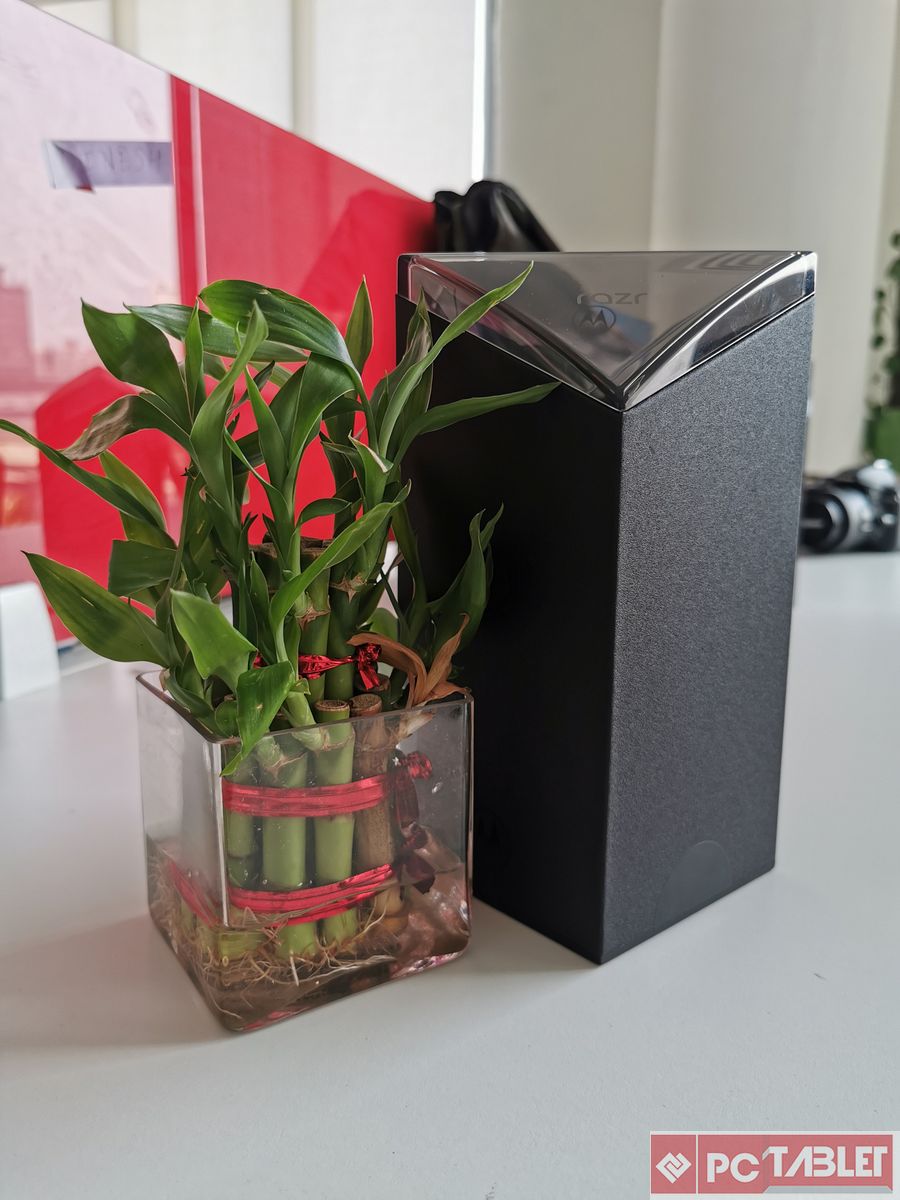 So who is the new INR 1,24,990 worth Motorola Razr for? A person who wants cutting edge design and features and might compromise on performance. The phone sure is a head-turner with the screen unfolded. That being said, during our limited time with the smartphone, we like the sturdy build, the hinge was strong enough although long term sturdiness is subjective. The display feels plasticky and fragile, limiting a more aggressive use. On top of that mediocre internals, below-average camera overall pulls the wow factor a notch down. If you are invested in Motorola’s design language, do put your money on this, else look towards the Samsung Galaxy Z flip which is a more balanced smartphone between the two.