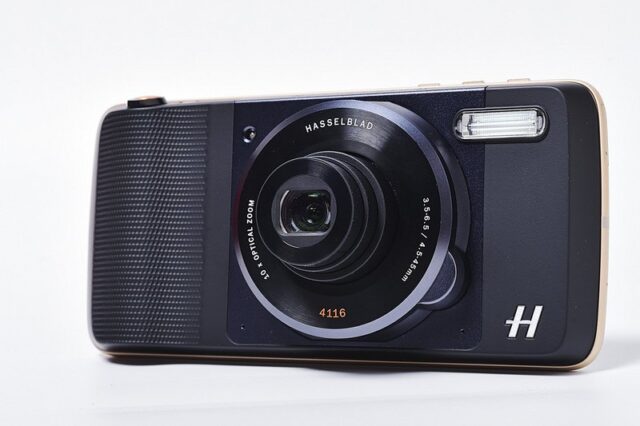 The Motorola Moto Z2 is expected to retain the same design elements of its predecessor. Hence, we are likely to see the connector pins on the back of the smartphone to snap onto the many Moto Mods modular accessories.

For instance, you could strap on a magnetic battery mod for even more battery life, or add JBL’s Sound Boost Mod to attach a completely new set of speakers on to the phone. You just need to attach a mod to the magnetic pins at the back of the device and enjoy a power-packed audio experience. While you may not find it necessary to use MotoMods with the Moto Z Play, but the ability to use these modules certainly gives these smartphones a lot more utility.

Motorola has already confirmed that a successor to last year’s Moto Z is all geared for launch in 2017. In terms of specs, a GFXBench listing reveals that the smartphone features the Qualcomm Snapdragon 835 SoC bundled with 4 GB of RAM and 64 GB of internal storage further expandable via a microSD card. The front packs a 5.5-inch QHD (1440 x2560) AMOLED panel based display. As for cameras, the listing has led to some confusion as Motorola is said to put a dual-camera on the rear but GFXBench only shows us a 12-megapixel sensor on the back capable of 4K video recording apart from supporting autofocus, face detection, and a CCT dual-LED flash. Selfie duties are handled by a 5-megpixel sensor up-front with its own flash. The MOTO Z2 will release with a close to stock Android v.7.1.1., Nougat

As for cameras, the listing has led to some confusion as Motorola is said to put a dual-camera on the rear. However, GFXBench listing suggests there’ll be a single 12MP sensor on the back with auto-focus, face detection, a CCT dual-LED flash, along with 4K video recording. On the front, the device will feature a 5MP camera for taking selfies. The MOTO Z2 will run a near stock version of Android 7.1.1 Nougat with support for Moto enhancements.

The MOTO Z2 is also compatible with the MOTO MODs, modular modules that can be snapped on and off the back of the handset to enhance its camera, battery life, audio, as well camera capabilities with 10x optical zoom.

As far as release date goes, the Moto Z2 could also go official in a month or two. It’s anyone’s guess at the moment, but multiple reports suggest it is likely to happen on June 30th.  Also, the company has announced its plans to make its Moto Z range of smartphones available on other US carriers as well apart from Verizon. In case you didn’t know, the Moto Z-Droid, Moto Z Force Droid, and Moto Z Play Droid are only exclusive to Verizon.